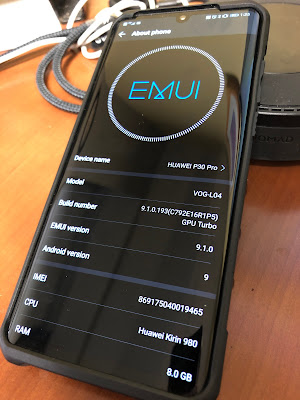 So, I had reviewed the P30 Pro a little while ago, and I called it an 'initial opinion' as much as I did get to use it for a while, the review period ended a little abruptly.  I'd always meant to revisit it and when I had to send in my Pixel 3 XL for some replacement (the pre-production unit I had from a year ago was having some recurring oddities) it gave me the opportunity to dive all in on the Huawei phone (especially as I was now sporting a case for it).

It was fun.  The TL;DR is that there were things I missed about my Pixel, and ultimately it's a few of those things that will have me shelve the P30 Pro as my daily but make it my home gaming phone, but still, the phone was an absolute performance beast to use and I enjoyed being able to throw at it the complex games and apps and it not blink.

Let's dive in on my thoughts and feedback after 30 more days with it.

So first, off, let's hit up what we do like about it.

On paper, every aspect of this phone is just top level.


Aside from the non-QuadHD display, this kills just about any other phone out there for spec wars.  If I had a wishlist for what I wanted in a phone, that's the only thing it's missing.

Super beefy processor.  Fast and snappy with 8GB RAM to switch between without lag. 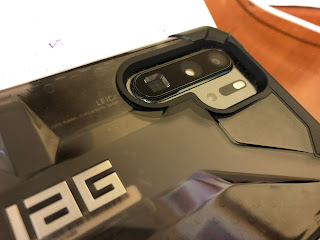 High-quality glass with a 40MP camera to take excellent photos.

A battery that just seemingly does not quit.  It is downright amazing.  It lasts and lasts.

But how is it in practical use?

There really isn't any major complaint.  Every working part does its part.

Each has no problem on its own.  Even how everybody is so scared of 'Huawei' and China at the moment, I have no concern myself.

I do have a bit of a concern with just overall the EMUI.  It's better.  Way better than we saw on the P20 Pro, but there's still something of the era of heavy industrial software to it and little with the 'usability'.

Fine for a guy like me, as I'll delve.  But similar to Samsung of old, that throwing a lot of 'features' can cause it to trip on itself.  Getting more features and buttons and knobs is fun, but too much can make the interface a little overwhelming.

Gesture navigation
I don't know.  I've gone all in, and despite knowing that this is the way it's going to be going forward (i.e. Android 10) I still can't get used to it.  With the curved glass on the edge, it has happened a few times that a bit of a gesture triggers the navigation to go back (playing a game, be careful if something happens on the edges, be cautious as you swipe photos in your gallery, etc...).

That's navigation.  But there are others.  Like you can swipe up from the corners to bring up the assistant.  That's neat, but you have to use it enough to remember it's there.

Then there's the screengrab or video with knuckles or 2 fingers.  There are so many 'options' that remembering that something exists, it's easy to forget how it's done.

Mistaps
Similar to the gestures, I've noticed whether it's the edge, or the fingerprint sensor, or something else, that I've had some mis-taps.  Noticed this that as using the keyboard (and I'm using GBoard) that it had huge amounts of mistypes or misspellings... something I'd never seen before, but on this.

Sometimes just holding the case it might register a touch on the screen.  Playing the Jurassic World Alive game, if I hold it in just the slightly wrong way and I kinda look away and my grip slightly changes, it'll hit a different tab.

It's subtle... like I said, it's that just slightly wrong way, and if you take focus away from it that your wrist or something changes that I'll look back at the phone and see I'm in the phone app.

Similarly, the in-display fingerprint works 95% of the time (I'm picking that number arbitrarily) but the 5% of the time it doesn't work, it's really not working with that finger until I try another finger.

Reverse Charging
Okay, I was excited about this.  Plug in my phone and then it could charge my iPhone.  It doesn't work as you would like to think.

When I would go outside to relax, because this is just a monster of a battery, it'll be super high up, but my iPhone will be low, so I'll plop it into that mode (and you have a bit of a rigamarole to go and find that setting) and put the phone in the right position and it'll register.  But like 20 minutes will go by and the iPhone will only have moved 1%, and the Huawei will have taken itself out of that mode (it does that by design).  I don't know why.  I've fiddled and fiddled and even when it's the perfect scenario, it's still a very very VERY slow charge.

It's not a deal-breaker, but it's sad.

[I'm at the end of writing this article, and it's been about an hour that I've had my P30 on cable charging and using reverse charging for my iPhone and it hasn't moved a single %]

Battery
This battery just seems to continue to never need to be charged.  I've played an hour or 2 on it and it's only gone down like 20%.  Like heavy games.

It's odd, I'm used to making sure I bring a charger or something for longer outings, just in case, and then with this phone, just never need it at all.  Such a refreshing change.

I did notice that it's finnicky for the Qi.  I have 2 stands on my nightstand.  One it just won't work with (the holder puts it at an awkward position where it can't register), and the other you have to really put it in the right angle/position for it to charge up.  Good thing I don't have to rely on it to get a Qi charge, it still is usable in the morning for another day regardless if it got a charge over night or not.

Camera
Okay, the camera is good.  I'm still partial to the Pixel's processing, but it still takes some AMAZING photos.  You probably couldn't tell the difference between my Pixel and this phone. 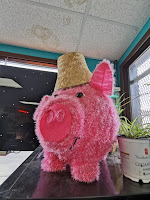 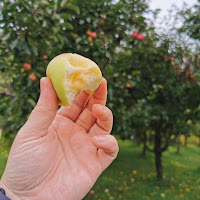 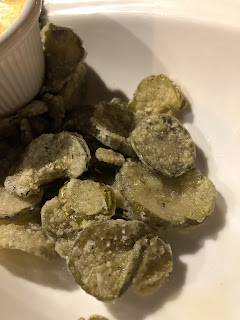 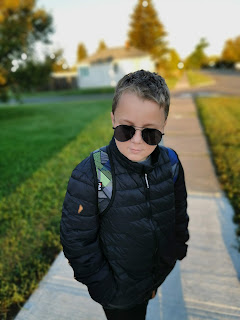 I love the photos it takes.  Good colour, good detail ... my problem only is that there's a fair amount of 'tweaking' needed.

I loved being in US Bank arena watching my son play football and use the zoom lens to be able to get up close with him. 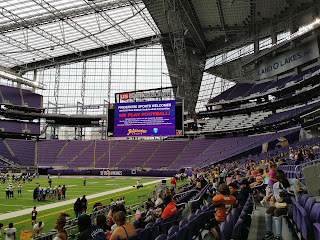 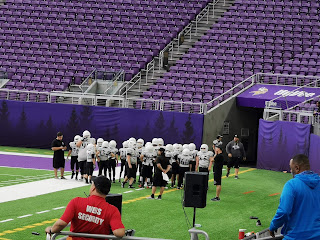 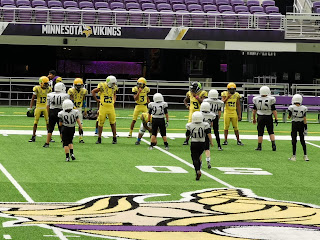 (yeah, look at the size of those 'kids' we're up against)

It was awesome.  But I also like to get the best megapixel as possible, so I leave it at 40MP, but to zoom I have to switch the resolution to 10MP then I can do the zoomy slider thing.

I like the DOF option, but I have to make sure it's in portrait or aperture mode.

Sometimes I like HDR or ... or ... there are a lot of really great modes to shoot in, it just takes time to get there.  Nothing wrong with that, you just gotta be prepared.

Battery
Did I say that this was a monster of a battery?  Because, like ... it's huge.  HUGE!

Googley goodness
Now, I'm used to logging into a device with my Google account and then suddenly everything syncs.  Especially the password sync.  I swear this worked on my original P30 Pro, but with this one, I've not been able to get it to work.

Curious mishaps
Now, this is a little 'unsubstantiated', but I've noticed a lot more "well that was odd" moments with this phone.   Whether it's a notification that doesn't have the right drop-down option or sometimes the keyboard disappearing ... it could be the odd screen size, or whatever ... just happens enough of something "that's weird" and then it's fine that I've not had.

Keep in mind, that by no means is this a daily or weekly occurrence, just a once in a while.

Then there's things like I can't go into the settings for the notifications.  Things just seem to be in odd places or that if I want to change settings for the calendar or the SMS etc... it's not made simple to do.

I can see for 90% of the people out there they'll never be looking for these settings so it's probably a moot point.

Glass
Okay, I love the Leica glass for the lenses on the back... but the glass on the front is definitely not a Gorilla Glass.  I cannot tell you how aggravating it is to seemingly always find a new scratch or mark on it.  I baby the hell out of my devices, and my work daily phone, or my Pixel 3 have been used heavily yet show nowhere near the same level of 'abuse'.

This can be overcome with a good case or even a screen protector (I love that liquid nano stuff).

This is a helluva great phone.  Every part of it has muscles and brains.  Just some of the interconnecting tissue has a bit of a weird feel now and again.

The battery life is PHENOMENAL (noticed I put in there twice).

I still miss my Pixel tho' for simplicity.  So much of what makes this phone awesome means playing or fiddling with something else.

Or you could just use it and not fiddle.  It's still going to be amazing, just I think you'd be missing out.  It has such immense potential.