Posted by Ryan Moore on June 26, 2019
I'm really wishing I can leave the PC world behind.  I'm so close. Were it not for work and the occasional need of a very specific piece of PC only software, I would be able to leave it all and go straight to a mobile platform.

What's really helping is not just the evolving platform and support for more web/progressive apps, but the better and better hardware.

Not just phones, but the laptops.  I'm still loving my Pixelbook every moment, despite its age it still performs very well.  Then comes along the Chromebook Flip - this is the Asus Chromebook Flip C434T. 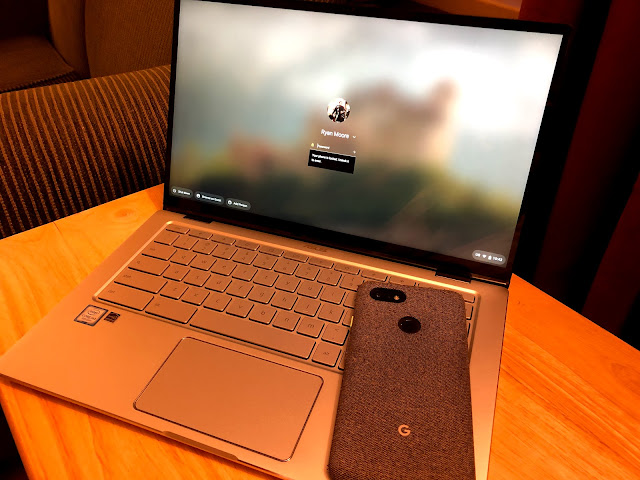 I'd received their base version, the one with the Intel Core m3 - and it has the minimal amount of RAM for the model with just 4GB.

Even though this is pretty much the minimal model for specs, I have been immensely impressed by it.  Like it's a big jump up in terms of how fluid it is compared to others I've used.  Plus, it's also the touchscreen variant, so that already bumps it up a hundredfold for me.  And this runs for $699.99 at BestBuy.

Okay, on to the review. 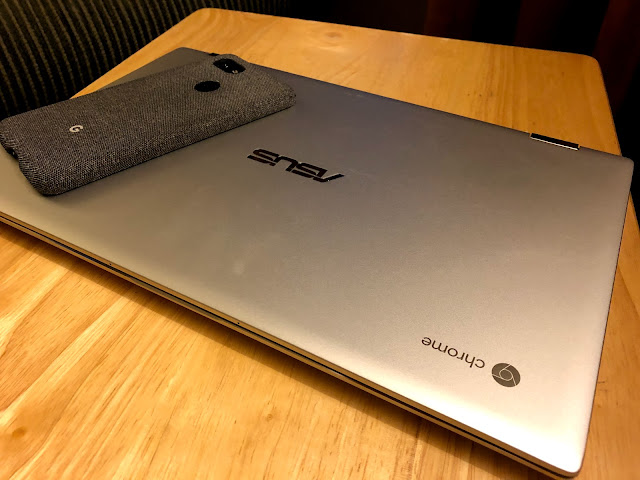 Taking a look at the physical block, it's a nice package.  Simple body that it looks pretty small, but the screen is so large.  The monitor has Asus' NanoEdge display with a very slim bezel to maximize the display on it.  So it's deceptive.  Which is a cool thing.

Aluminum looks cool but it adds a slight amount of weight to it I wasn't expecting for it's smaller size.

Going around the body we see it's got USB-C (yay, I hate those proprietary plugs...) and similar to the Pixelbook it has one on either side that are both usable for charging (there had been some Chromebooks where only the left one was the charging port, the other was an accessory). 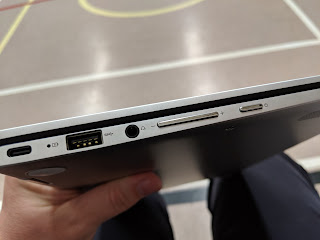 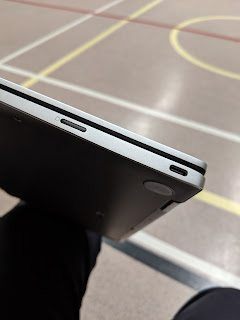 There's a microSD card slot (interesting that it eschews the regular SD card, and goes straight for microSD as that seems to be the more popular card these days) on the right, and on the left we have the headphone/headset jack, a USB-A as well as the volume and 'power' button.

To open it up it's nice that it has that little 'lift notch', which I'm so glad to have. 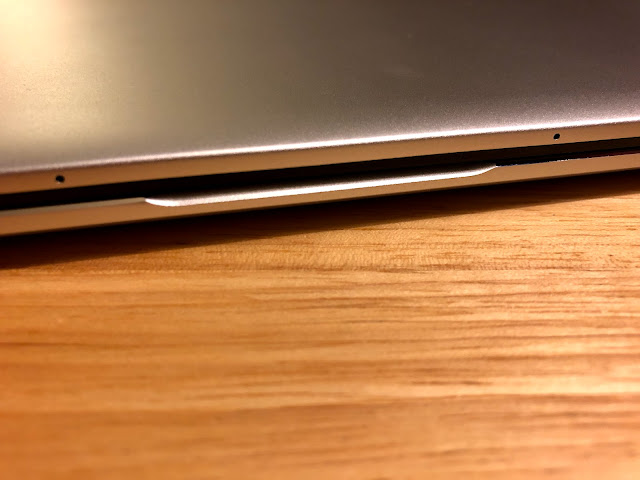 It's funny how something so small makes the very simple things easier.

The keyboard looks like every other keyboard out there, but first up, it's light up... and not like the Pixelbook where it's a little bit of light, this is noticeable and very well appreciated.

There's something else about the keyboard and it's subtle.

The layout on the top row is just slightly different.  I noticed that the was a 'forward' button next to the 'back'.  It took me getting out my Pixelbook to see the difference.  On the Pixelbook there was no 'forward' and then there was a play/pause button, plus a 'menu' button.  Those aren't on this.  Lose those to add the 'forward' and a 'lock' button (is that redundant to have a key on the keyboard AND to have a physical button on the side?).  It's not a complaint, just that tiny little subtle difference that bugs at you for a bit.  Clearly, I didn't use those keys as heavily enough to notice they were missing.

Cool all around thus far.  Nothing new, nothing amazing, but just subtle. 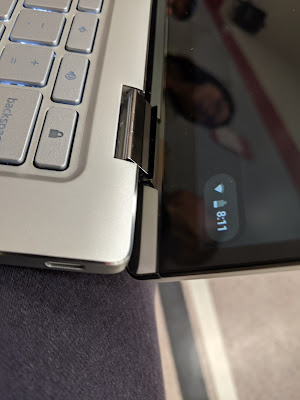 Then there's the whole reason it's called a 'flip'.  The screen has a hinge that will let the display rotate the full way around.

It was embarrassing as when I first got it, it did not look like a hinge that allowed for that and I had in my notes "I thought they called this a flip".  It was a day or so until I checked again and sure enough... yup, it flips all the way around.

I'm still uncertain of how I'd want to use it in that kind of matter ... you can have it in 'tent mode' or as I call "reverse laptop" where the keyboard's facing down and you can angle the screen away from you.  Or just have it all around and use it as a tablet.  I still don't like having the keyboard upside down on the table... As soon as the keyboard hits a certain angle it disables itself so you don't accidentally type.

The screen is good.  I'm not 'wowed' by the colour or brightness.  It's good.  Which is on par with what you'd expect, and I doubt anyone would notice the extra resolution or pop in colour.

My favourite part about the screen tho is the fact that it's the touchscreen.  I really cannot understate how awesome it is to have.  I probably don't use it as much as should to probably warrant needing it, but not only is it a "yay, I have it", it really comes in handy and it helps to remind me that I'm on a "MOBILE" device.  This is the future of interactivity with a device, and maybe it's just psychological, but omitting it feels like a step backward.  It just feels intuitive to move a finger forward towards the screen rather than use the thumb for the touchpad.

And speaking of being reminded that it's a mobile device, like most Chromebooks now, it incorporates Android's Play Store so you can install most Android apps as well.

There's even the option for the Linux Beta ... I don't think I've seen the settings so out in the open before on others, then again, I haven't been looking. I'm miles away from being even somewhat familiar with Linux, so for me, it's definitely not a feature I'd be exploring. 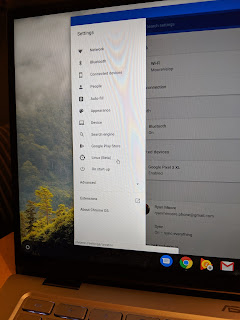 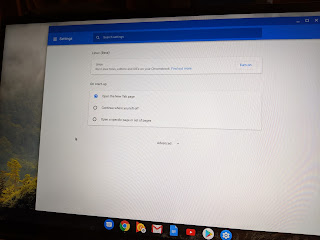 Using the device, like I said, even though it's the lowest for RAM I was greatly impressed with how it performed. Smooth, fast.  It's like you had removed all animations and things just happened instantly.  Very impressive.  It feels faster than my Pixelbook.  I wonder how the higher end variants feel.  I don't know what you'd need to be doing to have it need more 'juice'.

One of the more pleasant features I found while using it was the quality of the sound. 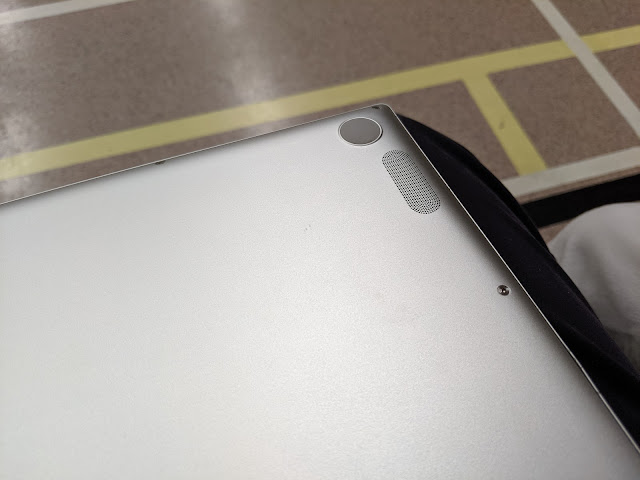 The speakers look fairly large but they face downwards, so I was going to assume a muffled sound.  But, because of the way the hinge works when you use it the speakers have good clearance, and the 'low voice coils' it has an impressive range of reproduction as well as volume.  Pleasantly surprised!

Battery life has been about what I've expected.  The claim that the battery should last you 10 hours is not so out of the range of possibility.  I'm sitting here, and I've not measured how long I've used it ... but... I started about an hour ago when it had 25% left, where it said about 2 hours left (and that varies from 2 - 3 hours depending on what I'm doing).  Approximately an hour of writing later and it's saying 21% and 2 hours, 20 minutes left.

Extrapolating, you definitely see that it can range in the 8-10 hours easily.

Being that it also uses USB-C to charge (and thank the lord you can use either side) recharging it will be a snap.  I say 'snap', but remember it does need a high wattage charger else it'll give you the dreaded "low power charger" meaning it just slows the discharging.  But, I've got USB-C charging cables and packs everywhere so at worst I could use a low power if I needed it.

Overall, I'm very impressed by this device.  Sure, it's not as cheap as some of the other lower priced Chromebooks out there, however, it has the performance chops to justify the price.

And the gap between a 'pc laptop' and a Chromebook is slipping.  It's been fun to introduce more and more people to Chromebooks when they think they need a PC and then we walk through and ask them what they use and they realize that a Chromebook is more than enough for them and as a friend recently found out, it was not only 'enough', but it also saved them money versus a comparable Windows or Apple product.

I think we're at that point, that most people could switch out and never realize the difference.

This is definitely as Asus says themselves ... "a 13" laptop with a 14" display", it's a tiny little package that punches out a great performance.  I guess what they say about good things coming in small packages is true.