Eneby 30 - a speaker from Ikea with no assembly required

Posted by Ryan Moore on August 15, 2018
So, whenever we go on trips to bigger cities, one of the places we like to visit is Ikea.  Not just for the Swedish meatballs ... tho that is a draw.  But it's cool to walk through and get ideas on how we could lay out our house (if we had a clean house :P ).

On our last trek through the store I noticed they had a little bluetooth speaker.

Turns out they have 2 different kinds.  The Eneby 20 (smaller, can be portable with optional battery) and the Eneby 30 (larger).  Either are meant to be plugged in and you can get wall mounts for them so they fit into the 'decor' of the scene.  And, either come in a 'black' (more grey than black) and white (kinda more white-ish grey).

So we have the 'black' 30 model.  For $99 it's a neat bluetooth speaker that is meant to be a little more stylish.  And no assembly required! 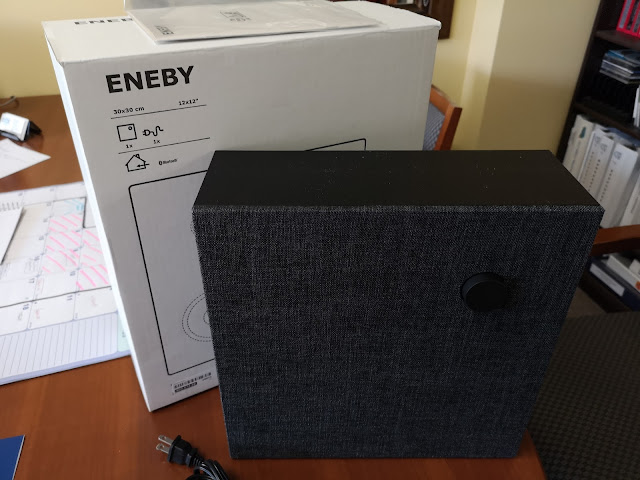 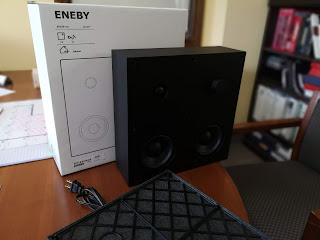 The speaker has a mesh 'grille' on the front that helps to 'hide' the speakers, and looks a little nicer and depending on who you talk to in the audio world it helps to soften the sound.  It's easily removable if you want to.

Also on the front is the volume/off.  Tap it and it turns on ... and it's immediately searching for something to connect to (more on that later).

It's the only control you have on the device whatsoever.  You can also press the button for 3 seconds where then you then adjust (turning it) the bass level.  Press it one more time and you'll be adjusting the treble.  Press it again and it returns to controlling volume.

It's a little awkward and would really have been nice to have some indicators somewhere on how much bass/treble it has.  Or even volume.

If you hold the button for 10 seconds it factory resets (i.e. forgets the bass/treble set and any BT items it's paired to in the past).

What's really missing is that for a BT speaker, there are no playback controls.  That would have been handy, but I guess if it's meant to be sitting on your shelf somewhere, you're not getting up all the time to change the music.  But still...

On the back, there is the port to plug it in (nice that it's just a cord and not an adapter).  Apparently, there is a battery option, but on the website, I only see options for the 20 model, not this bigger one.

Chances are you'll be using your device to feed it for music.  If you ever do plug it in, the line in overrides the BT.

So let's talk sound ... I have to admit, I was a little underwhelmed on the output volume.  Sure it got loud, but for a bookshelf speaker, I expected it to have a little more punch.  The sound was decent but didn't really wow me for quality.

At $100 I wasn't expecting it to go toe-to-toe with some of the bigger speakers (like the Home Max or the Samsung Shape), but it's only slightly better than some of the portable models like this one from MPow.  It's not going to be replacing my soundbar or any of my stand speakers (which I just recently moved to my garage).  So maybe for my son's room or somewhere similar...

Where it could have excelled and really played the role of the bookshelf speaker was if you could pair 2 of them together.  Remember Sony's cubes?

Having 2 would have really filled the room better and had it stack against something more.

The other issue I had with it, and this isn't its fault, it's the way Bluetooth works.

So, if I set up the speaker initially, it goes into pairing mode looking for a device.  I grab my phone and pair it up.  Cool.

Then, later on, I can turn it off.  Turn it back on and my phone automatically connects again.  But what if I want to connect my tablet to it instead.  I have to let it connect to my phone, then set up my tablet, or my Pixelbook, etc... to connect to the speaker.  Now it'll override my phone and play music from the tablet.

If I turn it off again, and then turn it back on, it'll see whatever item it sees first (closest) and be connected to that.

Overall, for $100CDN, it's not a bad buy, and the permanent cord is a nice feature if it's a speaker you'll leave always in the one spot.  Plus, getting to pick it out means you get to go hang out at Ikea and you'll always find something else there that you'll like. :)
accessories audio bluetooth Eneby Ikea Speaker