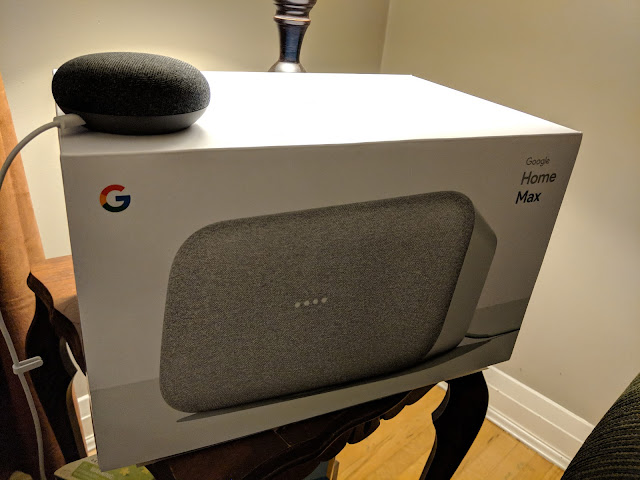 The Google Home devices are a hit all around.  I can't find one person who has one who hasn't liked it, or started to see where they could put another in their house.

Now, up to about last year if you wanted the Google Assistant you had just the "Google Home", but then they introduced the 'mini'.  It was the perfect size to hide just about anywhere and was just the right price.

Then they also said there was to be the 'max' and it took a while to come out.

And then it was available, at a whopping $499CDN to purchase... came as a bit of a shock.  But I still thought, why not.

The box it came in was quite the shock.  The price tag was starting to take shape.  This Max was seriously big.  And heavy. 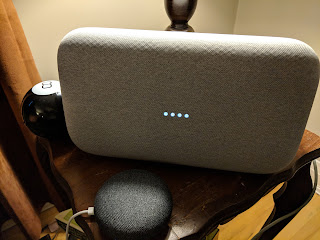 Before I get into anything else, let's just remind you this has the same 'brains' as the Google Home Mini, so it's not going to be doing anything different than what it can do from an Assistant point of view.  Play form your Google Play Music Library, answer searches, play the odd game etc..

The only difference here is going to be the sound quality ... oh, and it does have a 1/8" jack input for music and Bluetooth connectivity if you don't want to 'cast' to it (i.e. I want to take this out to camp and there's no WiFi out there).

It still has the 'microphone kill switch' on the back when you want to be 'private'.

There's the headphone jack for line input and then USB-C input as well, but I'm assuming that's only for wanting to apply firmware updates or the like as it wouldn't do anything when I plugged my phone into it. 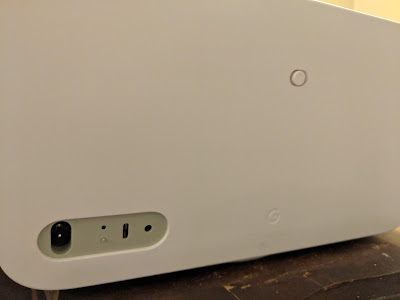 Power is also handled via an AC cord rather than an adapter and microUSB (which my son was fond of unplugging from the mini to charge his device on the couch).

Outside of that, when it's in horizontal mode the 'interaction' buttons are on the top.  The centre is a play/pause button and then there's a 'slider' on either side for volume.  Instead of tapping the left or right side, you actually swipe your finger left for vol- and right for vol+ on either side on that bar area. 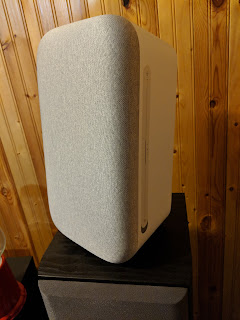 Now, the neat thing is you can place this in either horizontal or vertical mode, where you just stand the speaker on its side.  They prefer you to place it on it's 'right' side over the left (there's an orientation sensor) ... the difference now is you swipe up to increase volume  (i.e. towards the vol-) and swipe down for quieting it (i.e. towards the vol+).  It seems right, but looks wrong with the labels.  Remember you could also just say "ok Google, turn the volume down by 15%".

The neatest little thing is they give you a little rubber mat for it.  And there's a little magnet in the mat that fixes to the right spot on the Max.  I'm supposing it's to protect your surface of the table or whatever, but I'm also wondering if it has to do with the orientation sensor.  Hrmm... maybe I should experiment. 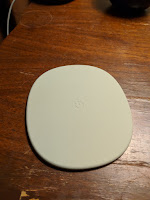 Anyways, did I mention this thing is big? 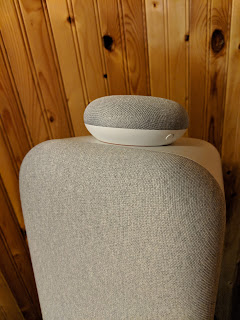 Look how it dwarfs the mini.

And that size comes not only with heft, but some good specs.

Now, I don't see any specifications for frequency response or  wattage ... not that it really matters.

What I can say is that it almost outperforms my Samsung J450 soundbar at 450 watts.  It may not get as loud as the soundbar can at the top end, but it keeps the sound as clean and clear.

It won't truly compete, but it's near enough as matters, as I never really turn the volume up that loud anyways.

I couldn't swap it for my soundbar, because I like how mine does the audio switching between several of the items.  Where this would only be able to handle items that cast, connect to BT or one hard line in.

So, it's limited in that capacity.  But it's not lacking in sound quality, that's for sure.

Now, the extra neat thing about the Max is you can set it up as a pair of speakers (holy, can you imagine the volume 2 would put out?).  YOu'd have to shell out another 499, but in the Home app there's a setting to set up the speaker pair. 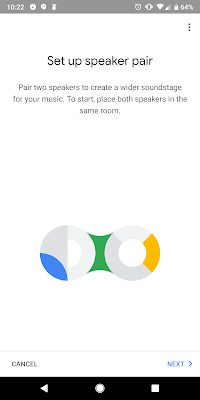 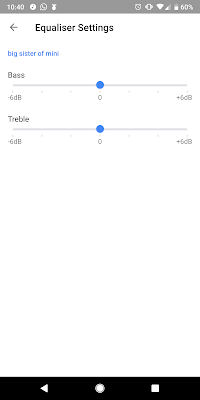 There's also a setting for an equalizer settings, I don't remember seeing in other speakers (but I double checked, it is there too).

All in all this is a kick ass speaker ... even better than my all time favourite, the Samsung Shape.  It's just very pricy.

But, if you look at some decent speakers or soundbars, the price is pretty comparable, plus it has Google's awesome Assistant built in.

Going to love freaking my son out with the 'broadcast' command if he's near it.
accessories Google Assistant Google Home Max Review