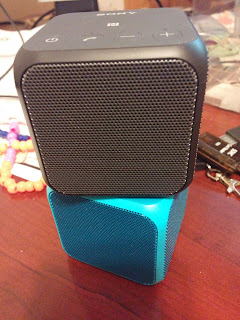 I love Bluetooth speakers.  I don't know why, but the idea that, if given the space and time, I could rock out to my tunes on more than just my headphones or phone speakers is pretty cool.

I've reviewed lots of portable speakers over the time, and these little cuties from Sony really steal the show for cute factor. 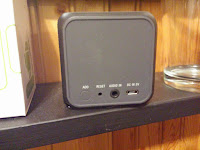 It has microUSB charging (where the battery should last about 12 hrs) - it comes with the cable but not the charger block (if you use your computer it would take about 8 hrs to charge); as well as a hardline connection for audio input if you want to do something other than Bluetooth (but why would you? cables are so... old).

Now some might balk at $80... it's a bit steep, I'll admit, but it really packs a bit of a punch for sound quality for its size.  It's very easy to put in any bag and take with you.  The bonus above others for the same size is that it also has speakerphone capabilities by having a microphone built in by the speaker.

As is nearly required by any portable speaker these days it uses NFC for one tap connection.  I don't know why more speakers don't do this... it should be mandatory.  (oh, right... Apple only just started using NFC... so it'll be invented by them soon)

Tapping once will get it to pair and you'll never have to pair again when you turn it on, i'll reconnect automatically.

The rubberized joints makes it feel like they can sustain a bit of abuse, which I'm sure is true.  You may also think it could be water proofed, with Sony's history of IP rated devices, you might be on the right path - but it's not true.  So don't play with them by the pool.

The real fun begins when when you grab a second device to play with and give your music a real stereo treatment.

See, there's these little 'add' buttons on the behind of the device.  The basic jist is to turn both devices on, and then on the first hold it down until it beeps and you'll see that some of the lights under it will blink, then do the same on the second device.  One will assume L/R, and if you hit the 'add' button again you can cycle between if it'll be L or R or both (and the other speaker will switch to the R or L or both). 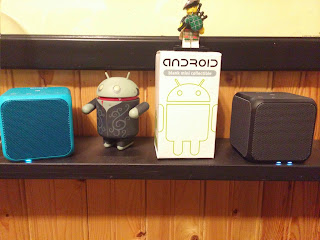 Coolest of all is that once paired to each other you just have to turn one off and it'll turn the other off automatically (but you'll still have to turn them both on).  When you turn one back on it'll act independently until the other one is turned on and then it'll take on the 'stereo mode'.

So my downsides to these devices are that:

Note of caution: from the video you'll see that I'm using my G2 to fuel the speaker for sound; for some reason it does not work with my G3.  The sound is all glitchy and stuttery.  I've tried them with every device in the house and they work fine EXCEPT for the G3.  Don't know why.

Overall - I think the downsides are easily overcome once you start using them - you'll like them.  I just wish that they were water proofed in someway - not that I have a pool; just it would give me the peace of mind that they could take a little more abuse.