Posted by Ryan Moore on December 22, 2014
We've reviewed a few different wireless speakers on this site (my favourite portable one being the 808XL). 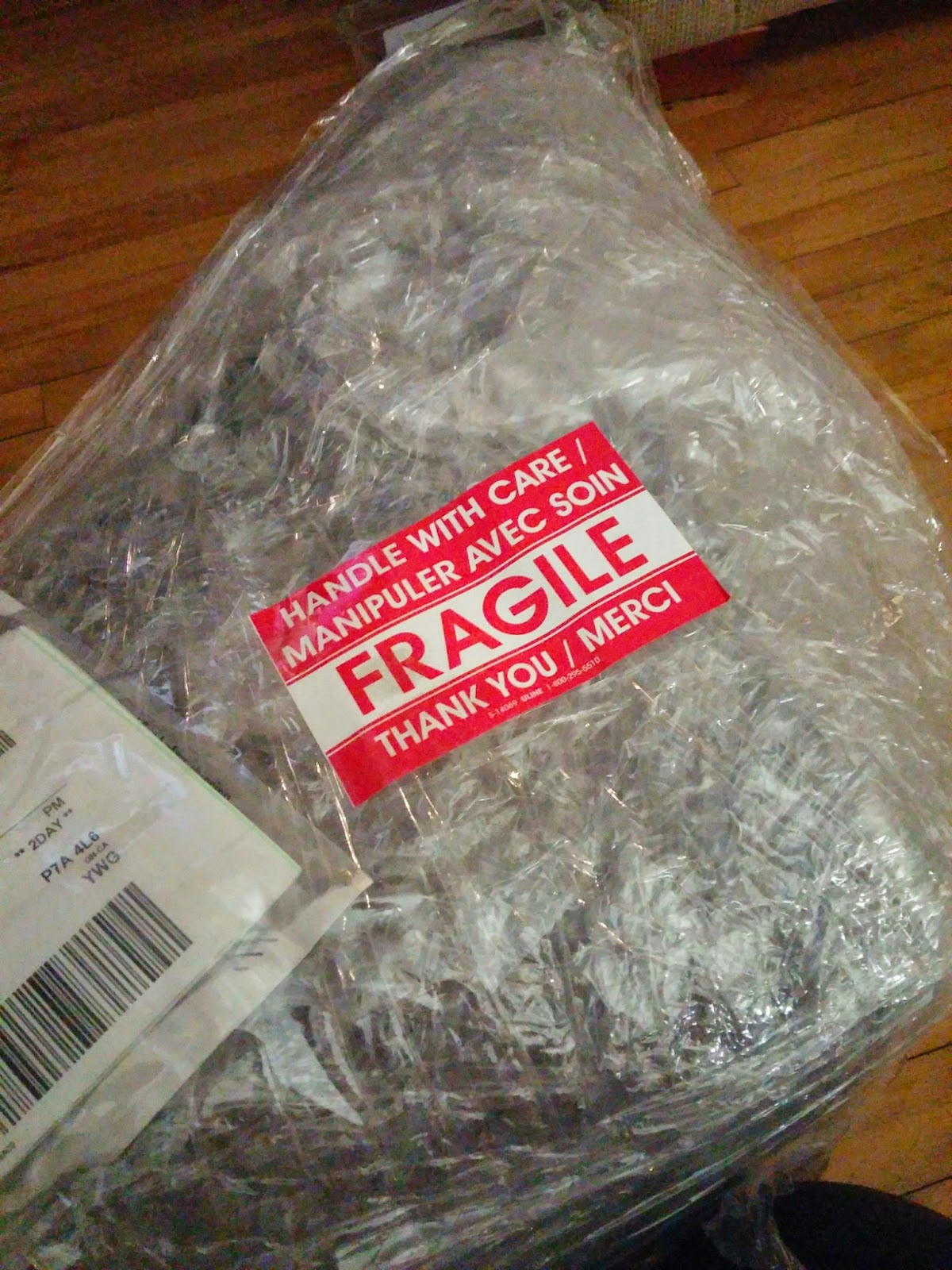 And then Samsung sent me their Shape series M7 wireless speaker.  This was quite the hefty item. I'm used to getting various size packages in the mail for the site, but this one was quite large, being about the size of a decent PC.  The package was also substantially heavy - to me, that means that there's a considerable magnet in there to drive the speakers.

Plugging the device in was pretty simple - and you have 2 options to set it up.  You could lay it down horizontally, or put the 'stand' backing on it and have it stand up vertically.  If you put it up vertically then the soft touch buttons are now on one side.  You don't really need them, but just remember where they are. 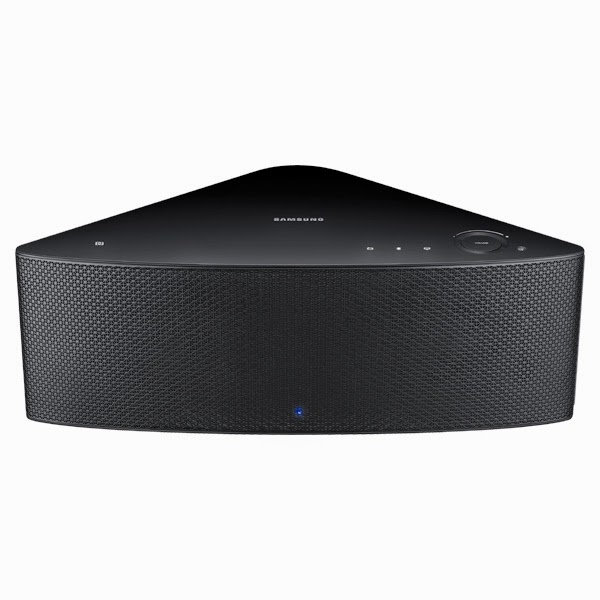 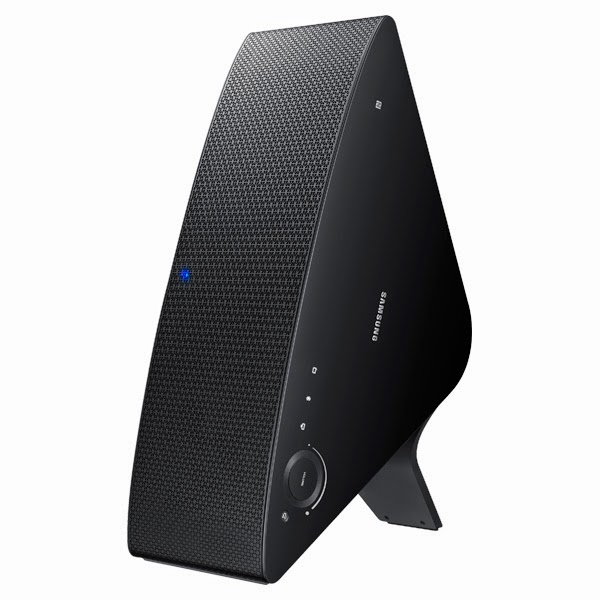 Setting it up as a Bluetooth speaker was as simple as just tapping my phone to the NFC tag and it was done.  Tap it again and it's disconnected.  Once connected you just use it as you normally would any speaker, and it is AWESOME.


Of all the items I've ever reviewed... ever... this was the first time my wife said to me "we have to return this?".  It was that good.  I wish I could show off how much better it is, but it just wouldn't translate if I were to do a recording.

The speaker's weight really hinted at some quality oomph, and it sure delivered.  I never even had the speaker beyond its halfway point for volume and there was no perceived distortion whatsoever. 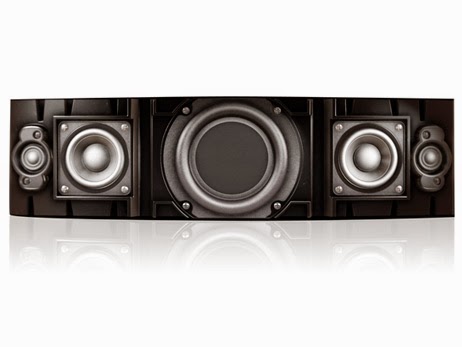 I've not been able to determine what the power output of the system is as a whole, but it doesn't matter as the volume and quality are there and perform almost as well as my home theatre system. (CNET has it listing at 70W RMS with 35-20kHz, with 65dB)

So from that simple interface standpoint it's amazing.  And then Samsung has a few more tricks up its sleeve for you.

Primarily this is touted as a home theatre or 'space' speaker for your home, so it's mean to tie into something bigger than just your phone, and that's where the app comes into play.

The final step was a little more ... trickier (for some reason the first time I tried it wouldn't see other WiFi networks, so I had to manually enter my SSID.. the second time it was okay).  It wants to be able to connect to your Wifi so that it can connect to other devices (i.e. if you had a hub) or if you want to use the streaming services (more on that later).

To set it up on the WiFi it had to be done via a button in the back, but the backing plate is blocking it, so you have to take it off, hold it down, then do something on the phone and then put the plate back.  A little trickier, but you only have to do it once.

Once connected in the app you can rename your speaker to whatever you want (living room, kitchen, garage... etc..) and adjust some of the settings for the equalizer, and turn off/on dynamic range compression (purists like to have compression off, but really for most, there's no negligible difference).

Then there's the other settings.  You can change the source of the music to be either BT (i.e. your phone), or via whatever the Hub is sending out or an online service (currently is limited to a few services - and I don't have an account for any of them personally, so I never got to try it out)

The speaker does have its own Wifi, so you plunk in your service's credentials and it will do the streaming for you (and just control it via the app).  How that'd really differ from doing it on your phone and then using BT only differs in the fact that if you were using BT on your phone, any sound your phone has would go through to the speaker (i.e. hangout notifications, or if you decide to go play a game ... etc...)

Then, if you had more than one speaker (i.e. you had a hub system set up in place) you can then control how each of the speakers are connected.  So you could group that speaker with others and have it act as a component of your home theatre; that way they act all in concert with each other.

I only had the one, so I didn't get to bother pairing them with others, but what I did play with was still VERY enjoyable.  We've been trying to get more into the spirit with using Songza and their Christmas lists and blast them throughout the household, and it really is a clean, crisp sound, no matter the volume.

For my set up, the app was unnecessary as I would choose what I want to listen and send to the speaker.  If I wanted to have music on all the time where it would stream on its own, then I'd want to have the app to control it (and probably do it from some central device, like my tablet).  Although it was nice to be able to control the volume on the speaker and not just limit the BT volume (so if I really wanted to crank the output).

Now, would I recommend this?  A lot of people will balk at the price.  Samsung has it listed as $500USD (on sale for $230).  At the sale price of the $230 it's a good price as it really does compare to my own home theatre equipment that I've piecemealed over the years and I've spent way more than that per speaker.

It really does fill whatever room you want to put it in, and it's shape and size are such that it could almost fit anywhere.  There is a definite difference in quality from the standard $100 speakers and this one, way more than what the price difference might suggest.