Posted by Ryan Moore on November 10, 2016
A while back I reviewed the Mpow Armor a handy little speaker with some resilience to take a beating and still sound good.  I have it in my room for when I want to do some housework and it does well.

But sometimes you want a little more boom, and for that, there's the Armor Plus by Mpow. 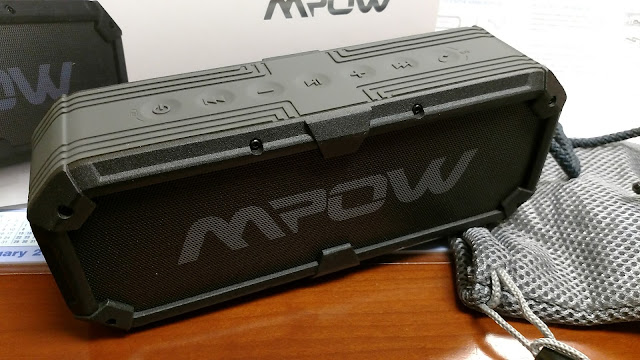 Now, sitting at $90 it is more costly, but cheaper than several other options I've seen for the size, and it throws in the sturdyness of the Armor lineup.

For $90 you get some power 8W speakers (x2) and water / dust protection of IPX5 (so you can take it near the pool, get it wet now and again and it should be fine).  For that protection there's a rubber coating around the device that not only acts to protect it, but gives you something to easily hold on to it.

And it's hefty, to be a stereo 8W speaker it's going to have some heft to it.  To add to that heft there's also a large battery.  This 5200mAh battery will allow the speaker to last for like 22 hours (I ahven't had the opportunity to get it to play that long).

A better use for the battery can come into the fact that you can also use it to actually charge your device on the go.  Plug in your cable and go.  So, good for the longer trips where you can sacrifice some play time to gain some phone time. 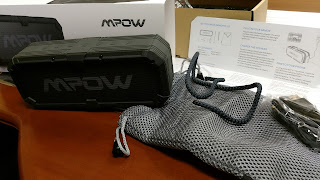 Now, on the device there's your standard buttons ... I love it when there's volume buttons and navigation buttons!  There's even a call button, as you can double the speaker as your loudspeaker for the phone and there's a mic contained on it to handle your phone calls.  Neat. 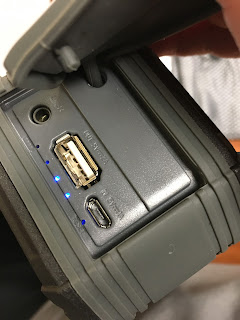 My favourite feature is that there's a battery meter hidden under the flap where the ports are.  It's just a simple 4 LED dots to give you a rough idea of how much power's left.

Okay, but enough of all the extra features... the real question is, for that price, how does it sound?  Really good.  It can push out a good amount of volume and keep it a pretty clean sound actually.  At top volume (you'd have to be outside because in the living room it gets too loud for me) it can get a bit 'squelchy', but that's at extreme volumes, and at that point you're going to be some distance away so it's not going to be as noticeable for most people.

All in all, for $90 it's a good deal for a quality speaker that will put up with some heavy use for a long time.  I think if you're in the market for something a little better than your typical small portable, this is probably what you should be looking for.