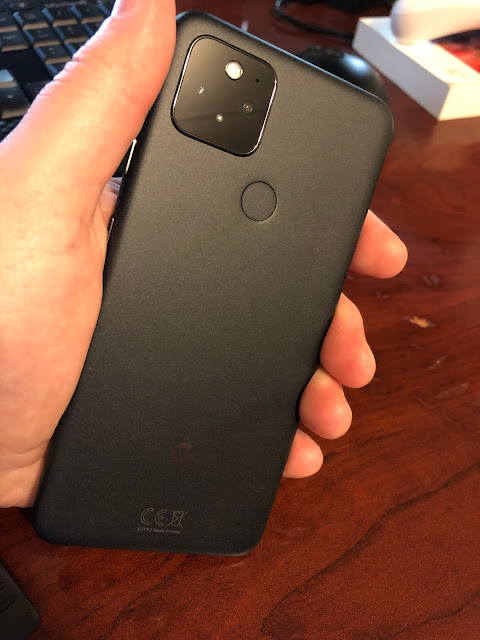 I have to admit, when they first announced the Pixel 5 I was looking for a total replacement to the Pixel 4 XL and it was going to be awesome.  It'd stack up against other full, high end flagships and other cellphone addicts and enthusiasts would be jealous ... I was hoping for that, but we got what looked like the 5a.  A small, non QuadHD with a less than top of the line processor.

I was kinda disappointed.  And that's just indicative of the tech snobs like me. We've become somewhat blind beyond the paper specs... and I think Google knows that and is trying to teach us a lesson.

We'd seen this in the past with the Moto X, or remember the HTC Ultrapixels.  Just because the number was 'small', doesn't mean it can't perform 'BIG'.

After a couple weeks with it, I'm definitely seeing the light.  But it's hard to not keep my nose in the air and wish there was the 'full flagship' version (I'm crossing my fingers a later release will happen, but I'm not holding my breath).

Besides, it's only $799 (similar in price to the LG Velvet), so let's visit it and see if it's a suitable next iteration:

Okay, let's take a look at first the specs of what this phone gets:

Right, on the face of the numbers it doesn't look so impressive... to me.

So from the 4XL it's a drop of ~$300, you take out the 800 series SD, the Quad HD and .3"... but you gain the fingerprint sensor (yay), a wide angle camera, 2GB extra RAM and there's reverse Qi charging now.  You also no longer have the 'soli' radar, which I am TOTALLY fine with.

But it seems like I'm giving up more than we're gaining.

Let's use it and see what happens.

Handling the phone it has this new 'texturized' back. 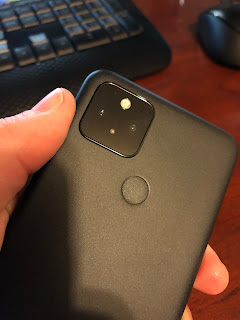 It's diferent, and was a unique change for the hand - phones have always been smooth, except for the LG G4's leather back plate.  Damn, I loved that phone.

Instaneously tho, I put it in their case (which you can see in the unboxing). 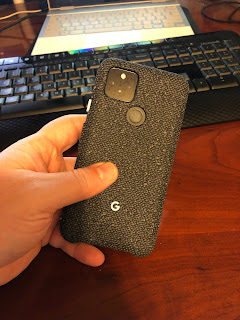 Having the fingerprint reader is just my preference - and I enjoy going back to that (although, as it's starting to get a little chillier, having gloves on I would prefer to use the face unlock - but masks always had issues there).

I can't say effectively in words how fun it is to have the gesture to bring down the notification shade again with the fingerprint sensor swipe gesture.

And, well, it's small.  It feels small in my hand.

Speaking of it being in my hand initially, I was surprised they got rid of the squeeze for Assistant feature.  What?  I loved that, and used it a lot!

I really do like the nearly all display, almost nothing bezel feel, and I usually HATE the punchout hole, but I almost totally stopped noticing it after a few moments.  It rarely ever runs into something that's full screen - so I feel silly for hating it.

Navigating around is just fine... the icons don't look too big or too small for its size, which is good.  And the colours of the display look great.  It's not UBER vibrant and wowing, but I don't need to be WOWed by the display.

It has the 90Hz display, but to be honest I'm not sure I really notice the difference.  Is it good because it's just snappy, or is it the refresh rate.  The only time I've seen it where it looks like it's working (and I've forced it into 90Hz refresh rate all the time) is in Pokemon Go.

A lot of the 'features' are really just new Android features - so nothing we've really never seen before, it should be taken by surprise about.

Some of the features I did like were that the main 5 icons in the 'home row' can now be dynamically changed to match app suggestions.

Neat, but that didn't last long for me.

Android also has embrased the 'chat head' feature that Facebook Messenger did all those years ago, except, it tends to only work with Hangouts or Messages (texts).  I guess more developers need to adopt that hook for it, but ... I hope they don't.  Honestly, I found it to be a pain and buggy.  I'd get a chat head and expand and read and reply, but the unread count stayed the same.  Sometimes the expanded window would be blank ... it has some kinks to work out for sure.

As you start to use it, you notice that it does have 'stereo' speakers... somehow, but it doesn't sound like it.  There is some sound from music and game coming out the earpiece, which is hidden behind the glass, but it doesn't do a good job of it. 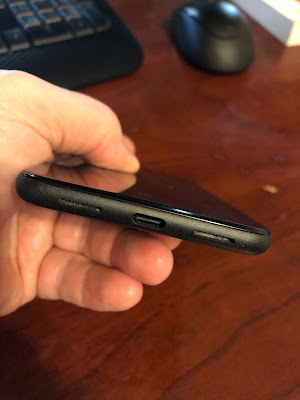 On phone calls, the earpiece is just fine.  But we're not listening to music on our phones for HIGH quality anyways.  Want good sound, grab a good set of earbuds (or these)

The big reason you're going to pick up a Pixel is the camera.  There's something to be said that 5 years ago when they launched the Pixel that they've kept the same sensor (more or less).

What they did this time is backpedal on their "everybody wants telephoto" claim from the 4 line up and took that secondary lens out and put in an ultrawide sensor.

Now, sure, it's not the top dog in the fight these days for the camera, but you have to admit it's no slouch, and the other manufacturers are only just catching up to it.  Yet, it still takes amazing shots without thinking.  I don't have to second guess what mode I'm in, I just point, and shoot.

I've taken some of the night shots before, but one morning I saw Orion's belt clearly in the sky and the shot came out clearly.  I'd never had that happen before.

This year, as they've lowered the level of flagship bells and whistles, they've taken out the Neural Core processor they had that worked specifically on their camera's AI.  Without it, shots are still pretty cool, but without the dedicated brain-power, it has a bit of a blip while it readies the photo for preview.

It's hardly noticeable, just if you were doing a really involved photo, like a Nightshot, or stitch mode, or something similar you may notice a 'processing' when you click on the little preview button.  Only apparent if you do a lot of previewing of every photo, or you're comparing directly to the Pixel 4.

Google has added a couple of Image Stabilizer for video, which are pretty neat:

I have to admit, I am not a big video user, so I thought it was neat, but I never could find a way to really use it.  I guess you have to be a bit of an amateur videographer to really appreciate it.  Glad it's there and not in your face like other OEMs

In the end it's how does it perform overall.  I have to say, aside from the size there's nothing at all I can complain about while using it.  There wasn't glitches, or stutters that were at all noticeable, and remember, I'm a bit of a snob.  It played PUBG, played fine but it was just on a small screen.  Never a hiccup at all.

To top it off that 4080mAh battery shines through (remember when 3000mAh was a huge battery?) - coupled with a non QuadHD display, it absolutely lasts!  It consistently was hitting 30+ hour estimations.

I'd end the day (around 7am until midnight'ish) of my somewhat lightly higher than normal use and it wasn't even at 50%.  Amazeballs.

Neatest of all for that battery, it not only has the Qi charging option, but it can use reverse Qi to charge another device.

That's great as I keep an iPhone for work and I'm constantly charging.  Seeing as the Pixel never gets under 50% after a full day, I can set it to charge the iPhone.

Getting it to do that is a bit of settings and button pushing - you can create an icon in the power tiles.  However, as soon as you plug in the phone it automatically turns on the battery sharing.  That's a freebie feature.

Overall, it just seems to be win win win... admirable performance, killer camera, outstanding battery ... and it's a heck of a lot cheaper than its predecessor.  The only downside is the 'downsize' of it .. sure it's a lower level processor, but if I didn't tell you that, would you notice?  Besides, it has 2 extra GB of RAM to keep you happy.

Sure it's not QuadHD, but only a snob like me can pick up on that.

It's even slightly bigger.  Wouldn't that satisfy me?

This probably could be (and may well yet be) a whole separate article.

There's 2 deal breakers for me on that phone.  First off the 4a 5G doesn't have Qi.  That's an absolute must for me.  I rarely plug mine in to charge anymore and I don't feel like I want to re-set up my nightstand, my office layout etc... to have cables again.

Secondly, it doesn't have IP68.  This is a no-brainer.  In an environment where there's snow and rain... I don't often worry about it, I just never want to have it happen and get caught with my pants down.

A sort of 3rd item is that the 4a5G has 6GB of RAM, just slightly less.  I didn't notice a performance hit between the 2, but extra RAM is always welcome.

For me, the $120 is definitely worth the advantage that the size extra doesn't counter.

So, if you want IP rating and Qi, you grab the 5.  If those don't matter to you, save yourself some cash and get the 4a 5G.

The sad thing is that in the end ... I'm totally satisfied with this device.  I like it, it'll more than likely become my new daily... yet, there's a secret snob tendency in me to wish there was a 5 XL.  One that had QuadHD, had a slightly larger screen and a top of the line Snapdragon 865.  Part of me is still holding out hope that this will be that topsy turvy year where - typically Google releases the flagship and then lets out the 'a' variant; whereas this year they let out the 'flagship' and instead of getting an economy line, we'll be presented with a "pro" version