Re-reviewing the Pixel Buds [18 months in] 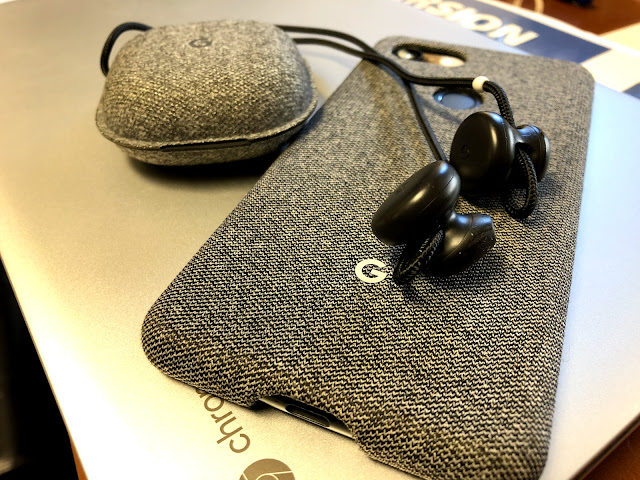 All in all, as I'm starting to spend more time outdoors and walking about, my main set of headphones are my Pixel Buds.  I got these back with my Pixel 2 and I've used them.   I've heavily used them.  I did a review way back when and loved them (albeit a bit of a rocky start).  It's gone through 2 Pixel phones (and man the case matches WAY better to the Pixel 3 cloth style than the Pixel 2's) and seeing as you can still purchase the set on the store I thought it might be time to revisit for all the readers out there.

It was new over a year ago... are they still relevant?

They are pretty pricy still at $219 and with more and more similar 'assistant' type ear buds out there, I was hoping to see they might drop in price at some point.  Not so in this case.  That being said, they are still some of the best buds I've put in my ears over the years.

Why is that?  Well, the sound quality is just so robust.  Sure, big pads over the ears will do better, but against other buds, others just sound tinny.

I also really appreciate the ability to adjust the 'loop' in how it fits into the ear and holds itself there.  It's so simple it's surprising others aren't doing similarly.

I thought for sure over a year that loop would get well used and abused and no longer function, but it's still as 'tight' as it was when I first started to use it.

Speaking about retaining its shape, the 'coil loop' needed to get all the cords back in the case becomes second nature and is very easy.


There must be some slack built up over the time that the bit that I place 'inside' is getting bigger and almost makes it hard to close.  I'll have to follow up in another 18 months.

Another thing over time that lessens would be the battery.  I haven't noticed any issue with it decreasing.  I went on an almost 2 hour bike ride just the other day and I failed to notice the battery read out when I was done, but putting them back in the case and it charged them up again, only lost one of the white dots (so about 33%) of the case's power.

So, physically it's holding up.  The sound is still great, and it is such a treat to be able to just swipe or tap to interact with the controls rather than fiddle with a button.

I have noticed after a while biking that I occasionally have to give the cord on my left a tug as slack builds up on the right.  Minor detail.

Now on to the not-so awesome.

The big seller was supposed to be the Assistant.  I find it actually VERY rare I use it in day to day.  When I have needed to, I've noticed that there's a trick to it, you have to press and hold, have a minor pause, then speak your command fully, minor pause, then let go, else it somehow cuts off a bit at the start or end without those pauses in.

Where I do really WANT to use the Assistant is the playback control.  I'd love to easily be able to tell it to SKIP or NEXT while on a walk and have it work perfectly.

For some reason I've found that it does work just fine for the first couple of times you try it.  But after a little bit, holding down the control doesn't work.  It works... but I get "I'm sorry, I couldn't make that out".  For a long time I thought there was something with the mic or maybe I wasn't holding it long enough.  But nope, if you stop, open up the phone and manually hit skip on the player, then go back to trying to use voice commands it'll work again...

Also, the option to double tap the headphones to bring up the notifications also doesn't seem to work either.  I double tap... nothing.. (well, my music stops), double tap again, nothing.. Best I can figure is that you kinda need to tap it once to 'wake it up' and then double tap (but don't wait too long in between as it'll think it's just a single tap and pause your music, that seems to work instantaneously, and vice versa, if you do that too fast, it'll register as a triple tap which turns it off... which not always works either).

It is highly frustrating.  I've been thinking about resetting it.

And that brings me to another point.  Settings for the device.  It's not exactly clear WHERE to find it on your phone.  You have to go into the Assistant, click on your profile, then go to the 'assistant' tab, and then scroll down to see the devices associated, then see the buds and tap them to see your settings.  And not a lot in there to play with.

I notice that apparently I'm on an outdated firmware version (back in May a new one came out, but I still haven't seen it).  Updating is supposed to be automatic with the Google app, yet I've not noticed that yet.

Finally, the putting them away.  I really suggest you do the triple tap to turn them off before you put them in the case.  If not, I find that putting them away, for some reason doesn't always register to the buds that they're in and charging and I've had it where a few minutes have gone by and I'll faintly hear a notification and it's the buds still connected in the cases making noises.

So if you don't triple tap to turn off, make sur ethat when you put them in the charging spots that before you close the case you'll see the green light come on to show they're starting to charge and disconnected from your phone.

Hiccups described above aside... they are still some amazing quality headsets, and I still highly recommend them, even when they are almost 2 years old.  They're still that good and still that relevant to the market.
accessories audio ear buds Headphones Pixel Buds Review revisit