Okay, I had an initial impressions of the Pixel Buds, and even showed you a few cases (1 & 2) a while back, but after now using them for a few weeks nearly daily, I thought it best to revisit them and give you my up to date feelings.

For $240 you should be fully informed about what you're getting yourself into.

It's pricey for sure, but it's such a hugely convenient accessory that it's pretty well worth it!

First off, I do have to address that it isn't as good as the original Pixel Buds.  Those have AMAZING sound. But what these lack in sound quality it makes up for in convenience.

So, when I say that they don't have as good as sound quality as the originals, they're still good.  Just popping in the originals it's immediately noticeable how much better it is.  But it's good enough that I enjoy and can still pick out separate instruments etc..  Plus with the 'bud style' it really gets down into the ear canal.

Now how it makes up for that is with convenience.  And there are several ways.

The BIGGEST advantage of the new pair is that the case is wirelessly chargeable.  Pop the case on a Qi stand and it charges (now I've had a hard time on angled stands to find the proper Qi sweet spot). 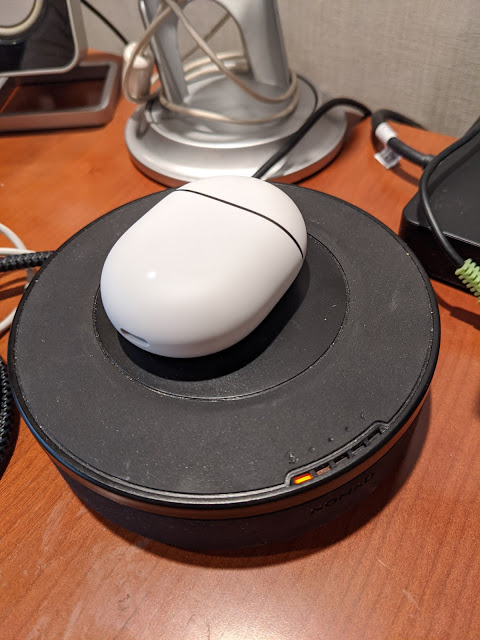 Speaking of no cables there's no worries about the cord twisting or trying to wrap it back in the case. Super nice.

Without the cable to hold them together and preventing it from getting loose and lost these actually do a good job staying in the ear.

With the originals there was the adjustable 'loop' to make sure it fit in, and I was worried the little rubber 'nubs' wouldn't be enough to hold in your ear - but it does.  So well.  I feel way more secure with these than I do with say the FreeBuds which feel like they're just hanging there. 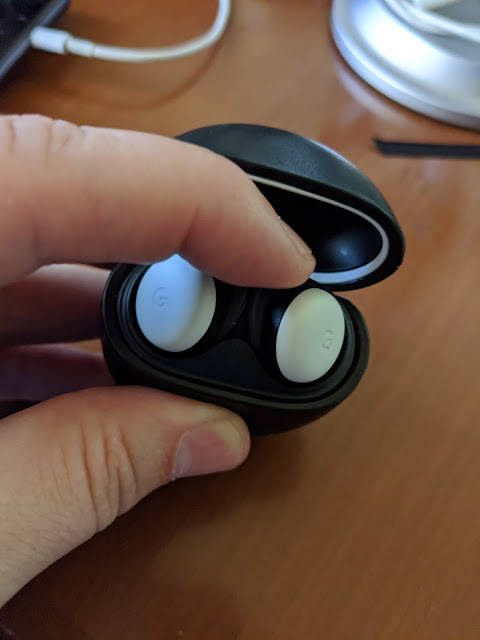 Speaking of the nubs, that seems to be the only piece of the bud in order to pull them out of the case.  A few weeks in and it doesn't show any sign of becoming too loose - but maybe another few months... who knows.

Now the other way it's convenient is that EITHER bud can be used for gestures.  And that's great.  You don't have to remember which is which for which control option.

Tap to play/pause, swipe for volume, double tap for skip and trip for previous.  Now, where it gets a little 'wonky' is the longer press.

While I'll be biking and I'll hear a notification sound, I can long press (about a second) for the unit to start to play the notification it received "it's 4:42 pm ... you have one new notification from ..." etc..

Now, if you long press it a little bit longer that's when the Assistant kicks in. You'll hear a little chime that tells you it's listening... I figure that's what it's telling you.

I do have to admit the Assistant has been a bit of hit or miss with me.  Probably mostly as I'm trying to talk to it while biking... but even still it hasn't been a super pleasant experience like using my phone or my minis.

Getting it to text is a bit of a longer process - would be just as easy to pull my phone out.

Now, I know it's not a failing of the Assistant, but I can't send to FB Messages or WhatsApp as they come in. And some apps it'll read out the message, and others it won't even give it a try.  I guess it depends

In fact, even with text messages, with the original there's an option to reply after you listen to it and I can't seem to figure out how to ... I don't hear any "press to reply" after listening to it.

But that's okay.  I mostly just want to listen to music and listen to what messages may come in.

After a 45 minute bike ride I had lost 21% on one bud and only 8% in the other (odd). So let's assume about 20%.  So it's about 2 minutes per percent, so a pair should last about almost 3 hours before being drained.

After a 2 hour outing it had lost about 75%.  That would mean that it would last maybe nother 40 minutes or so.   Which holds about the almost 3 hour life span.

So it should last a pretty good amount of time... 3 hours at any one stretch and then plug in and charge up.  I haven't measured how long it takes to charge the buds back up, but my math had that after a complete top up, you could recharge the buds about 4-5 times before the case would need to be recharged.  That should give you about 12-15 hours of life.  The website says 24-25... but real world being what it is, this sounds more realistic.

Speaking of the charging, I do love that the 'app'/setting to see actually does allow you to see the capacity of the case.  Not as readily as say the FreeBuds, but definitely better than the 3 dot indicator on the originals.

All in all, I love these and for my daily bike commute they are my go to.  They're small enough to fit anywhere, I honestly forget they're in they're so comfortable, that I only remember when someone starts to talk to me.

I think they're a perfect purchase for anyone on the go.

Now, if you're a big audiophile, I prefer the originals.  These aren't too far behind, but their convenience really outweighs the originals.