Posted by Ryan Moore on August 31, 2019
So, it's only a short few days before I ship the boy back off to school.  Set up the new bus routine etc...

We've got his desk set up and rearranged his room for a new closet and layout ... make it a great place for him to work.  Grade 6 is important.

Well, he's pretty set on his laptop, he still loves his Acer, he was just showing it off the other day (which led to a pretty unfortunate event).

If you're in the mood for a new laptop to help put you in the work efficient mood (back to school and all), maybe this model from HP could be the trick. 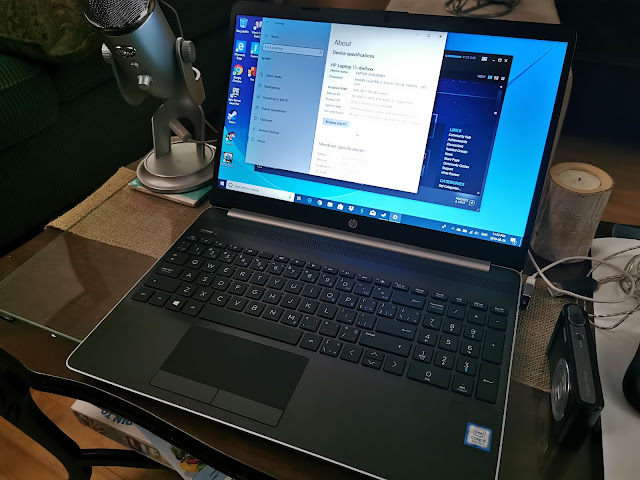 It's no power house, but it's not a slouch either.  Depending on what you're doing back at school, it could be the right middle of the road for you.  Stick around to the end of the review and we'll be giving it away too! So, read through.

I have to admit, I'm still not back up to date with all the meaning of most of the hardware specs on computer hardware these days.  But those are the specs I know I can talk about.

15", it's a big display, with not a heck of a lot of bezel (almost as minimal as the Asus's NanoEdge).

The resolution SEEMS small, when I compare it to a QuadHD display of my tinier cellphone, yet I don't have any issue viewing anything or finding fault with the display.  I do wish it was a touch screen, you do get really spoiled on that front.

Going around the device you can see that it has a bunch of connections. 2 USB-A ports on one side with the  SD slot and the power port. 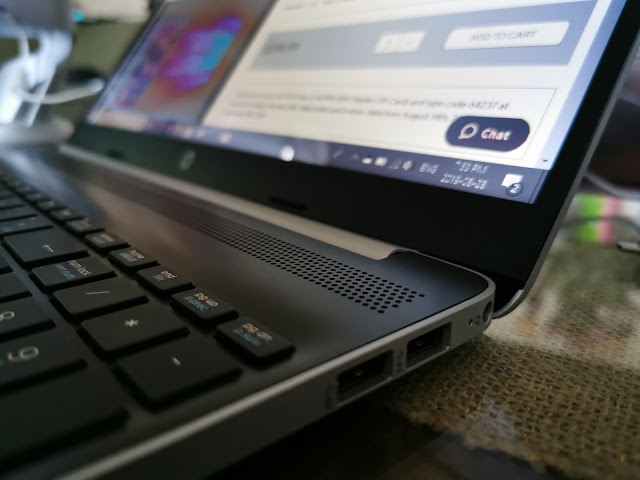 The other side you have an Ethernet port, the HDMI out and a USB-C port (along with the headphone jack). 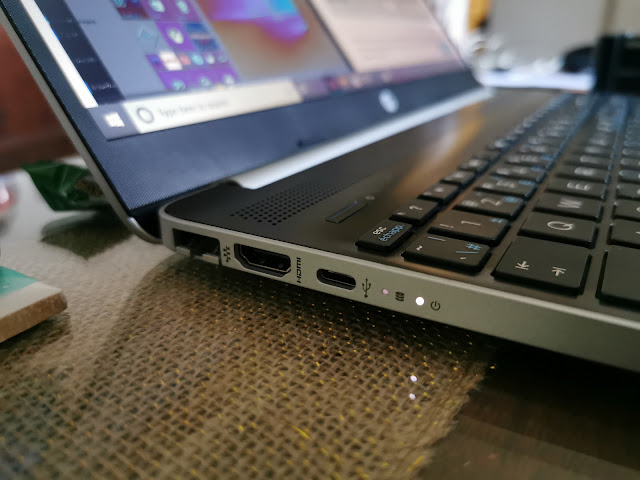 So, it's got enough jacks and whatnots to keep you entertained.

Turning on the device there's a sliver of a button to use (you only have to use it the first time to turn it on, otherwise from sleep you only need to tap any key to wake it up. 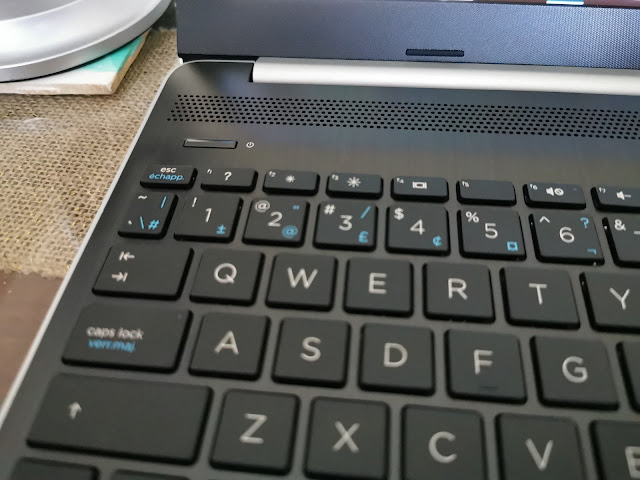 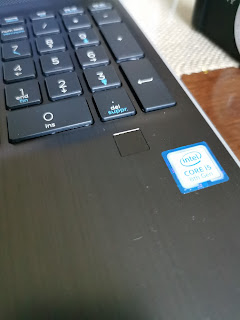 There's also a neat little fingerprint sensor.  Now that's nothing new on some laptops, but definitely something that you'd like to have in this age of heightened security.  Whether it's something you want to be assured of if you leave your laptop in a classroom, or in the office.

It's unfortunate that the sensor doesn't act as a bit of a button, like on our phones.  Just touching the sensor activates it.  It doesn't happen with this.  You have to press a key to wake it up, then tap it to read the fingerprint.

The keyboard is fine, lots of the buttons you like.  The touchpad being a little off-centre throws me off a tad and I have a bit of trouble finding my spot on homerow - the little nubs on the F/J aren't quite as distinctive to me.  (do people still use the 'homerow' typing?).

It is 'off-centre' because there is the number pad on the keyboard as well, and that's handy as you are using it for work.  That's handy.

The extra size really makes it comfy for your wrists to rest on the 'shelf'.

Speaking of the 'shelf' part of the device.  Above the number row is the speaker array.  It's not bad, and some of the windows sounds I did find it pretty 'tinny'.  Now was it that file, or something while it was booting up... because I didn't notice that behaviour with anything else.

But how does it work?

Well, with the i5 processor it's good.  8GB of RAM is decent.

For 90% of what most people would use it for, getting email, watching Youtube or Netflix, it's bang on what you need.

I fired up Fortnite, and it was a little stuttery.  I had to dial back the quality to make it playable.  But that's a top end game.

I brought up Steam and played some of the nice time wasters on there, and no issue.  I really like that Shank 2 game as a bit of a button smasher (oh, and hooking up the Matricom XYBA was super awesome and easy to do) and I had no issues playing that.

The battery, I could wish a little harder that it could last longer.  I would find that based on some usage you could expect about 6 hours before you're plugging it back in.

I also didn't care for the fact that trying to find out how long a battery is expected (really getting spoiled by Android) to last.

So, this isn't a beastmaster 9000 ready to tackle all your biggest and baddest hard tasks.

Viewing emails, editing photos, writing out articles (like this) it's going to be more than enough and doing so on a fairly nice size screen to boot.

Check it out for yourself - you may win this.