Acer Chromebook R11 - the chromebook for my son

Posted by Ryan Moore on February 27, 2018
So, when I got the Pixelbook, I was pretty excited.  I loved it, even a few months later it still has me snared.

While I was using the device, I knew I had to get my son one.  But, he's not ready for a full-blown Pixelbook.  But he needs something.  The phone is heavily used by him, but he's also starting to enter the era where he's got to do a bit of report for homework.  So something he can clack away on the keyboard would be good (his writing is terrible... mind you, not practising it by doing more keyboard work will only worsen it, I get the irony).

I'm terrible at picking out stuff like this as I tend to over-obsess over every detail.  In the end I decided on the Acer Chromebook R11.  It was $350 (can't remember if it was on sale or not) and it had some of the main points I wanted out of it for him:

- it had Google Play to get his Android apps
- it had touchscreen (this was just bonus)
- it had minimum stats of 32GB storage, and then it came with 4GB RAM.

For me, it was a good buy at the price. 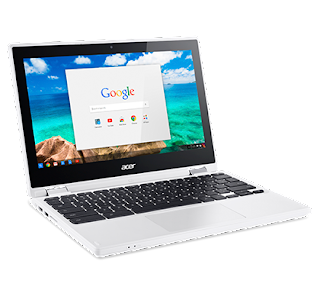 My son loved it.  He unwrapped it and was very ecstatic ... until he found out that as its ChromeOS he can't install Steam; he was really looking forward to finally installing Undertale.

I had the laptop in hand for all of about 5 minutes while I got in and set it up for him and then he took over.

It's interesting to see the younger generation take to this technology instantly.  I got him a mouse in case he wanted it, but rarely uses it.  He prefers to use the trackpad (like me), but more so he touches the screen.

He loves it.  First up let's talk the specs: 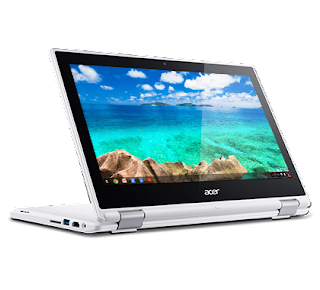 Now, the device has a reversible display, meaning, like the Pixelbook, you can fold the keyboard to the back and either have the device in tablet mode or tent mode.  My son prefers to use it like a laptop.  Using the on-screen keyboard is a little awkward.  (it's hilarious watching him use it in front of someone and then when he wants to, flips the screen around and they go "he just broke his laptop")

The first thing I noticed when I got it was that I really disliked the trackpad.  It felt ... loose.  Almost wobbly.

My son didn't notice or care.  Tapping still worked fine, and it still clicked just fine too.  I've tried giving him a mouse and he just ignores it.

In terms of performance, I've never seen my son comment about any slow speeds or anything. He even installed that car racing Asphalt game, and that is pretty hefty, but he's been good with it.

The tricky thing has been running some of the Android apps out there, whether to run them in 'windows' or in full screen.  The pain (and this isn't Acer's issue) is that if you want to change the view then the app has to restart.

The battery performance again hasn't been an issue with him.  It does feel pretty archaic to have to have a proprietary charger rather than some USB-C or other plugin.  I get it, for this style of battery etc... it needs it's proper supply of juice.

It'll be interesting going forward to see what Google does about bringing Assistant to more Chromebooks and even the option to start to do VM for Linux apps (i.e. then he can get Steam).

All in all, it's been a great purchase for my son.  we found a decent little neoprene carrier for it, and the fact that it is a bit bulkier than I'm used to (remember, I'm used to the ultra-thin Pixelbook) gives me a little more security that it might take some abuse.  It's about 2 months in and I don't see any real wear and tear on it thus far (tho' we do need to remind him to lightly wash of his grubby fingerprints all over it... how do they get so dirty).

I'll have Dean do his own review on this shortly (it's been hard to find time lately where he hasn't had homework or birthday parties, or karate, etc...).  He can talk more specifically about the battery life, the performance etc... but from my point, no complaints from him means he's satisfied, and I can rest assured that because he's using Chrome, he's always getting the latest updates and won't have to worry about niggling little things like software drivers etc...