It was quite the shock and amongst the anger, frustration, there's also a level of embarrassment that I really shudder about sharing with people.

Let me set the stage.

My son got a Google Play gift card, and has quite the amount of credit built up.  We police a fair bit what he buys just so it's not frivolous stuff, but at the same time, it's his card, his gift.

Usually, he's pretty locked down for access as we keep control of his password, so he can't actually buy anything unless we punch it in for him.

This past week he was in a tech kids camp and he really wanted to bring his Chromebook.  That's cool, he loves it, he can show off what he's learned to do on it to those around him (like coding on Cozmo).  Except, he can't turn on his laptop without the Google password.  Hrmm... I can punch it in, and then he can use his PIN, but if it times out or whatever he'll need his password again.

So, I do the thing where I say, "here's your password, be careful".  I think you can tell where this is going.
It's at this time he logs in and starts to realize - "oh, hey, I have a bunch of credit to use up".  Cool.

Because I have him linked to the family account, I get an email whenever he purchases something.

He buys a bunch of stuff.  A bunch of emails come in. Don't pay it much mind about what he's picking up.  I'm secure.  When he runs out of money, he'll have to ask permission to purchase with my credit card that's linked to the account.

Now it comes to Sunday, one of my only quiet days where I can sit down while my son's with his tutor and I can work on some stuff at the office.  Catch up on things.

I notice my credit card is higher than I expect it to be (isn't it always tho'?) and I inspect.

Yeah ... amongst other items, my son has purchased a nearly $400 game. 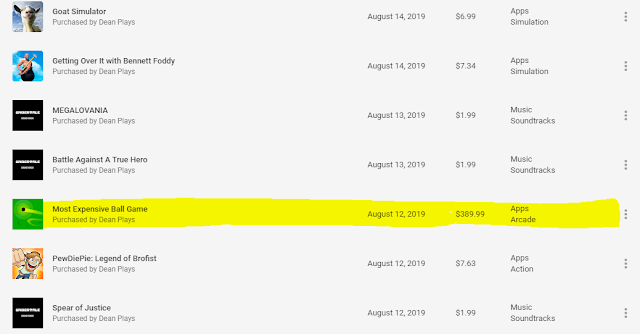 I'm going to be sick.

But... I thought I was safe.  If he had to use my credit card, don't I have to authorize/approve?

Let me dig through the settings:  https://play.google.com/store/account/family

Okay, there's Dean, click him and what does it have for purchase approvals when I click his name: 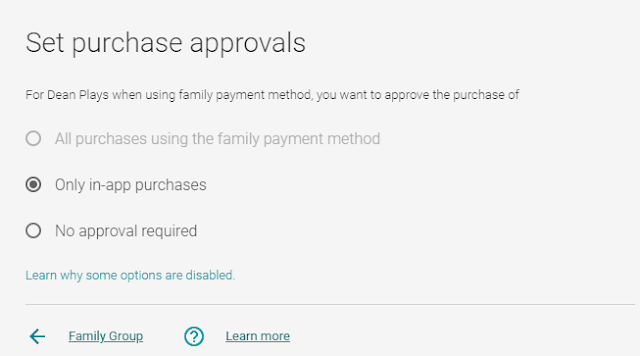 Wait... what?  That tracks, because when he wanted to buy Robux I had to punch in approval.  But 'all purchases' are fair game?

So, technically, yeah, I've convinced Google Dean is 18.  (else he'd lose all Gmail, Hangouts, etc...) and because of that, even as it's a 'supervised account', that family member has free access to your credit card you set up.

Walk through the "supervised account" settings and you can see they're big on making sure the member is safe, track their activity etc... you can definitely prevent them from purchasing items WITHIN a game, but they have free reign to buy anything they want.

That is horse shit.

They can have prevention around spending some money in Pokemon Go to buy more addons for your character, but there's no prevention to buy a $400 game? 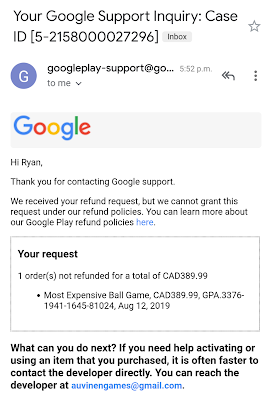 I spend a good amount of time on the phone to find the number:

Where you can go through it and eventually find a link for 'request callback'.

Hrmm...  If I can find the actually number, I'll let you know.

Anyways, Google reiterates that it's beyond the policy, so I'll have to deal with the developer to see if I get a refund that way.

That is just a simple email address on the app's listing.

I call my credit card and ask to open a dispute claim.  But they're saying because Google is following their policy/procedure, there's no dispute option.  Best try your luck with the developer.

Sure, Google and Visa were sympathetic... but not in any way helpful.

I called Google back and they said that to let them know if the developer doesn't get back to me.  They have a policy that all developers should act professionally and they give them 3 business days.

If Jahaa says "too bad so sad", are they going to magically refund me then?

All the while, I really, truly do believe my son was not being malicious, and that it was an honest to god mistake.  So I can't really punish him.

Others may not be so lucky.

So... for the love of god.  Check that settings on your Family Link.  Change the family payment method to some very limited credit card... watch who has access, limit where you can.