Posted by Ryan Moore on May 17, 2021
The weather out there is just CRYING out for me to get outside more.  Whether it's for a good bike ride, walk or even hanging out in the hammock.

If I'm outside I want to be soaking up the sun, but also listening to some tunes, or CBC Radio (even the odd podcast).

Now, when I go for a nice long bike ride, I'm still a big fan of the Pixel Buds (Gen 2), and I'll get to why in the review.  Typically, when I'm lounging I liked the OG Pixel Buds as they had just the BEST audio I've experienced for wireless buds.

That being said, being the best isn't always the best for every scenario, so I like to check out all options. 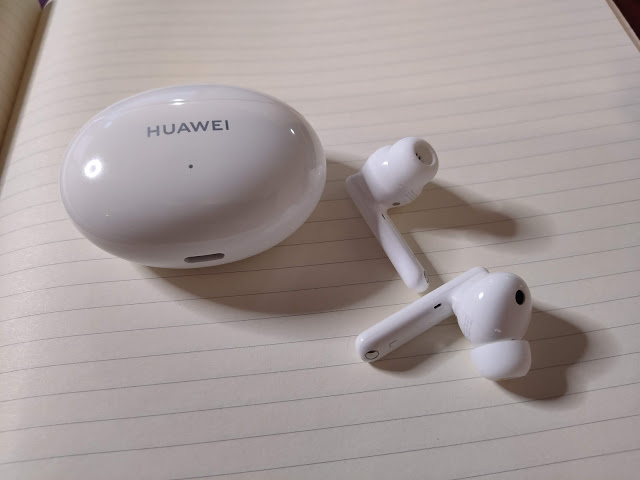 Today's is one that's on the more economical end - the Huawei FreeBuds 4i.  Now, just because I said economical, don't think ... 'cheap'.  It really has surprised me in some ways and definitely something I keep around for sure.

The buds are only $139CAD, which are definitely, far and away less expensive than other earbuds, but then again you can find some for that price range, but they won't have some of the features.

So, they are in a very unassuming small container.  The container is good for about 3 extra charges, and the earbuds themselves are good for a whopping 10 hours of use.

Problem is that the neat little container is just that wee little bit difficult to open up as you see in the video.

Then, once open, the door is very easy to shut closed again.  Aaargh.

Now to get the individual earbuds out, there's just no real easy way to get hold on one and pull it out.

Kind of a pain - and it takes a lot of practice I've found.

But once they're out, they're ready to go... sorta.

Now, you should be able to just use the Huawei AI Life app to add them, however, the app you'll find in the Play Store still isn't updated to include the 4i models yet.

So, your alternative is to download it from the Huawei App Gallery, or directly from the Huawei site.  Even still, you would need to pair them via Bluetooth to your device before the Life app.

So, first things first, once they're out of the case, pair them via Bluetooth to your device (if they're not in pairing mode, put them in the case and hold the side button until the light is blinking).

Using the AI Life app really only adds the extra features of customizing the buttons and making sure the firmware is up to date.  Outside of those 2 things, you probably don't need it at all.

Controls on the FreeBuds are bud dependant.  Unlike the Pixel Buds 2020 - where a tap on either bud is the same, the FreeBuds (as seen in the 3 models) allow one ear to do one thing and the other ear to do another.

Oddly, the controls are only either double tap, or long tap (they even use the wording 'pinch' at one point).  Weird that there's no single or triple tap, the only interface is double tapping.  Hrmm...

Defaultly, if you double-tap your right earbud, that'll either play/pause or answer/hang-up.  Double-tap the left and it'll be skip.

There's no volume control, no option for 'back'.  Remember, these are only $140, so bear with it.

The other control you have is to long press either; doing that alternates between 'normal', 'awareness mode' or 'active noise cancellation'.

Normal - well, I'm sure you know what that means.

Awareness Mode - it's like it drills a hole in the buds allowing sound to come in to your ears.  Too often I have my earbuds in and I can't hear what someone is saying.  Even with the music off, having the buds pressed in, it cuts out a lot of sound.  This way you can hear someone talking to you, or be aware of cars honking etc...

Active Noise Cancellation - okay, this is where it makes itself worth every penny.  I've tried a lot of different earbuds, and none I've tried have done this part well.  This works so well.

In my basement working from home, it gets a little chilly on the toes so I have a small little space heater, nothing major - just a little fan blowing.  With my headphones on I can still hear it if I know what I'm listening to.  Tried the FreeBuds and instantly it was gone.  Could watch my CBC Gem show and in the silent bits, still couldn't hear the heater.

Then I stepped it up and went outside.  It's been nice out, so I hopped in the hammock and started reading.  I could hear lawnmowers going, cars driving... popped in the earbuds and it was nearly silent.

Let's go one further.  Those of you who know me, know that I play bagpipes.  What if I left the device inside, not playing any music, and I put my buds in and just in the ANC mode?  Typically, I use etymotic earplugs while I play.  A nice way to give a bit of a soft mute.

They worked awesomely as earplugs, dulling the din of the pipes so they're not blaring and with the ANC really cutting out the background noise.  A little hard to tune perfectly with them in, but man, what a difference.  Really going to keep them out for my piping from now on (just maybe not for competitions, the white plastic is a dead giveaway).

So, why are they so good at that? 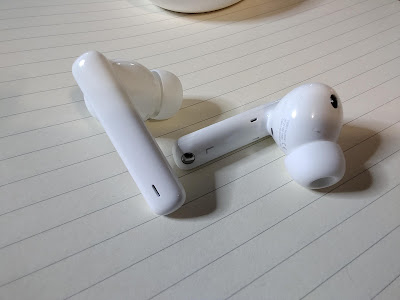 Well, there are 2 different mics on these earbuds, being able to sample a bit of a spatial difference and apply some math to help filter out and pass on only what you should need.

It's really something you have to experience, and tried to find a way to let you experience it.

I wish it had more 'control' options (volume slider, or back/forward), I kinda wish it had wireless charging, and I really wish it was easier to handle getting out of the case.

But, the ability of it to be a good noise cancelling earbuds for under $150, it's worth those other nuisances.  If I want good control options while I bike... the Pixel Buds 2020 are good, because I can't be fussing with my hands to skip.  Relaxing in the hammock, my phone's nearby and I can use my hands easily.

I think if you want to find a nice place to zen out, and enjoy your music quietly, these are an awesome set.

Sure, I've had louder, but I don't think I've had better noise cancelling, and definitely not for this price.