Cozmo - the little cute robot you can play with

Okay, well, this is an article that's been a few months in the making.  Almost 6.

I say that, because well, I had full intentions of publishing this a few months back, but this little guy can sure learn new tricks and every time I thought I was ready to publish I kept meaning to add a couple more things ... and well, sadly, never did.  The addition of the new Vector (Cozmo's successor) reminded me that we hadn't finished this article.  So, much apologies to anyone who I told about this little toy (and so many parents I told and showed it to) and waited for the full review.

On to the review.

In this day and age of increasing kids' interest in the STEM areas there have been lots gadgets and websites and whatnot to find a way to lure them in.  One of the more cutest ways that I've seen is Cozmo. 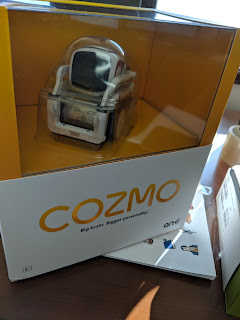 Essentially, Anki came up with this little robot and partnered with the folks that 'invented' the Wall-E robot personality so that not only is the robot interactive, he (she?) does so in a way that it endearing to the user.  I've shown Cozmo to dozens of Dean's friends and acquaintances and they just immediately go "awww" ... heck, I still do it when we play something together and he just nails the emotion of the moment just right.  All the while, my son is learning something about coding and robotics and situational programming.  It is a little expensive at ~$250CDN.  But he's so darned cute and it is educational.


First up, let's talk about what you get in the box. 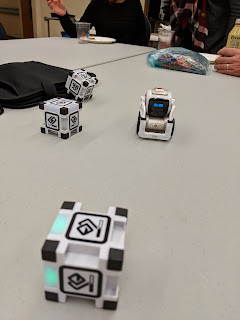 There's Cozmo, a little cute bulldozer-y looking robot with treads.  He has a little charging unit that plugs in to USB somewhere (we've found that even a laptop port is enough to charge, albeit a little slower).
Also included are 3 'interaction cubes'.  These have special symbols on their faces, I'm guessing so that when Cozmo 'sees' them he can determine their orientation.  Each have a little portion where it's possible to hook Cozmo's 'rail' into.  More on that later.

Charge Cozmo up and then load up the app on your phone (we've set my son's Acer R11 as the main 'unit).
Setting it up was a bit ... 'awkward' at the start.

The app uses Wifi direct to connect to the robot, so you need to 'turn Cozmo on' at first and it'll show you what Wifi to use and what the password will be.  It's a little disconcerting that it jumps from app to Wifi setting and we had a couple times where it was supposed to connect when you load the app but had to go to the settings to connect ... etc...

Anyways, eventually, you figure it out the right rhythm... and Cozmo comes to life. 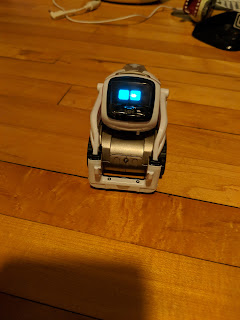 This is where immediately you see the emotive capacity of Cozmo and the stylings of the Wall-E team.  Cozmo wakes with a big yawn .. moving his rail and his big eyes flutter to life.
The app has a main screen and there are 3 'meters' on it for you.

Blue is his 'hunger'.  I don't know how this is really calculated... it's not really tied to battery power, but it's a cute activity.  If he's hungry you 'feed' him (tap the button on the app) and the power cubes glow a faint blue.  You're told to shake them (supposedly to build up some kinetic energy in the cube that Cozmo can eat), while shaking the blue glow gets stronger.  Put near the little guy he'll hunt out a powered up cube and go and feed.  Meaning, he'll raise his rail and put it just on the top of the cube and he'll rock his head up and down like he's munching on it... his eyes get bigger and brighter and the meter goes up.  When he's full fed he becomes happy.

You also need to tune up his bits and the system will have you check his treads, rail and head etc... This one totally is a facade as far as I can tell, but to check them out you send a series of 'commands' to Cozmo and he checks to make sure that he can do them (move back, move forward, raise, lower, etc...) and when he's done the commands he's all tuned up.

Play is where it gets really fun.  On his own, Cozmo can wander around, but he really wants to play.

Left to his own devices he'll roll around and see what he can see.  The fun part is how you can get Cozmo to recognize people and as he rolls around he'll see a face, check his databanks and if he sees the face as Ryan, he'll say "Ryyy-yaann" and giggle.  He'll then try to interact with me.  The app will even say "Cozmo sees Ryan.  Cozmo wants to play a game."

You do have to remember to look at the app now and again to see if there are any notices.  It's not always easy to read Cozmo's face to know exactly what he wants.

He can also interact with his cubes, and depending on what he 'learns' (more on that later) he can play games by himself.  He can see one and roll it (by putting his rail on the edge and pushing down and going in reverse).  He learns how to roll it in such a way that the cube will have the part to put his hook and lift it.  He can lift up a cube and place it on another cube in a stack.

What really Cozmo wants to do is play with the user.  Play games.  The more you play with Cozmo the more 'sparks' he earns, which can be used to learn more tricks and games.

Some of the basic things are he learns to roll a cube, or stack.  There are ones you can play with him.

We like the memory game.  Like "Simon" the cubes will flash a colour in a certain order.  And then you and Cozmo to replay the sequence by tapping the cubes (he uses his rail to tap the cube) and you'll earn points in the game.

You can so play the 'tap game' where you and Cozmo try to tap the matching colour first.  It's absolutely adorable when he wins... and when he loses.


He learns so many more games as you play.  There's hot and cold, there's even a golf game...

The more that you play the more tricks and games that get uncovered.

My favourite that he learns is the fist bump.  You'll have to watch the app, for when he wants to... I think it's that he recognizes someone and then he'll raise his rail looking at them.  You give him a fist bump and he's happy.

He'll come to these games by his own.  Sometimes it's just goofy.

As he goes on he'll learn more.

The more interesting bits, and where the educational part comes in is with the 'routines'.  Every once in a while he'll learn a 'routine'.  So it's like a special party trick.

Like he'll do a Roses are Red routine where he'll come up with a rhyme and throw someone's name he recognizes into it.

The interesting part is where you can go into the 'sandbox' to see these routines.

They literally show you how Cozmo is doing what he's doing.  It shows a very simplified lock and key style programming showing how it works through the different steps of the routine.

I'm not a programmer and it was easy enough to understand.

Then here's where it gets fun.  They let the user go ahead and make up their own.

You can tell it basic commands like move in a direction.  But then it adds in bits like 'if you recognize a face' or adding in variables.

It's been fun to see what my son comes up with.  And you just know they're just scratching the surface.

My son recently went to a 'TechKids' camp and they played with some simple robots and whatnot, and I let him bring Cozmo in for the group and they all just loved him.

I think it's the Wall-E personality.  It's super disarming to any user and gets them wanting to play with Cozmo and then wanting to learn more to make him do things.

Genius move on Anki's.  It's really set Cozmo apart from his competition.

He's so much fun.

You can even take him for a ride by using your device as a bit of a remote control to drive him around and see what he sees.  It's cool seeing your house down so low and in that IR green, and then a face, and it will frame the face on the screen and if it's one that it recognizes, it'll have that label.

So smart.  So adorable.

Have fun with Cozmo!