Posted by Ryan Moore on March 25, 2019
Okay, who still uses a desktop anymore?  Aside from those that might need it for work... but just your day to day computing - a lot of us are using something that's simply mobile.  Whether it's a phone, a tablet or often around the house or out at a coffee shop it's a laptop.

There's a lot of options out there, and we've reviewed a few.  It really depends on what you want to use it for.  Are you a gamer?  Are you a photo/videographer?  Or, for the most, part, just basic web browsing ... if it's simple use, then chances are a Chromebook is all that you would need - and you're off.

Today's option for your computing contemplation the Asus C523 Chromebook, lower end computing device, but big on screen - and runs for just about $350CDN. 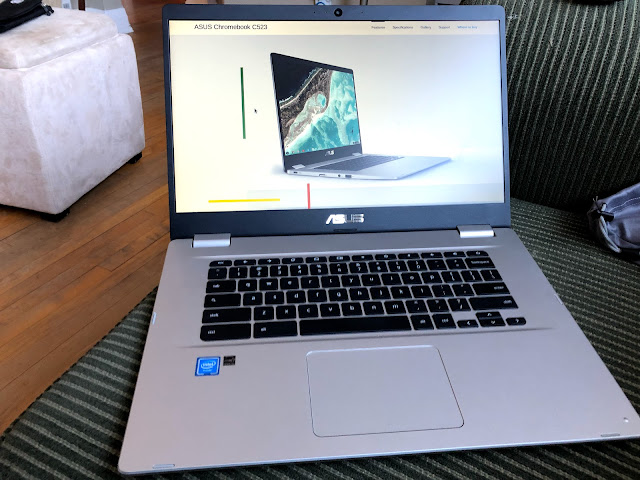 Now, for that lower price, you are not getting flagship level specs, but you're getting a pretty large device.  I just wish it had a touchscreen.


So, let's dive in from that video.

The model I was driving was the C523 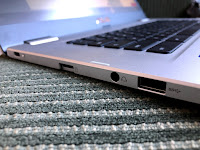 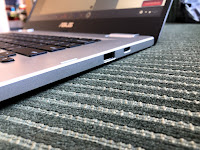 One of the noted missing features I feel it could have had was a touchscreen.  I can't tell you how spoiled I am with the Pixelbook and tablets, that not being able to touch a screen really grinds me.  But for only $350 you put up with some sacrifices.

Also, missing an HDMI cable here is also something obviously Asus struggled with - but to keep it as low profile as it is, it was omitted... plus, I'm guessing that the target audience of this is typically someone who's using it for 'peripheral computing', so plugging it into a screen probably isn't a priority (besides, they could buy this).

On to the device.

First up, it's a pretty minimal profile.  Fairly flat all the way down, no bulge or wedge shaping, so it goes into the messenger bag easily.  Also note, that unlike the Zenbook it didn't come with a sleeve in the box.  Sacrifices for the price!  Not a big worry.

Opening it up you do notice there's no 'divot' to help you get your finger in the opening to pry it apart, so it ends up being 2 hand work, one to hold the thing still as you get one worked into it.  It's not 'hard', just when you get used to something it's hard to not have it.

Okay, so it's open and it's actually a pretty big screen.  15.6" with a pretty minimal bezel on the sides.  The top is a little bigger (it does have the camera) and the bottom is pretty big .. that's a large Asus nameplate. 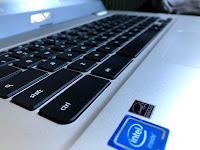 The keyboard is the nice tiny chiclet style, and they're VERY comfortable to type with.  Low profile so it's very easy to glide your fingers around.

The touchpad is very similar to what we've seen a million times before.  1-2-3 touch gestures and a pad that 'clicks' should you want it to. 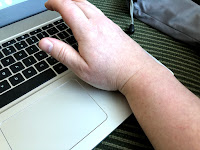 What you really notice looking at it is that because it is such a big screen that the display is way wider than the keyboard, so there's a big area for you to rest your wrists.

And upon viewing it you notice that for software it's pretty much like any other ... nothing new about that.  It's ChromeOS.  It's v72 so if you wanted to put it in the Beta build you could get the Assistant working.

Now, the software is fine... it's not 'snappy' by any stretch of the imagination, but it gets work done.  I'd been using it for my 'remote use' laptop when I work offsite lately and it's fine.  Handling the work webmail and Google Drive as well as browsing and the site work.  Swapping back and forth can be a little laggy.  Not terrible, but again, I'm spoiled.

So, you don't want this to be a device for gaming that's fine (hey, that's what Stadia is for, right?).  For someone like my son, who is needing it for some of his homework - or my parents who need it to check flights and message grandkids on Facebook Messenger.

If that's what you're after, then it's more than enough for you.

For battery life, it's more than adequate.

Right now it's at 51% and 5:29 left... hrmm... that can't be right - guess depends on what you're doing.  This time I've been typing and browsing - there must have been some heavier use with the other milestone measurables.  (fast forward to the end of writing this article and it's now 45% with just under 4hrs left of life)

Anywho, it's going to be a device that you shouldn't have to worry about charging too often.

Bonus about charging!  It's USB-C PD ... and the port is on either side (YAS!!).  Because it is PD, if you have anything less, you'll get that annoying notification about charging source being too low.

The screen is ... well, it's got okay resolution, and it's noticeable (sometimes smaller print you can see some 'blurring', or is it aliasing ... like jankiness).  But the big killer for me is that I feel like I just can't get the angle just right.  It always feels like there's too much glare, or hot white or toned contrast, no matter how you angle it.  (Oh, and speaking of angles, this display can bend to 180°)

I feel like I'm in the optometrist's (ophthalmologist?  someone can correct me) and it's always like: 'better or worse'.

It's fine, it really is, but there's a feeling that if only I adjust it here, or play with the brightness there, raise it up... somehow it'll be perfect.  It's just that 'close'.  Maybe it's just that we're so used to high resolution mobile displays that this isn't comparing to that.  I dunno, but after a week or so, I'm ready to look at something different.  I know my son's had similar, but moreso it was just the viewing angles than brightness.

Now, compare it to something with better display, well not only will it be more expensive, but chances are smaller.  So it's something you'll have to weigh yourself whether it's just 'good enough' for you.

Overall, it's a great price for a decent amount of hardware to get the job done.
Asus C523 Chromebook laptop Review video