Posted by Ryan Moore on December 01, 2018
We've discussed several times the need to sometimes take our online activity away from our phone (which is funny, how it wasn't that long ago we were talking about moving our internet activities from desktop to 'mobile').

Running at about $500 on Newegg, let's see how it stacks up.


What I like about laptops, straight up is that they're definitely sturdier.  And this has that sense that it's not flimsy or flopsy... like a detachable keyboard.

I've found the hinge to be a little 'stiff' (still new?).  Speaking of the hinge, a selling feature is that this can bend all the way to 180 degrees, so you can work with your teammate across the desk. 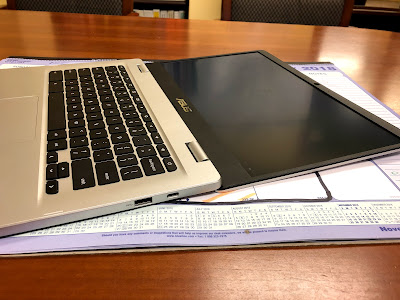 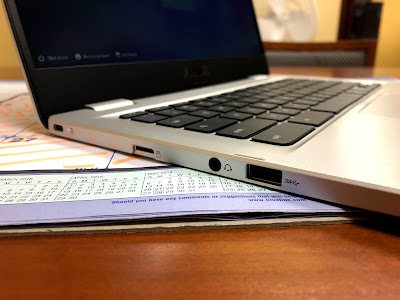 Except that it's not exactly 180 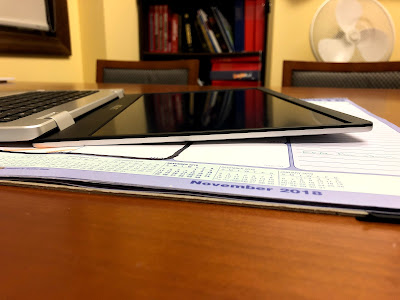 You can see it's not flush on the desk there.

The downside is that this isn't the touchscreen version, so the other person is just 'viewing' and not actually interacting with you on it.

I can't tell you how much I miss a touchscreen interface.  Weird... on the Tab S4 I was saying I want a pointer device and upset that it's all done via the screen.

Anyways, it does have a touchpad, which is responsive, and then the full keyboard... which I found less than responsive, especially the space bar.  I couldn't get through most paragraph writings without some missed space here and there.  Kind of really annoying.  Maybe it needs to be worked in?

Going around the laptop I notice that it has a USB-C port on each side for charging or HDMI out; which is very handy - and even better, if I used a non PD power source, I would get the "low power source charging" notification - but it still would charge.  On the Slate and Pixelbook it felt like it was actually draining the battery.  (note: the adapter has a permanently attached cord... would have wished for something that you could detach)

There's also USB-A on each side and microSD and headphone jack on the left. 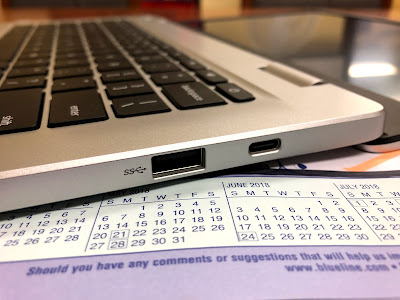 So, you're covered for connections.

Now, using it.  The battery is more than adequate.  I'm not used to Wh as a measurement, but I do know it's less than the Pixelbook ... but even after ~2 hours of movie watching it said it still had about 6 hours of life left.  So, it should be good for a decent day's use.

I have a couple of bigger issues with it in the performance area tho'.

First up, the screen - they tout the non-touch variant as having that matte style to cut down on reflection and glare... which is appreciated, but I found the colours to be a little dull; and I would often have to adjust the angle of the display to make sure I could see the screen right without it looking washedout (low contrast).

Secondly, if you tried to do something more 'intense', like some Android apps or Google Earth on the web - it was pretty sluggish.  It would just crash with PUBG, so don't even try.  Using your typical web apps it would be just fine... no worries.

Overall, that sluggishness and no touchscreen I found it limiting my use cases ... my son's Acer Chromebook had about the same performance WITH the touchscreen for a couple hundred bucks less (mind you, it was a smaller display).

It's a good laptop, just I'd look for the touchscreen option - and how much extra that would cost you - but definitely something I'd probably wait for a good sale on.
Asus C423 Chromebook