Okay, I know you're probably asking - hey, I signed up to read this guy's ANDROID site, what's he doing with a PC laptop?  Well, as much as I love mobile, there is a point when I do have to put it down and continue on work I was doing on my phone onto something 'bigger'.

Sometimes, you just need to be able to type a bit more.

And, sure, I do love my Pixelbook, but there's a level of familiarity with PC.  For me, it's the ability to right click and copy an image URL and past that into a file load piece.  Let alone some games are better run (i.e. Fortnite, which this really became a Fortnite-ing machine).

So, for a while, as a 'blogger', I tend to get a lot of news and media releases about new devices out there.  One that intrigued me was the Asus VivoBook S15. 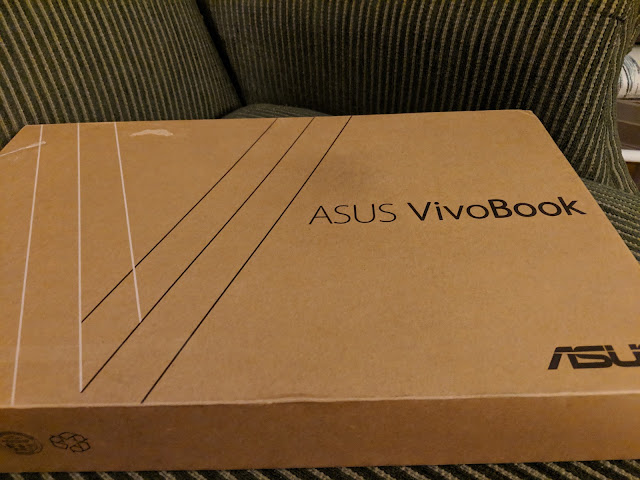 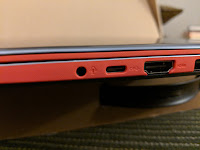 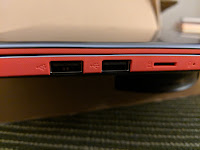 Now, it's been some time since I've really looked at PC specs, so to be honest I'm a little out of it when it comes to knowing if they're the best or are there any better options.  Let's face it, there's always a better option.  But let's just test it. 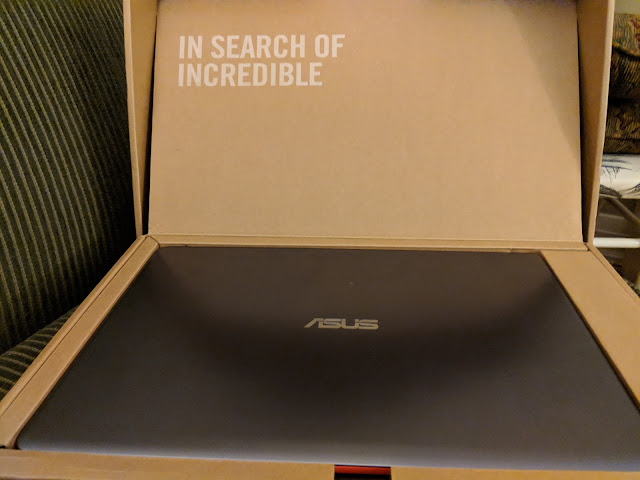 Opening the box gives you some inspiration ... in search of incredible!

So, firstly, the thing to really talk about here with the device is their 'ergolift' hinge. 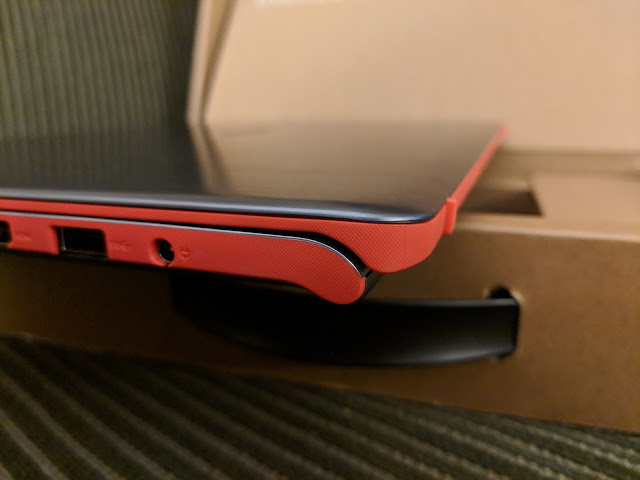 It's got this neat look at the hinge area, and when you open up the display (and let me tell you, it's not the easiest with just one hand... definitely use 2), the display part of the hinge will 'hit the table' and it will rest on the nubs at the bottom, and then starts to push up the keyboard, getting it to rest at a bit of a slight angle. 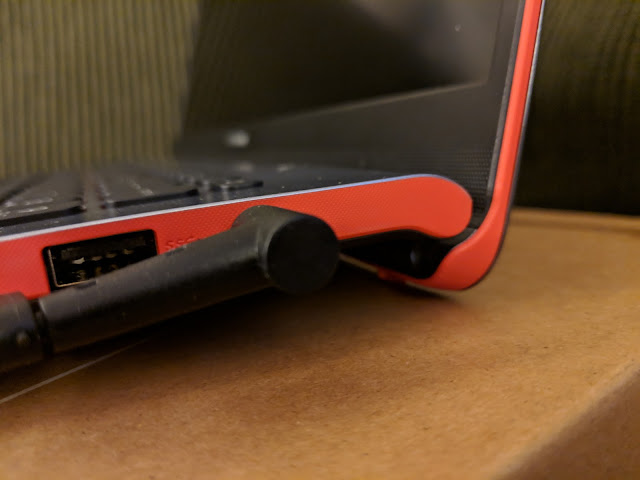 This makes it slightly easier on your wrists for typing.  I assumed that typing might push down the keyboard, thus closing the display, but in order to do that you'd have to press and push down further up the keyboard portion, and that's just not where you're typing.  Plus, even doing that, there's resistance because of the hinge to cause it to close - so you can rest assured.


Next up, the device has what they call their 'nano-display', essentially it means that they have very thin bezels.  It makes the screen look larger than it is.  I'm a little unimpressed by the 1080 display, but it still looks great. 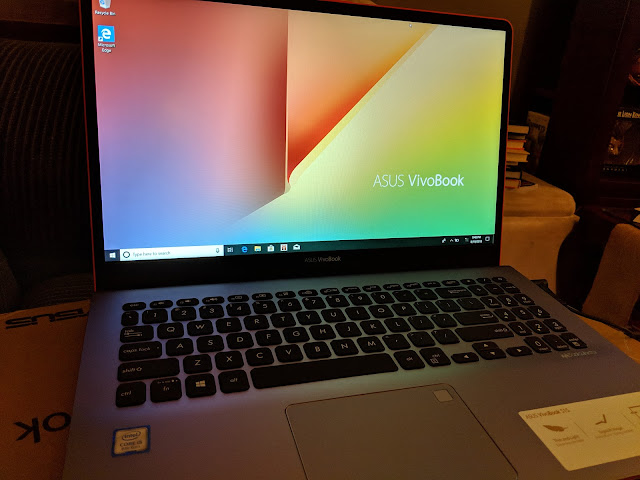 Then there's the keyboard and the touchpad. 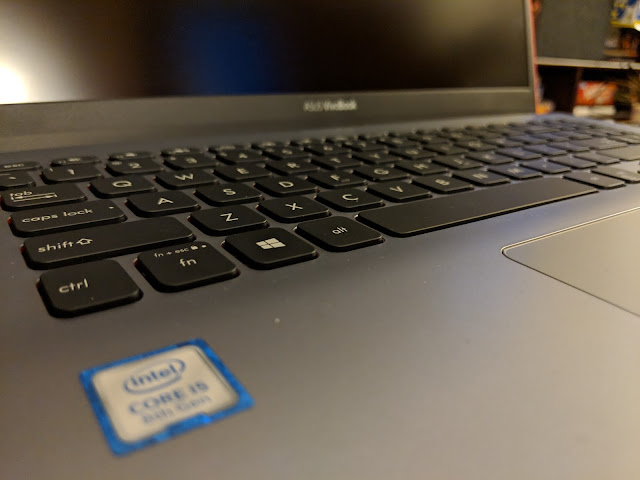 The keyboard is nice and very low profile, so easy to type away.  There's just the slightest indentation on the keys.

Then there's the touchpad. 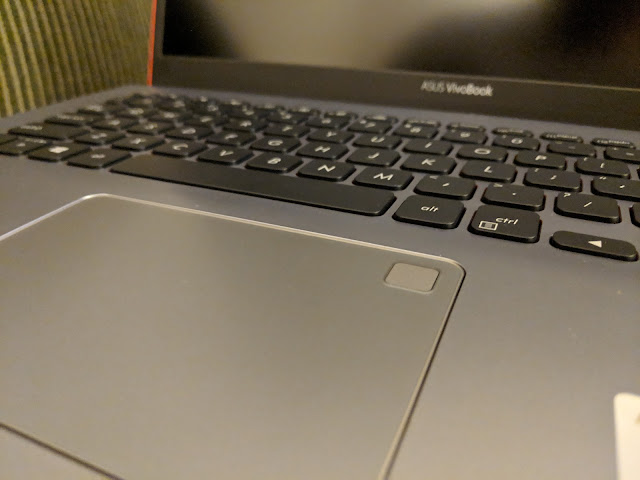 Personally, I find the touchpad just a little 'flimsy'.  Not nearly as bad as my son's Chromebook, where it feels like it's shifting around, but there's just ever so slight a 'give' before it registers a 'press'.  Otherwise, it's very good to be used as a sole pointer input. 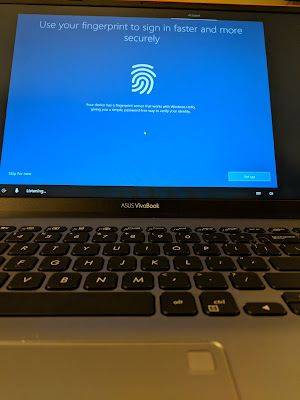 The bigger feature here is the fingerprint sensor.  I love using simple biometrics to log in.

You go through a similar amount of input and setting up as you do on most phones, testing it with angles and doing several dozen taps.

So, you think it'd be a good reader.  I have to say it's about 50% successful.  It's not annoying, just a tap, and it looks like it didn't read and then tap again and it's fine.

Then next time it'll be fine, but then the few times after that it might take 3 times.

What's kind of weird is that if it's 'off' and then I turn it on and hit the power, it boots up.

But, if I close the lid, or just leave it for a while and it goes to sleep ... opening up the lid doesn't bring it back.  Screen is off still... I'm used to the Chromebook where that's the signal to wake it up.  Hitting spacebar doesn't do anything either.  Neither does touching the fingerprint sensor.  Hitting power may be the right thing, but not right away.  So, you're never quite sure what it was that woke it up.

I'm not going to talk much about the Windows features, most of them I don't even look at - and this isn't a review of the OS.  But I do say, I do like the trackpad 3 and 4 finger gestures.  Takes some getting used to, but it's neat. 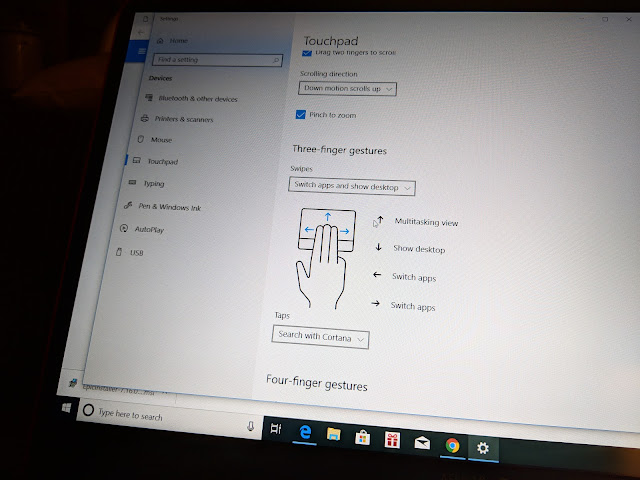 So, let's talk about what really matters.  Specs aside, how does it handle?

One quantitative bit I can speak to is the battery.  I'm not used to hearing the measurements in Wh ... was going to look up what that converts to in mAh or so, but thought it might be easier to discuss how it really lasts.

When I was using it one day for doing simple work ... articles, searching the web, social media ... I used it for approximately 6 hours.  The battery was about 20% left, and it was saying it was about 2 hours left.

Now, start playing some Fortnite and that lessens to just under 2 hours.

And how does it handle operations?

Well, for me, most of what I do is just web based stuff.  Social media, article writing, emails etc...  So, it's Chrome almost all the way.  That is just fine.  It's as fast as my Chromebook ... with all my extensions I didn't notice any stuttering.

Playing something like Fortnite or some of my 'bigger' Steam games - well that is fine too.  Just I had to set the graphics settings to medium.  Setting it anything higher it would start to stutter.

Which I'm sure is fine.  If I wanted a gaming device, I could look at one of the ROG type rigs instead of this.  For anything but gaming, you'll be impressed by its performance.  Its design and ergonomics.  Its display.

The price is a little heavy, compared to something like a Chromebook - but it does so much more.
Asus laptop PC Review Vivobook