Deciding between the Huawei P20 Pro and the Pixel 2 XL 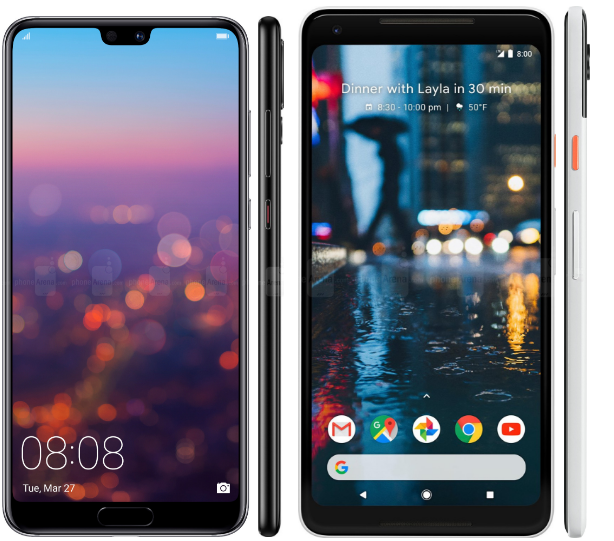 Being one who reviews phones is a blessing and a curse... okay, that sounds way more dramatic than I meant it to be.

Really, all I was meaning to say before I went o a weird place in cliches was that because I get to play with the latest and greatest devices it can sometimes cause me to lose perspective of what's really needed.  Do we really need the upper echelon of everything?

Lately, I've had the opportunity to review the Sony Xperia XZ2, the LG G7, the Huawei P20 Pro ... which is the best?  It's a hard question to answer.  I've had several dozen people over the past months ask me which they should buy.  Not a simple question to provide a simple answer to.

Best I can always do in these cases is talk to something they may know and try to compare.

Up to a couple of weeks ago my daily driver was the Pixel 2 XL, I loved it.  I did a follow up after 2 months and then even tried going back to my previous daily, the LG G6 and tried to compare the 2 phones.

I really liked the Huawei P20 Pro, I had recommended it to about a half dozen people who picked one up and well, I thought it might be time to give it a full shot as my daily and not just the review unit.  So I dove in for a few weeks.  Here are my thoughts on that process.

Now, let's just provide some framing here... both the Pixel 2 XL and the Huawei P20 Pro are really REALLY amazing phones.  It's really tough to compare something that is so subjective.  So keep that in mind here, this is just MY experience and my opinion on comparing these 2.  So, let's not get our knickers in a twist over something I may say that doesn't line up with your world-view.

Anyways - how I thought I'd frame this is to just talk about the pros and cons I'd found on using each. And I say 'con', but really it's more of a 'something I miss that the other phone had that I got used to and isn't here' and isn't a 'con' per se.

First up, let's talk about the Huawei... I had been on the Pixel 2 XL for a while, so what did I notice on second glance (again, I'd suggest going and reading the review I made on it.


The bulk of this centres around the software 'feel'.  EMUI feels ... 'old school'.


So those are my thoughts when I compare the two.  You can see that the Pixel 2 XL has less 'cons'.  In the end the main bit that I didn't mention (but I mentioned in the video... you did watch the video right?) was the fact that I have the Pixel Buds, and the Pixelbook.  Those work so well together that it's seemless.  I feel very 'Apple'ish saying that, but it's true.