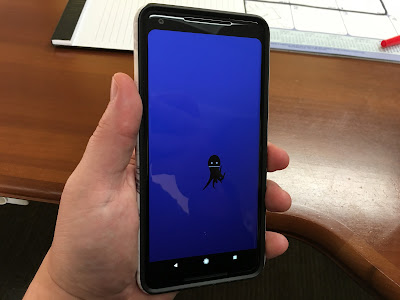 Anyhow, it's been some time since I've shared my feelings on the device with you.

I loved the phone the moment I took it out of the box.  I was enamoured by the quality of the photos.

Let's discuss:
So, first, let's talk about some of the FUD that people had brought up originally.  There was concerns over poor display with blue shifting and burn in...

Well, since the article, Google had released some updates, and one of them caused the navigation buttons to go 'grey' instead of bright white when on high contrast screens.  This is to help reduce the potential for burn-in.  Personally, I still don't see any issue of burn-in.  Even when I go hunting for it (specifically trying to set up conditions where it might be visible) ... I can't notice it.

The downside to having the case on is it's big.  Like, I get used to it, but then now and again I'll pick up my LG G6 and that thing feels small, but it's the perfect size for me.  Then go back to this thing, even when I take the case off (which I do every couple days to clean the lint and whatnot from the corners) it's still big for me.  Not too big, just big.

That camera... it's still pretty amazing.  But it's no longer surprising.  Using at as a daily photo taking device it isn't as wowing in every situation.  That being said, I've been a little underwhelmed as most my photos are in lower light.  It's still taking great shots considering the scenario, but I guess my expectations were raised too high early on.  Still, there hasn't been a shot that I was upset with (that wasn't an accident).

I do have to say the addition of the AR stickers is pretty fun.  The double hit of the power button to bring it up is handy (not as easy twisting on a Moto).

Performance.  I have not noticed normally any sluggishness or whatnot.  Sure, if I just gave it a bunch of duties to perform or it's doing updates, it'll get pretty a little slow, but it's expected.  I haven't had any unexpected slowness from it at all.

Now, again as a frame of reference, I'll pull up my LG G6 and even while it's finishing loading up apps it's blazing fast.  Is the Pixel 2 slow?  No, but there's still a difference.

Overall, I'm still so very impressed with the device.  My only downside I can point to about it is that it's got the new charging standard of PD.  I've got so many QuickCharge adapters around that aren't compatible, so it'll only deliver the slower charging.  It's fine and all.  But when you're used to QC3.0, everything else is just slow.  I just haven't gotten around to bringing out the charger from the box because I have chargers everywhere.  I also wish it had Qi.

Still a recommended device, and despite how I always compare it to my G6, I still haven't put the G6 back into daily use.
follow up Google Phone Pixel 2 XL Review