Remember the Punkt. Phone - you can get Signal on it now as Pigeon

I get the bit of a nod to wanting to return to a Simple Phone.  Our smart phones, especially the top end flag ships are just becoming ungodly expensive and way more 'computer' than most of us need.

There are a certain select few who bend the needle all the other way to look at something pared down like the Punkt. MP02.

Another facet that Punkt wanted to give off was the idea of not only 'simple', but secure.  And today they announce that you can get the secure messaging app Signal on their phones on an app they call Pigeon, which is a stripped down version of Signal. 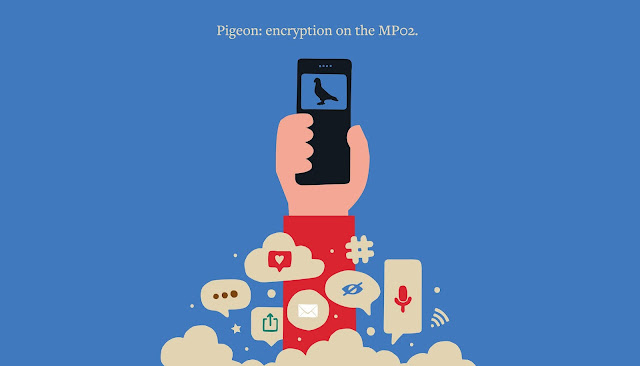 I know, sounds a little odd with the phone that's not going to have apps, have an app... well, I can see it as more and more people are eschewing texting for some messaging system, and if they want to have security, they chose Signal - but it needs to fit on this phone, so they customize it to Pigeon (which reminds me eerily of Pidgin).

Punkt. announces Pigeon: a new encryption feature on the MP02 mobile phone which is compatible with the Signal communication system

Aside from encryption, free-Internet based calls and texts, group messages and voice dictation all bring feature upgrades for the MP02 designed by Jasper Morrison.The MP02 has become the first voicephone to be compatible with the Signal encryption protocol. Signal provides free Internet-based calls and texts worldwide via Wi-Fi or phone data allowance (subject to data charges), with significantly greater security compared to Facebook’s WhatsApp.
Since its recent high-profile recommendation on Twitter from Elon Musk on (“Use Signal”), retweeted by Twitter CEO Jack Dorsey, Signal has experienced a massive surge in interest (and subscribers). It is most commonly used via a free app that is available for most smartphones, tablets, laptops and desktop computers. Punkt. customers can now also connect with the tens of millions of Signal users by installing Pigeon on the MP02.
At a time when increasing numbers of people are assessing their relationship with tech, Punkt. releases Pigeon for the MP02 free of charge, giving access to the Signal network.

Pigeon is based on a stripped-down version of the Signal app, that matches the phone’s minimalist approach to communication. The included features are:

All communication sent via Pigeon and Signal is end-to-end encrypted.
Aside from encryption, the addition of free Internet-based calls and messages, plus group messaging, also constitute significant (and oft requested) feature upgrades for the MP02.