Our Roomba is now 2 months old! Tips we've learned along the way 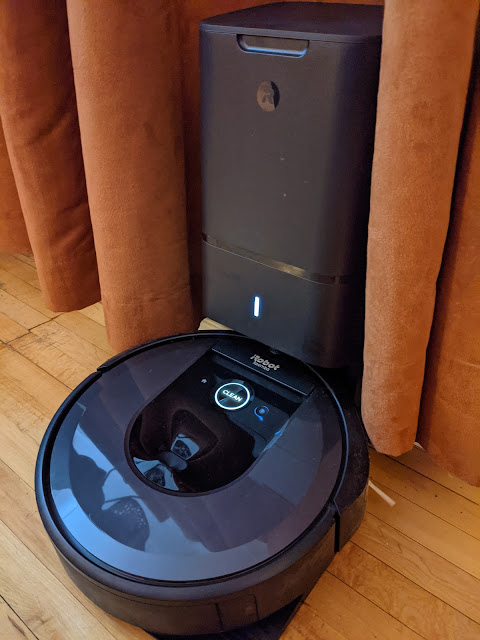 So a little over 2 months ago we brought our little Spot online to our home and the happy little Roomba has been spending some quality time getting to know our floors and mapping out the house.

2 months in with using this helpful robotic cleaner has really been an awesome and fun experience of learning how a bit of mapping technology works with the bonus of us having cleaner floors!!

In that time, here's what we've learned so far to enjoy the experience (and this takes in to account that you'd have done all the proper set up and letting it map out your floors)

As much as Spot learns pretty much most of my nooks and crannies of the floor plan, it doesn't know when you need that cleaning.  I mean I think it probably could guess, but it doesn't want to impose its schedule on you.

So, you get to tell it when to start and do work, but who remembers EVERY day to do something.  Thank goodness the app is pretty feature filled.

It's a good idea to set up a routine.

Think of what areas are you high traffic areas and just tell it to do those areas daily (or every other day) and then what areas are lower traffic and have it clean less frequently.

Suggestion - maybe don't do it at night when you're sleeping - especially if you sleep on the same floor.  Hearing it knock around and empty its container.

But who will police the police.

Sure, the i7+ has a Clean Base that it automagically empties itself into once it's completed its task, but that doesn't mean all is perfect.

Now the dust bin itself should be emptied periodically by changing the bag in there.  It's been 2 months and we haven't had to yet (we are a smaller house mind you).  But there are other cleanings that needs to happen with Spot.  It's putting itself in dirts way for my convenience so I should spend a few moments to make sure it's in tip top shape.

First off, I notice that often the dust container on the Roomba itself still has some dust rolling around in it, so I just make sure to remove it and dump it out.  If it gets really bad you can give it a bit of a wipe with a damp cloth (just remove the filter first and let it entirely dry before you put it back in).

I also have to check the Edge Sweeping brush and make sure there isn't some hair/string all tangled up in it.

Same with the Rubber Brushes. 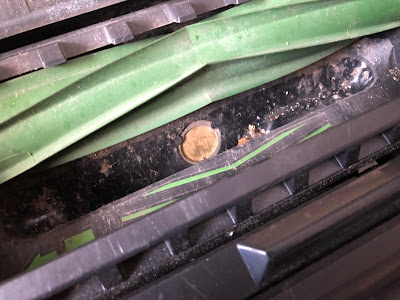 You can pop them out and check the rollers for any debris that gets in there. 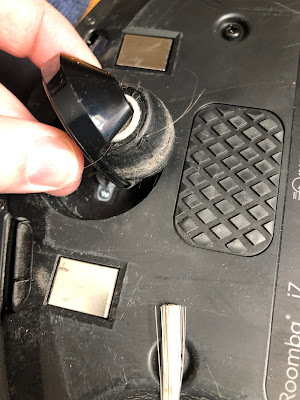 Even the front caster can be popped out and check the wheel hub for any debris.  Getting it out is a bit of a trick, needs a little more force than you think, but it'll pop out and then get rid of any debris before it becomes a bigger issue.

See, my wife does a lot of crafts so there's usually thread around.

Plus, give the thing a wipe down now and again.  It's surprising how much dust and scrapes it picks up.  Couches you think it can't get under, it does and picks up dust all around it all the time.

Couches IT thinks it can go under, but can't it will try and get stuck. 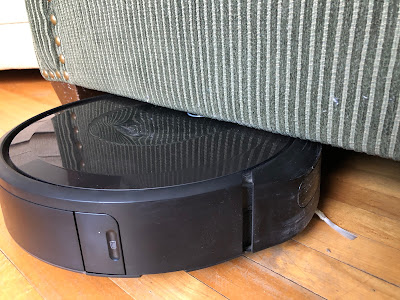 It loves this one corner of the couch, I should just put a couple more of those soft pads under the feet to raise it up an inch or so and let it roam.

Not even 2 months and it's got its fair share of scrapes and bruises. 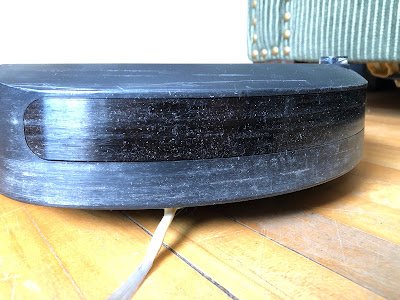 Nobody's perfect.  It doesn't learn every inch of your room perfectly, there's bound to be some minute error in adjustments, so it may bonk into things here and there.  It gets better and isn't just as ramming into things it slowly learns the best route around.

That being said it's always trying to improve itself, and things in your house may not be exactly the same today as it was yesterday.

Sometimes it looks like its lost, but it's probably just doing a thorough job.

Other times it looks like it's having a real tough time finding the base, but maybe a curtain's in the way, or some other obstacle. It'll get there eventually.

And don't sweat the small noisy things.  It's somewhat disconcerting to hear it go over a floor vent or a floor guard to another room and it sounds like something bad happened... it didn't, just let it do its job.  If something bad does happen, the app'll let you know.

Small as the Roomba might be, it can punch into things with a bit of force, and any bit of force might move a smaller item.  We have this little end table that if luck has it, Spot can just fit in between the legs of it... but chances are will bump it slightly once its under, which moves the table slightly and then Spot has some trouble going back as it doesn't realize that it may have moved.  It can be a little funny to watch it bounce around in there.

There's another hall table that is small enough that slowly but surely as it taps it and learns not to go any further... that over 2 months it's moved it a few inches.

No harm to the table, but any small doodads and knickknacks on top - they might roll around.

So, mind anything you have on top that may roll or be bounced off.  The furniture can't be hurt, but a wobbly lamp...

After a hard days' cleaning, the Roomba will find its home (sometimes taking a little longer than you may think, but hey, it's still a baby) and set it self up for charging.

Do yourself a favour and just check the app when you get the notification of a job well done.  Note the status of the robot and charging.  Especially of late we've noticed that it's done some little minor adjustments on the ramp, even backing right off to go back up and seat itself properly.

But, I say to check as one day it didn't do its normal cleaning routine because it didn't seat properly and slowly drained it's battery.

If you notice issues like this check tip #2 and clean those contacts - both on the Roomba and on the base.

♬ Bad To The Bone - George Thorogood & The Destroyers

Love having this little member of our cleaning family.  Every day it does its job of cleaning, and it's a nice reminder to all of us we need to clean too (every day at about 725 I'm running around making sure I've picked up things to not obstruct Spot, and gets to me to just keep things tidy).

Roombas have made an interesting change to the landscape of household cleaning.

The Debaters once held a debate on vacuum vs. broom... and they really missed the true point that a robotic vacuum is really the best.