Our Roomba - Spot - goes out for its first run 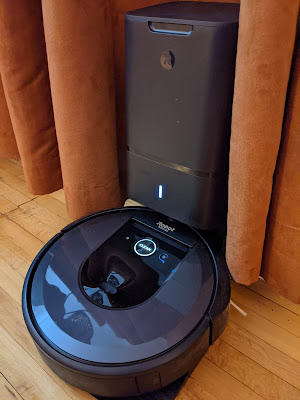 So, we had cleared out the Christmas tree, and plugged the Clean Base of the Roomba i7+ and put the cleaning drone into the base.  It lit up and started to make a tone.

I walked through the set up of the iRobot Home for our new cleaning pal; it was very easy - first creating an account then it needed to find the Roomba, and it asked us for a name.  I had planned on Dirty McDirtface, but that would have been too long to call out to the Google Assistant, so we stuck with Spot.  In the app it even says Spot's birthday.

Then we connected Spot to the internet, and the set up was so cute with a little android-y, Wall-e looking droid walking you through the steps.

It also needed a firmware update at one point, and it was going to take about 12 minutes.

Not long, and while it did it it showed you things about the cleaner you'd need to know, like how to replace the cleaning pieces.  While it did this, I set up in the Google Home app to connect iRobot Home with Google Home.

From the Google Home app I logged in and it picked up Spot right away and asked me for which room it was in.

Even neater, was that now it was in the Google Home app - you could set it up as a panel in the Power menu Home controls.  Nice, even easier.

Once update was done, the iRobot app was ready to go and so was Spot.  Well, it had about a half battery charge, but I was eager to set it out on its cleaning journey.

What I should have done was send it on a mapping run to get a lay of the land.  You can do that if you click the 'map' icon there and it would show nothing at the beginning, but there would have been an option for a training run. 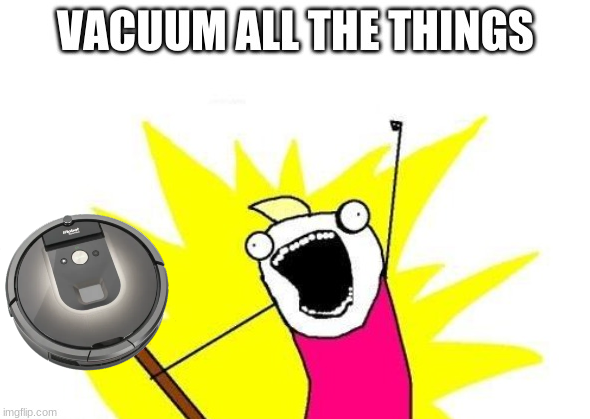 And off it went on its merry way around our main floor of the house.  It was entrancing actually to watch as it figured out how to get around the coffee table, would try to get under the couch, not fit, try again, then back up, move over and try again...

We just liked watching it and following it around, or sitting on the couch, getting ready to lift our feet!

It wasn't to be a good run, unfortunately.  We had a carpet issue.  In the winter time we put down some area rug to catch the wet boots and salt, and a little corner was upturned just ever so slightly that when it would hit it it had some issues getting over it and pulling up the rug. 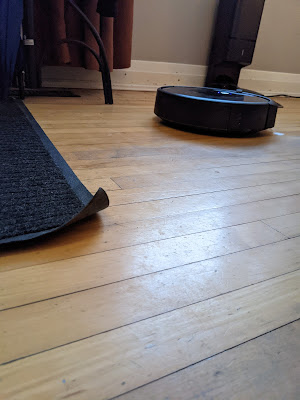 I'm sure it would have been fine over time, but it was easy for us to just say 'go home' and while it did that we moved the carpet around so the curl was in another area unreachable by Spot.

Now, getting spot to home should have been easy for it.  It hadn't travelled too far, but it did take a while for it to hone in on the Clean Base to dock for its Automatic Dirt Disposal.


It probably wasn't too long that it was struggling, but like watching a kid trying to walk for the first time, you kept wanting to get in and nudge it (especially as it kept turning all the way around) - I wonder if the hangup on the curl of the mat had any issue.  But I let it be.

Eventually, it found the Clean Base, and it was neat to notice when it actually recognized where it was as the vacuum stops sucking it's just the whir of the Edge-Sweeping Brush spinning as it homes in on the ramp.

Then it empties itself as the contents of Spot are sucked out.


Now, Spot had been pretty quiet.  Sure, there's a small motor sound, and a small suction sound, but when it docks with the Clean Base, it needs to suck all of the cleaning contents from Spot into its AllergenLock bag, so it roars up it's motor.

Loud by comparison, only just slightly louder than our normal vacuum, and it lasts maybe a few seconds.

I let it do another run after we moved the mat and it went on a couple more after charging after that one.  Again, it's pretty mesmerizing watching it do its thing.  It was interesting to note that it recognized that when the battery got too low, it returned to home and kept that idea of cleaning everything and would get back to it once it was charged up.  Apparently a charge should last about 75 minutes of cleaning.

My first impressions are this after about 24 hours of it.

First, really do pick up any of the big bits... it found several things we hadn't even noticed and they were either tangled into the Edge Sweeper or you'll find just sitting in the base after its done.  The funny anecdote we had for our son was that as it went in his room, and under his hanging closet, I noticed it had some issue, I just thought it was too low for it, but eventually it manoeuvred around and slowly pushed out a stuffy he thought he had lost.

Secondly, really send it out on some training runs to map out your house - otherwise cleaning can take a long time.  Using something called the vSLAM navigation it learns the layout of the house and finely tunes that knowledge every time it goes out.

They recommend you run it now and again in light and in dark, so that it gets an even better picture of the house from different lighting.

It was interesting as it went out a few times that it got better and better at navigating the coffee table, figuring out how to get around the couch and hope chest into the hallway.  Even docking became faster and faster.

Also, it makes the map a lot faster, and then you can get into the map and give your map a name ("main floor") and it'll recognize your rooms and you can set up 'zones'.

It was pretty satisfying that it took only a day for it to 'finish learning' our floor (now, we do have a pretty small house), but then naming the rooms and picking a zone.  This is good so that once you have it done, you can set up a schedule for specific areas, or even just for giving the Assistant a command to send Spot out for a cleaning of just the foyer.

I was also impressed that it could go over a bit of the lip of our hallway to the bathroom or kitchen. 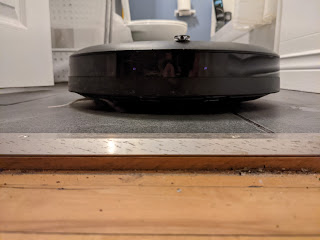 But, like an all-terrain vehicle it muscles up over no problem.

Once it's done its run, go and flip Spot over and check the Edge Sweep and the rollers, in case there's anything caught.  It had found some threads and they were tangled all up in there and some label/plastic strip had wound its way around the rollers.  As well, a piece of cardboard was just sitting in the shelf where the Clean Base sucks up the canister.

Overall, we are enjoying watching our little Spot get smarter and smarter and look forward to how we incorporate it into the cleaning rituals of our home.  I'll have a full review up over the next couple weeks or so.

I do have to admit, I like the notification on my phone saying how it just 'emptied itself and saved me a trip to the trashcan'.  Oh, Spot, you're so thoughtful.