HP Chromebook x360 - a tiny tank of a laptop

Working from home, it looks like we'll all be doing more of it for the next while - c'mon vaccines - so having some decent machine for our home office, or online schools is going to be important.  And there are plenty of options to choose.

Those that know me know that I choose ChromeOS for my mobile workstations (unless I'm made to use my office Windows laptop).  I feel that they have all the tools and chops to be able to compete with some of the... well, not the big dogs.  Some of the PC Master Race folks (are we still allowed to use that phrase?) will always argue that their 32GBRAM/4K monitor, i9 processor yadda yadda will never be beat.  Sure.

But for most of us, we need to log into our web email, we need to work on our cloud based software, email sheets, etc... there's not a lot of heavy processing going into our daily life that needs a true TANK of a device. 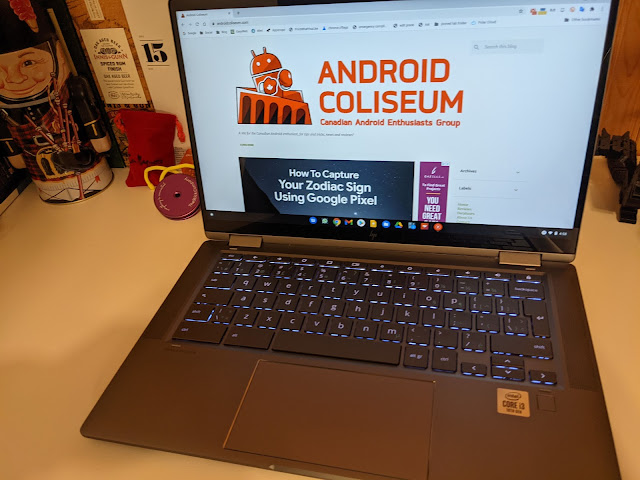 It's a tiny little 14" display, yet has some real heft to it; physically and a figuratively.Here's what the specs are for this $800CDN device:

The last feature is what really stands out to me.  It definitely has the initial impression of feeling much denser than you think it is. 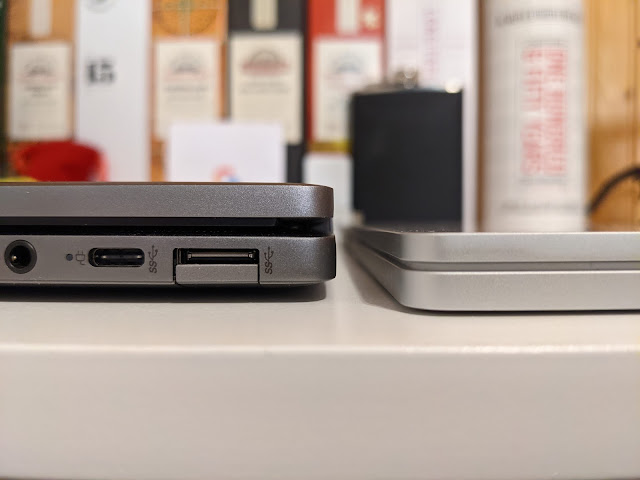 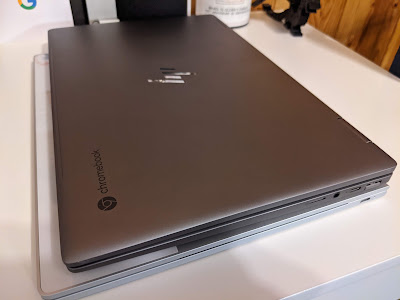 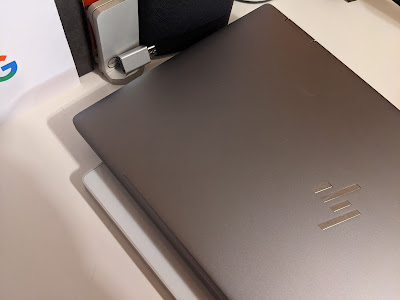 Compared to my Pixelbook it's a lot shorter (taller?) but only a smidge wider and has the real feeling of being tiny, yet it's got some heft to it when you pick it up.

Not so much 'heavy' but a feeling of secureness that it's going to be able to stand up for a long time to what you throw at it (not that I do anything but baby my devices).

Having that standard of MIL-STD-810G that really gives me some more confidence.

The other stat that sticks out to me is the i3 processor. 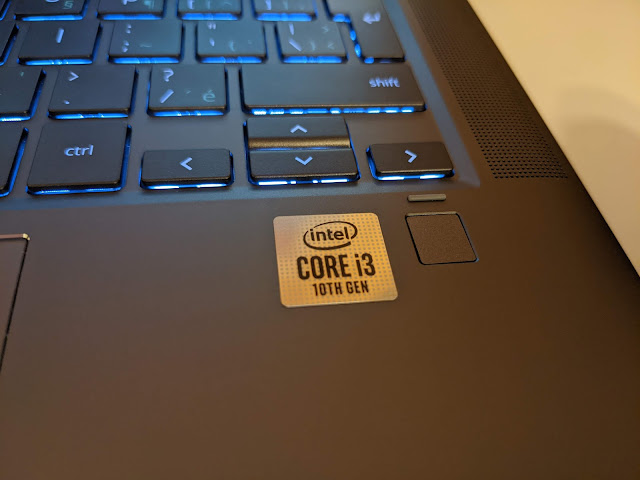 I'm a bit of a snob I'm finding out as I'm used to i5 at a minimum, so I was concerned that something less might be really noticeable (like the MT chip on the Duet).  Spoiler - didn't notice a beat of a difference.  But more on that later.

The other spec was that battery.  I'm still not used to understanding Wh - where I've been a mAh spec for the past decade and more... so I rely on their 'estimated' and them saying 13.75hrs is a big claim.

Okay, enough of the spec potential, let's dive in and see what it feels like.

Like I said small, but the sense it packs a big punch.

Looking around it's got a full HDMI port on it, it's got dual USB-C ports (one on each side so it's easier to charge), an SD slot, a headphone jack (on what feels like the wrong side), and then a neat little 'latch' style for the USB-A slot.  It looks too small, but there's a little 'jaw' that hinges open to let it in.  It's neat.  I don't know why it's needed, but it is there, and it's kinda cool.

Flip up the lid and you're met with a neat light up keyboard and upward firing speakers (ah, that's why it's a little wider) and the speakers are nice.

Not super loud, but definitely usable, where some others are tinny and quiet.

Neatest of all is that it also has a fingerprint sensor.  Just tap and you're in.  Albeit, keep in mind that that only works if you had already logged in with the password.  A fresh boot up or coming out of a deep sleep it'll need the password, not just your finger.  Still, it's a handy time saver, even when I'm using external keyboard mouse etc, just reach up tap and good to go.

Before I get further in, as I'm loading things up, there's one thing I noticed.  Now, it's really noticeable while it's in that start up - before you really load anything up or start typing away like crazy on your work ... while things are silent.  The laptop isn't.  Sure, on a previous laptop I said there was a bit of a loud 'whoosh' of the fan that happens now and again.  This is a softer 'whirr' sound, but not only that, there's a 'plinkety' sound as well when the fan is slowing down, I'm guessing on some gearspring or something.

yeah, of course, trying to capture the sound was way harder... but I hope you hear it
It's just one of those sounds that once I heard it, I couldn't un-hear it and had to just start watching youtube to drown it out.

It's not loud, just something for my ADD'ish brain that picks it up constantly and drives me to distraction... okay, I'm being a little melodramatic.

Firing up the laptop you're met with a fairly large screen to body ratio with its super tiny bezels around it.  But more than that the quality of the picture is really good with the right amount of contrast and brightness.  I did find that there was a hint of a warm tinge to it even at the top end brightness.  I wish ChromeOS would start to add some video adjustments (like adjusting the temp of the picture), but it's really just fine as is; I'm just starting to get picky now.

It's typical ChromeOS with all the Googley goodness, meaning you log in and all your Chrome bookmarks and Chrome apps from other devices come over automatically.  Logging into any of your Google items like Drive are super easy to get to.  And, you have access to all the Play Store as well.

It's simplicity is just so welcomed when I compare it to my office Windows laptop and all the start up items and apps, needing so many many different things, where all this is contained within Chrome.  It's so easy.  Trust me, start to use it, and I think you'll find that traditional OSes feel so archaic.

Anyways, how does this perform?  I was kind of concerned that an i3 chip may not keep me as entertained.

Well, simply put it outshone my i5 Pixelbook... keep in mind that is what... 3 years old now; but even still, same amount of RAM, with a 'lower' processor, yes this thing just blazes across my apps and work no problem.  I'm running YTM in the background (or Netflix on a spare monitor), running a few peripherals (CD drive, mouse, keyboard, Yeti mic) with about a dozen ot 2 tabs all open cycling back and forth.

Even launching up Stadia it's great, even my Pixelbook sometimes has issues with some launches, this never an issue.  I did some of my recent livestream of Cyberpunk on it.  I didn't notice any performance hit.

The key is to have good internet.  Have my kid watching youtube, playing Fortnite and discord chatting and if wife is watchign Netflix... if I fire up Stadia - I may notice the res drop a little, but still some pretty fluid action.

Sound is pretty good, not tinny at all.  I'm not getting a super wide range of acoustics and being able to really pick up on the nuances of my music, but playing some game I can definitely tell when the bullet is coming from left or right of me.

Outside of that, the battery life was really good.  I don't know about nearly 14 hours.  But, I did set it up for one of our band nights when we have poor internet in a hall connecting to a projector, an external webcam, bluetoothed speaker etc...  My old Chromebook can run that for about 90 minutes and I can start sweating that it's getting down to the last 20%'ish or so... This had no problem and was about 50% after a grueling 90 minutes.

Overall, this is a great device to get that balances quality performance and not having to really shell out a ton for it.  Sure, there are cheaper devices, and you'll notice the performance hit.  For the spec-thirsty there are options but you're going to pay way more and I honestly don't think you'd notice that difference.

Plus the addition of something small, like the fingerprint sensor is cherry on top.  The silent bonus (although you feel it) of the MIL-STD-810G standard, means it is slightly heftier, but will provide that background of confidence that you can give it a big of wing onto the couch, or toss it in the backpack and then that backpack gets tossed onto the desk without all the supreme care you normally would... or if you 're folks I know that hand it over to their kid to use as a tablet (because, yes, this does hinge all the way around, if you want to use it like a weirdo) and their kid drops it.  Not that it's indestructible, but it doesn't need to be babied.