Sometimes you want a laptop that is super portable and in doing so there's tradeoffs, usually a smaller screen and not quite the powerhouse you may want.  Then other times we're okay with a more stationary laptop so that we could have some bigger screen.  I remember watchig people picking out these massive 17" laptops... oi, that's crazy big.

Then there's something a little more of a compromise.  The Acer Chromebook Spin 713 is a good example of this. 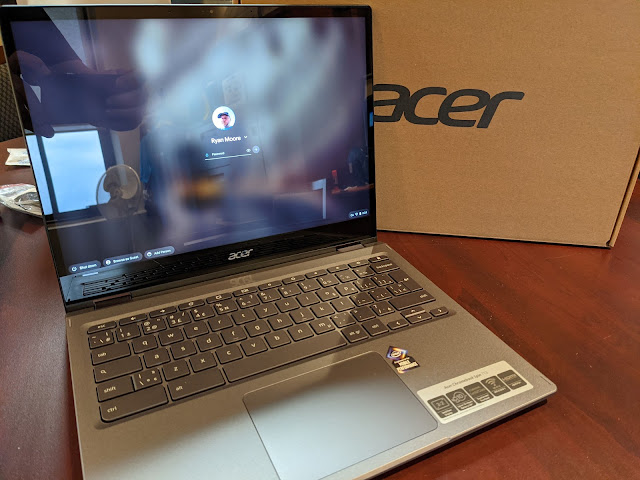 At $1000CDN it's not going to break the bank, but it's a nice portable size but includes a taller screen, and some beefy specs to it, without going overboard on making it thick and un-portable (yes, I'm making that word up). 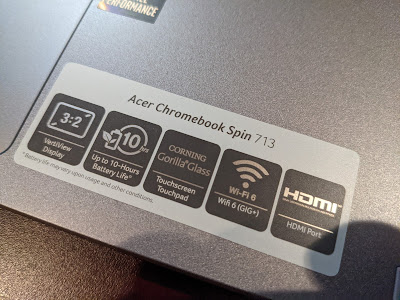 So the first that I notice is that we can use USB-C for power and it's on both sides.  That's the major plus in my books that I don't have to reconfigure any cables or layouts on my desk.

Speaking of the connections the need for my USB hubs aren't going to be necessary any more as there's a full HDMI cable option and a USB-A for my BT mouse and keyboard (will still need another or a A-C adapter for anything else). 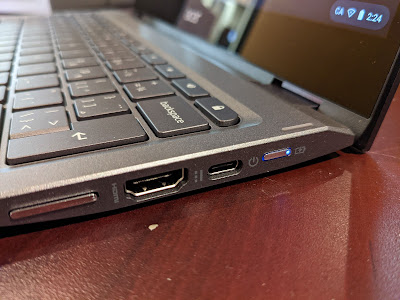 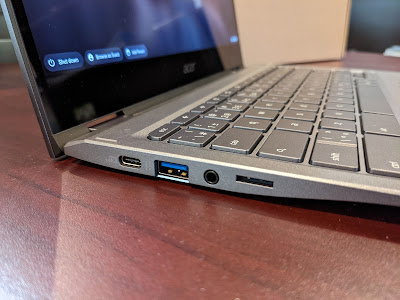 There's even a microSD card

It's minimal without being too minimal.

Where it's not minimal is the display.  Others may have quickly noticed the 'VertiView' - where the aspect ratio of the display is 3:2 ... meaning it's more 'square' than the 16:9 dispaly we've had for the past... oh, decade or more.  You need someone of my age who remembers those old tube TVs with that display ratio.

...but then you remember that really that happens when you're watching media of 16:9, and mostly I'm using this to work on the web, so the screens and content adjust accordingly.

Sure, some of the games I played with Stadia were in widescreen and it would have the telltale bars, but that was so rare (and often I'll connect it with an external monitor).

The next thing I notice is that like some of the laptops up here in Canada, they have that French Canadian layout, which means I can do the accents, but what I notice always is that they have that differently shaped enter key, which means that I'm a lazy typer and don't reach all the way over for the enter key and keep hitting the \ key.  A lot.

Seriously, I don't know why they do that rearrangement.  Someone tell me why!

It has a nice size to it overall, despite it having that extra tall display... and despite the increase in size it isn't bulky to carry around, just notice that the extra height of the display may mean it may not fit in just any case as simply.

It's also that slightly larger that makes using it as a tablet makes it less likely to be used that way...but with the 360 hinge, it is possible.

However you use it, there is a pretty good battery under there, that even with the larger screen it was on par to hit easiliy 8.5 hours.  Still a little shy of their suggested 10, but I've never seen often that actual use live up to the listed life.

It comes down to what kind of usage you have.  It definitely is not something I'll be worrying about using and the battery not lasting long enough.

Also, for the performance, the i5 with the 8GB RAM it has no issue with anything I threw at it.  Not that there's much I do that's really taxing with Chromebooks, as webapps are more about the internet speed than the device itself.  But how it handles juggling all those tabs at the same time.  Running Netflix on second monitor, and then about a dozen tabs on the other, bouncing between them all.

An odd point in using it was the fact that the camera on this for our Zoom meetings was much wider than others I'd used.  I can see how some would like that - just meant that I had to rearrange my little work space in the basement.

Really, this was all pluses for this... all the right connections, beefy power, even backlit keyboard.

If I had to pick something to be picky about was the fact that it had a pretty loud fan.  Most times whenever I'd lift the display there'd be a big 'whirrr'.  Not always, but often enough and loud enough that I had noted in my review notes a few times.

Not a big complaint at all.

I'd heard other reviewers talk about the speakers being weak, I had no complaint as I would just use headphones in areas where I couldn't be alone (and the headphone jack separate enough from other ports, I could use any jack I wanted)

This makes a perfect semi-sedentary laptop, sure it's almost small enough to take anywhere, but it's still big enough that it's just right to sit on your desk and take when needed; and it has enough guts in it to handle anything you need to throw at it.

Plus, I just love how Chromebooks boot up in seconds... best bang for the buck in my book.