On the heels of us all learning to deal with the fact that Google Play Music is dead (and forcing us on to a terrible platform instead) we learn today that Google is adding to their boneyard - Google Photos. 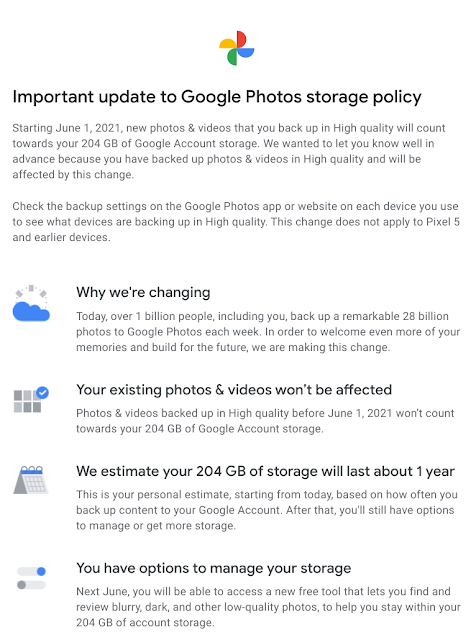 Okay, so that's a bit of an over-melodramatic reaction to the news.  The service isn't going away ... it's just getting neutered of its killer-est feature.  The one thing I tell anybody, no matter what phone they use, I tell them they should be using Google Photos.

Sure, it may not be at your 40MP super pixel resolution, and your videos may only be 1080p, but if you're really going to want that original quality, you've probably got some storage options lined up. Back up SSD, or you pay for cloud storage.

But for the majority of us aren't that discerning and having that unlimited storage option, not just for the phone in your hand, but I've backed up YEARS worth of photos we'd had.  Having that level of back catalog in one space is not only convenient, it's super handy when you pair it up with Google's smart tools.  I can't tell you the times I've been able to try to figure something out and going into Google Photos and looking back in the timeline of "Steve and park" and it'll pop up the photo I want, and from the details find out which park and when it was etc... it's solved a lot of debates for me.

Starting June 2021 any new photos added to the service will now start counting towards your Google One storage limit.  Most people get 15GB worth to start with their Google account.  I've upgraded myself to the 200GB amount for $40/yr.  And for that I've chocked it with 140+ ...

Google announced a new tool in the email that gives you an idea of how long the remaining space will last based on your current usage.  Apparently, I only have 3 years left before I'll be forced into a higher storage amount (meaning I'll jump from $40/yr to $140/yr - more than 3x the cost - albeit with 10x more storage, just sucks there's nothing in between) or having to start to ration out what I store, cull out the terrible photos and screenshots (true, I don't need my screenshots from a review phone 5 years ago); apparently a tool is coming to help you with that.

I don't have to tell you that I'm not happy with this move at all.  I get that, hey they're a business... but as all my tinfoil hat friends like to point out to me all the time, Google's business is extracting my data... that's my fee, and I'm happy with that.  Sigh.

The silver lining for me is that Pixel phones will be exempt from it.  Well they say Pixel 1-5 phones (would the 6 be the exemption?).  Another reason why I prefer to stay with Google's Pixels.  Other brands are going to have to work hard to really pull me over with a comparative storage if I'm ever going to think about switching.

You can read their notice about it here:  https://blog.google/products/photos/storage-changes/

What upsets me the most is that they say that it's a highly used platform and tout how many people are using it - but just say "hey we have to limit it to make it better for you".  A boss can't say "hey, we're doing so well and there are so many of you that we're going to stop the unlimited coffee so that we can help you more".  Just say "hey this stuff costs us a lot of money"... people would get it.