I like my tablet.  The Tab S4 has been my main home media consumption device, what I mean by that is that when I get home, I usually put my phone down and grab the tablet for reading books, playing games, watching some YouTube, whatever.

Now my main 'work' gets done with the Pixelbook, especially with a nice dock, keyboard and mouse to connect with a spare monitor.

But that's still rarer for me and the majority of time spent at home is on my tablet.  Having a good one is an important thing. Something that will be durable, portable enough and with enough chops that I won't need to be replacing it every year.  The S4 is over 2 years old and I don't see any less performance with it.

Samsung has always been a super safe bet, and one of the few real manufacturers making tablets with any consistency (unless you really want to look at those iThings).

At the base end of their flagship (and they do have cheaper tablets for those of you who are more price consciouis) for the $920CDN:

Now, if you're up for the S7+, that price jump will net you a larger display with a much larger battery, a better S Pen (9ms latency) and a slightly higher resolution (2800x1752).  Use your own discretion.  For me this is about the end of size I think I'd be willing to go for and still make it in the tablet realm.

Speaking of the size, compared to my old Tab S4 it is just a slightly tad bit larger, and the screen definitely is.  It's really noticeable when playing PUBG, my fingers have to move that slight bit more to play.  At this size, I definitely need a keyboard case.  Unfortunately, they sent me the keyboard case for the S7+ and it kinda looks a little ridiculous.

Going around the device you find that it's very 'block-ish'.  Sure the corners are rounded, but housing is all very flat with pretty tight edges on it.  I'll grow used to it. 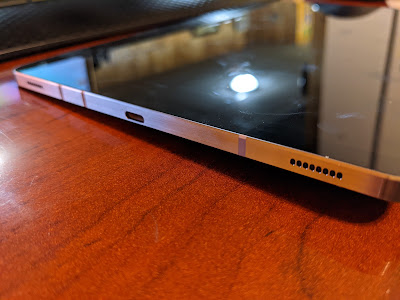 You'll also notice that they is no headphone jack on this at all.  Gone.  I'm fine with, but I also got used to plugging in a set while playing some games. 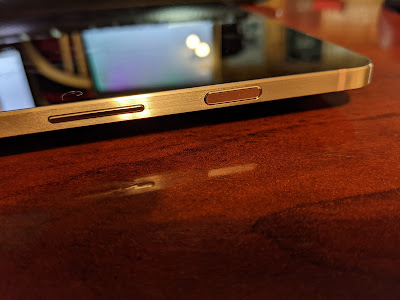 The power button has been upgraded to be a fingerprint sensor - which is a nice improvement.  Make sure you set up both of your index fingers to use it.  I thought I could get away with just using the right hand, but that's really only good if I'm using it in portrait mode, in landscape mode your left finger is closer.

Turning the device on you're met with the standard Samsung UI ... it's good and all, just I like to tweak it a bit as I go.

I didn't really notice a lot of new features about the device for apps... there were some AR pen drawing features, some more AR camera options, but not a lot worth writing home about.

There was the edge panels now... I don't recall being able to see them in the past for tablets, but we've seen them plenty in the S/Note phone series.

There is still a heck of a lot of duplication of 'Samsung vs. Google' apps going on.  Bixby vs. Assistant.  Calendar vs. Calendar. Contacts vs. Contacts.  Notes vs. Keep.  I get that their apps are designed for their device to get the most out of it, but I've found a lot of people who use the Samsung ones and then switch to a ... say Motorola, are left in the dark. Personally, my preference are to stay device agnostic.  Choose apps that will give you the best cross-brand and cross-platform usage.

What was really noticeable was that DeX (a desktop envornment type experience) does feel a lot more 'natural' on this tablet, and given the slightly more real estate than on the Tab S4, I found myself often in that mode than the traditional 'Android' mode, and sure it's not made for every app out there, but putting on the DeX 'labs' mode allows you to resize those app windows that don't conform and it handles them all pretty well.

The biggest advantage this year compared to my S4 (and maybe it was in the S6, or S5 tablets, but I hadn't gotten a real chance to review those) was the S Pen. 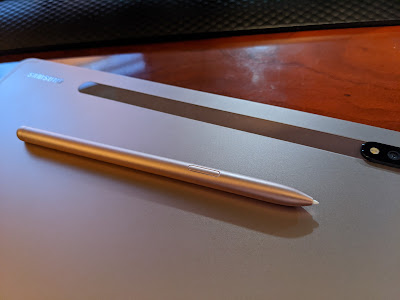 It's a sleeker looking pen, but the neatest thing was that it magnet-snapped to the back of the tablet. 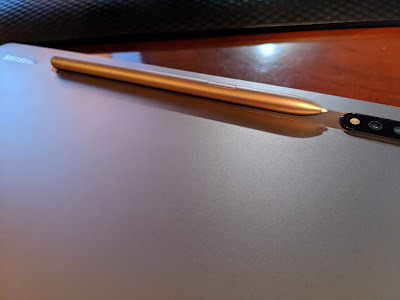 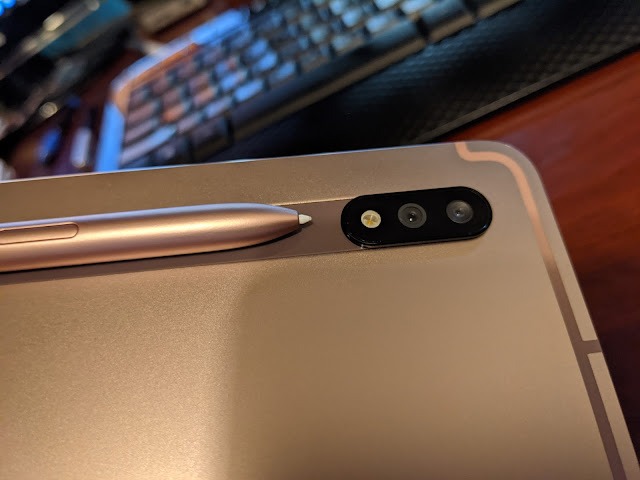 This has the added advantage that it was ALWAYS near you.  With the S4 you had to get the keyboard to get a little S-Pen holder.  It also is the way in which the pen charges.  Which is something I never really honestly gave 2 thoughts about over the years.  Sure, I've had to replace the AAAA battery in the Pixel Pen about once a year, but I've never had to worry about 'battery' in the S Pen for the S4.

I remember some Notes would keep the battery in their pen charged... so it made sense there was something to charge.  But, even with a battery life, taking the pen out and doing work and using it as a homework helper for my son (I do just love the ability with Samsung to just write on the screen when it's off) and other features, I never saw it ever dip more than a couple percentage.  Maybe you need to be a drafter or artist to be using it heavily for hours on end to be concerned.

I did notice some times where it was saying the pen was disconnected, or may need to be charged, yet it was functioning fine.  Unsure where those error type messages would show up.

Now, the way in which is sits on the back there (and get that orientation just right) is that it's out of sight and out of mind.  You might put it down on the desk a little harder and 'ooh, did I crush the pen?' - or I've put it on another book and the book is smaller than the tablet, and the pen hangs off the edge.  Go to grab the tablet and drag it off the book and the edge of the book 'peels' off the pen.

Not a huge 'deal breaker' just seems still a bit silly enough for me.  There could have been somewhat of a better placement option for it.

Overall, the pen still seems a novelty, not something of a real everyday tool.  But, maybe I'm not the perfect demographic.  Sure there are times that "oh yeah, I have a pen, that'll make this sketch up and note a lot easier", but at the same time if it wasn't there, I'd be just as happy.

For performance, the extra RAM over the S4 is noticed, not that I had much issue before. Same with the extra computing power.  It just screams through anything that I had thrown at it.  PUBG is super FLUID.  Switching between apps (was doing a lot of Chrome tabs, then Sheets and Gmail switching for our local football scores) was fluid and in DeX made even more easier as you can move them around without issue.

Something like this DOES need a keyboard.  Without the keyboard it's a bit large ish to just hold on to and makes doing any 'work' on it a bit of a chore - so it becomes a glorified media consumption device.  Which is alright, just I don't know if I would pay that much for that when something like their A series would be just fine.

Will have a review up of the S Pen as well as the Keyboard up on the site as well.