You'll know from my past discussions that I've kinda gone all in on Google and eschewed Windows devices at the house as I just no longer felt there was a need.  My son had gotten his Chromebook a while back and with the whole learning from home it worked just perfectly for him (we'll address the Minecraft for Education shortly).  Myself, I'd been using the Pixelbook as my main device, and I haven't felt like I've missed out.

So, I think most people can lose the expensive Windows laptops and desktops and just switch on over to Chromebooks and not miss a beat.  The only thing might be if you need a little more 'oomph'.  My son keeps saying that as much as he likes his Acer, it's a cheaper model and he notices some frame drop on some games or when running Discord, FB Messenger and a Minecraft server.  I'm often editing a photo on Pixlr, drafting an article, editing a webpage, working a Google Sheets and Docs and it does alright.  But running some of the Stadia heavy games it can be a little slow (not sure if it's Wifi or not specifically), but the Pixelbook is a few years old now.

Then when I was starting to think of that, along comes the Asus Chromebook Flip (C436). 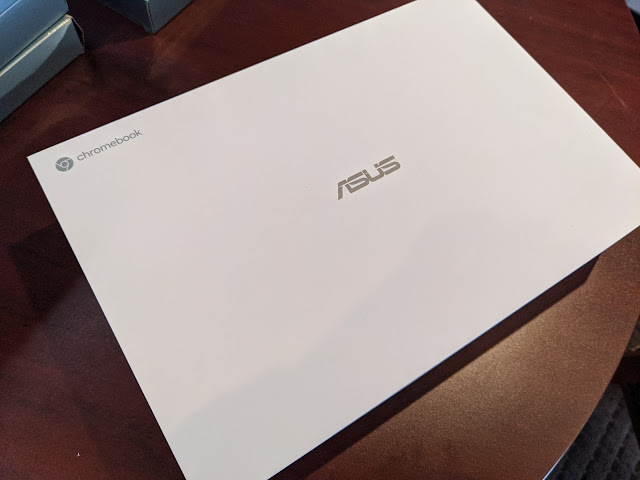 This is no cheapie laptop just for a kid, this has some oomph and then some.  For $1299.99CDN it's got that, a little bit larger screen and the full flippable display.

It's an impressive package, and for that screen size it's only slightly larger than the Pixelbook with only 12.3" screen.  Aside from being longer, wider than the Pixelbook, it's also a little bit thicker, which is actually a good thing and feels sturdy.  Sometimes when something is too thin it can feel a little flimsy.

I like the sturdy feel, and then I like the angles not only on the base, but for the lid and how easy it is to open. 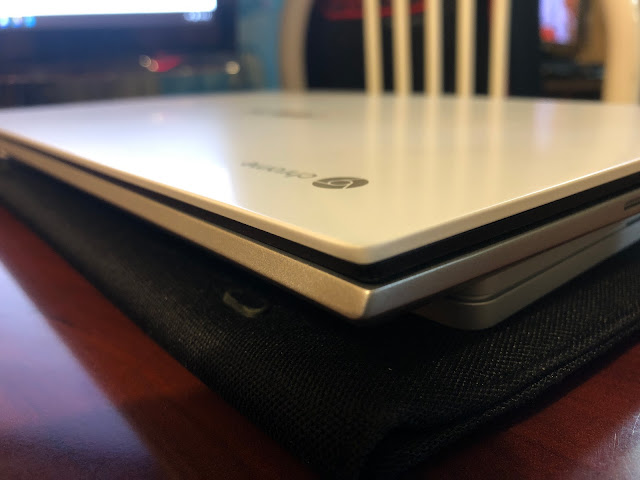 It has that sturdy feel, however the coating did chip in one place when I had it in my backpack.  Couldn't figure what caused it tho'. 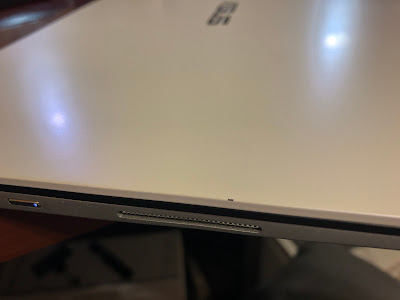 Going around the device, I love how it has dual USB-C ports, and either can be used for power.  That is a luxury that trying to do without just feels ridiculous.

Then there's also your volume and power on one side with the headphone (and I love the fact the space allows for my good headphone cable and power cable), and the other is a microSD port.  I always flip-flop on whether I want a full SD or microSD. 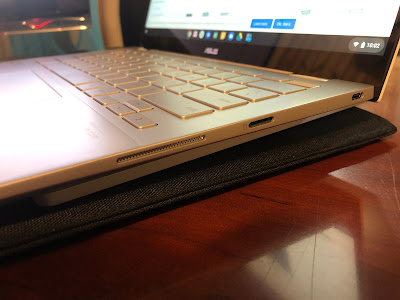 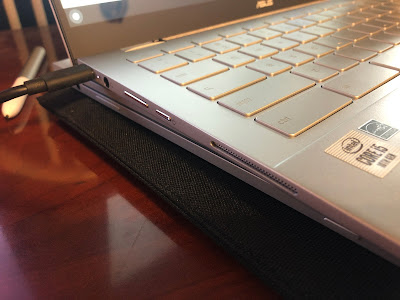 Looking at the sides of the device you'll also notice that it has little speaker grills, and then there's also stereo on the bar at the top of the keyboard, and it's not just any ol' speaker, it's Harmon Kardon.  So it's quality sound.

It's just not loud sound, like I kinda expect.  But then again this IS a laptop.  It's not meant to be a symphonic device.

Overall, for size, it's a great size for the display.  It's only slightly wider, but definitely not as long as a much smaller display Pixelbook. 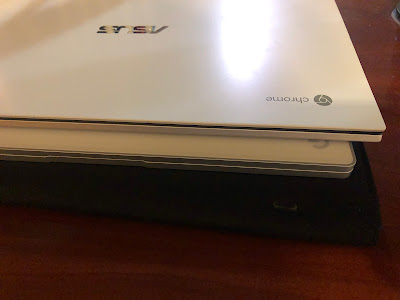 The great feature I like is that it has the fingerprint sensor, so long as it didn't just boot up, you can just tap your finger to it and it'll open up.  That's faster than even using the smart unlock with Pixel. 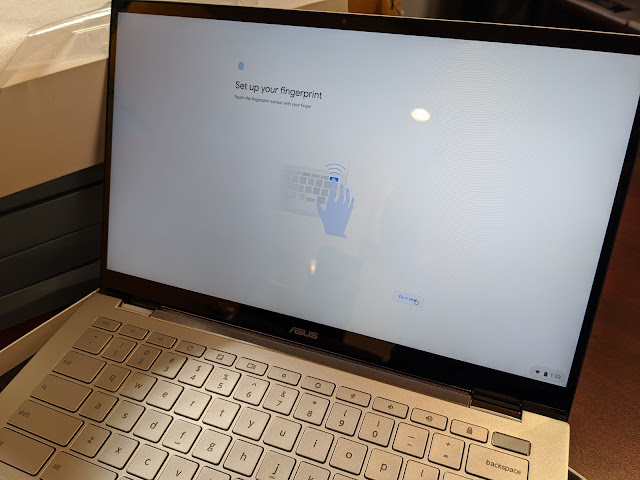 It's got the typical Chromebook amenities, which ... are more than enough for me.  Everything you need to do you can do from the web or via an app from the Play Store.  But mostly from the web.

Like I said, I do most of my 'major computing' from the Pixelbook.  It makes some tasks that I can't easily do from a mobile device easier and I've been taking to using the Google Sites for a few projects I've worked on and there's no app for it yet and you can't use a mobile browser, it has to be done from a desktop.

It performs everything it can like a champ and I haven't noticed any stutter on it.  I've pulled up photos for editing, documents for writing, sheets for tabulating, facebook for posting and having a window on another screen running either YouTube or Netflix.

Not only does it perform well, it can last.  I haven't had a chance to really play with it for a super extended period of time, but I did use it for a couple videoconferences.  I had a videoconference going with a microphone, projector connected, external speaker going for over 90 minutes.

For that time it had dropped down to 37%.  And then it said it still had 92 minutes to go.  Doesn't seem like much... that the battery should only last 3 hours, but it was a heavy duty usage for that.

The next videoconference I didn't need the mic/speaker/projector and another 90 minutes later it had dropped to just about 20% and still said it had an hour go to.  90 minutes of simpler usage for ~20%.  So if that works, that'll be 450 minutes... that's 7.5 hours, which seems decent - yet they claim it's a 12 hour battery.  I guess 12 hours if it was just simpler usage than video streaming.

All in all, I am going to miss this powerhouse of a Chromebook. All guts, none of the bloat and unnecessary stuff you get with those other OS devices.

It's expensive for a laptop sure, I can't ignore that. As such, it is mean to really replace a more powerhouse role, and not just a media consumption type device.  There are lots of cheaper / cost effective Chromebooks for that.  Like my son's Acer.  But if you want to start using it for a lot more than just basic - you'll want a few more guts.  And this has that.