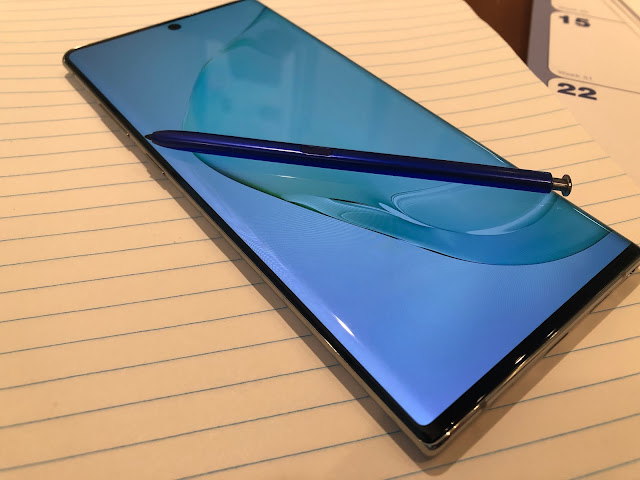 I don't think that however, I frame this discussion, we do have to start off by mentioning that this phone is $1700CDN.  That's a large pill to swallow, even if you're getting it subsidized it's still about $1200 you'll be forking out over the term (an extra $50/month).

Okay, the Galaxy Note 10+ ... probably the most evolved phone out there.


Specs... right, so because it is so expensive, there's got to be some great guts in there, right?

That's the inside of the device, but as much as we care about the inside, we really need to feel it too.

Taking a tour around the device we are... well, most of the people who have seen this as I had it were wowed with just how cool it looked.

Just look at that shmexy colouring of the back.  Hypnotic.

But what's really hypnotic about it is the fact for bing such a 'big' phone, it is teenie tiny.  It is super skinny for something the size it is that has a big battery and is housing an S-Pen too.  How is that possible?

Going around the device you see that it has the S-Pen on the bottom right, and because you're pulling it out of the phone on the right side, that means your hand is busy on that side, so the control buttons (volume/power) are on the left hand side.  I get it, it just is awkward to what I'd been used to for quite some time now with other devices that they're on the other side.  Takes some getting used to.

You'll also note, looking around that there is no headphone jack.  That's officially gone from their flagship lineup now.  There was no adapter in the box either (unless there was supposed to be and from this being passed around reviewer to reviewer it got lost).  No big loss to me (but hey, I would love to appreciate a wired connection with my AIAIAI headphones) - but to help you out they did include a pair of AKG headphones in the box.  I didn't test them out because - well, I didn't want to know how many other bloggers had been playing with these so I left them as is.

But it's so ... thin.  It's almost hard to hold actually.  And if left on it's front face it can slip and slide around very easily.  But holding it I found myself having to hold it in such a way to be able to hold my pinky finger under it so it rests properly because it was so thin.  You'd want to put a case on it, but then would it block the cool back, or add so much bulk?  It's a big phone for how tall it is, so a case would make it a bit too bulky.

The total symmetrical feel of the phone also makes it somewhat awkward once I put it in my pocket and I go to pull it out, I forget how I put it in

Okay, that's it physical feel of it, let's turn it on.

The device uses the in-display fingerprint sensor, like we saw on the Galaxy S10.  I found that it was placed a little too high for me.  Others that use in-display, the 'spot' was close to the bottom, but with the Note, it's about the 1/3 height spot, so I have to lift my thumb a little higher.

It's also got about the same success rate as the Galaxy S10 had.  It was fine... but about 1/3rd of the time I would have it not read properly.  It was tough.

So, I turned on the facial recognition and that works great.

Now we're in.  Let's see what we can find out about it.

Typical Samsung style there's a lot of Samsung to wade through.  They had gotten better, but there's a whole folder (I created) of just Samsung stuff.

They're not bad, but I just got tired of them.  The Samsung keyboard is just ... well, I don't want to say the worst, but I hadn't had that many errors in so short a span using it that I just couldn't anymore.  I tried.  But had to put a different keyboard in.

The calendar ... again I just prefer Google's.  I just like the fact that we can just get another app to replace what we don't like.

We have enough space on the device to not worry about how many apps we put on there.

One thing you should check while you're digging through the settings - for some reason they turn the resolution down ... it's odd that the lower resolution is the default setting.  I can't imagine it's a battery saving feature (are they not lighting some pixels?).

You paid for the 10+ to get the QuadHD mode, so why not enjoy it.

Okay, but what else is there.  Samsung has its typical features, like the edge panel, a game mode ... some pretty good things that I enjoy and have covered in other Samsung articles, so I don't want to beat it to death here.

It also has the S-Pen, which works so well... I believe it's a lot of the same features, you can draw on the screen off (but now it's in colour - were the others?), as well as using it to hover and preview.  The best is just how well and smooth it responds. 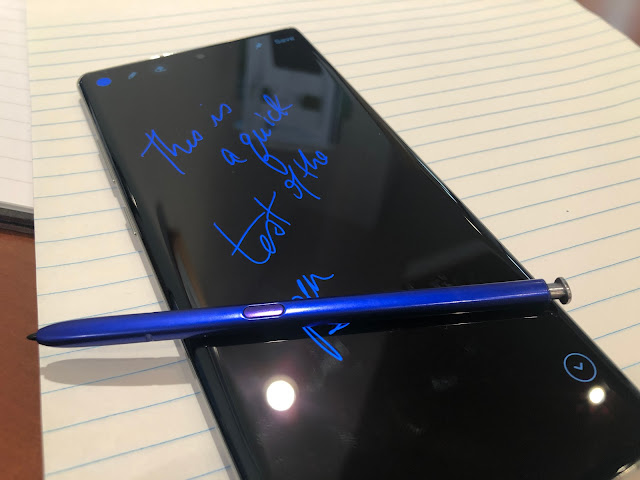 The pen is small, the Note 9 had a thin pen as well.  I found it a little too thin for me, but I get it.

The advantage they came up with for this year was that it now has 'air gestures'.  Essentially you can now use the Pen to interact with your phone without it have to touch or hover.

First off, the button acts as a a shutter control for the camera.

Some pretty neat functions.  Outside the camera, up and down does volume

While we're discussing the camera, that is one thing Samsung is known for.  It does take some great photos.  DxOMark gives it a rating of 117 (which beats the Pixel 4's 112).

As for the camera, I do like it.  Personally, maybe it's the Google adjustments after you snap that make me really love my Pixel, as I find the photos from the Note not as quite as good as that, but it's still amazing photos.  Great tack sharp focus, and great colour as well as wide range of exposure.

My favourite thing about it (and I wish my Pixel did this) was that it had button/indicators to tell you which of the lenses it was using.  There are 3 of them on the back.  So you can just tap an icon to jump to that 'zoom level', but you can also zoom at increments in between, and it'll tell you when you switched lenses.  With the Pixel you just don't know.

I'll put some samples below of the shots I took with it.

So, when you pay for a Ferrari, it better be a top end performance.  And this phone delivers performance.  It is so fluid.  I loaded up PUBG and Fortnite and no problem of it being just fluid.  Not an issue at all.

There was never a stutter, never a lag on this device.  12GB totally totally does its job here.  It's got a screaming engine under the hood here.

With that kind of horse power, it might have a big drain on the battery, right?  Well, yes and no.  This is 4000mAh, so there's a lot of juice to be had.  The device does have a good battery life, not great for what I would expect 4000mAh to be, but this is a 6.8", QuadHD display with a huge amount of processing power on it.  So, I'm still impressed by it.

Now, something this amazing, has to have some issues, right? True enough, nothing's perfect.

Sure, I wish there was the 90Hz display, but I'm not heartbroken by it.  It's fine.

But, there was an issue I had a couple times with the S-Pen.  It was weird.  I'd take the pen out, and I could use it, but the little notification in the top corner had the pen icon with a line through it.

I would go into the settings and it would say the pen only had 8% or 20%.  I assumed by keeping the pen in the holder it's supposed to be charging it, but some reason it hadn't.  Then it would say I had to put the Pen back in to connect.

Happened a few times in the week I had it.  Maybe there'll be a software fix.

But that's about the only thing I could come up with against this device.  Outside of that (and the price) it is the text book perfect device.