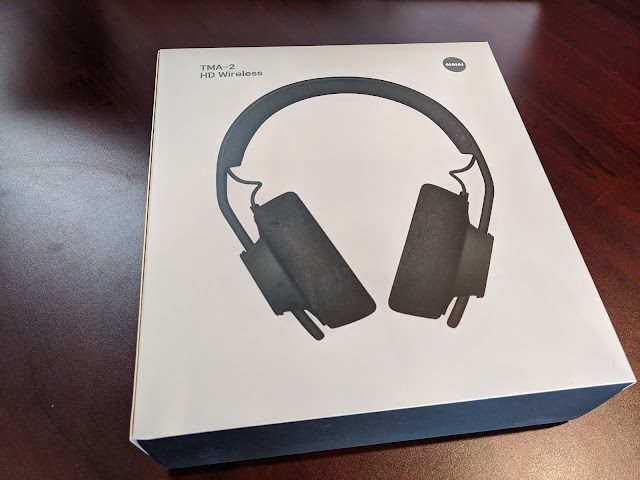 Okay, ... some days I'm not always fully caffeinated when I read my emails.  When companies announce products and are looking for coverage... I skim.  Ask any politician, do they read all their briefings?  I'm guilty with this one, I'll be honest.

The parcel came in and I was met with the TMA-2 modular headphones.  I should have looked a little deeper in and realized these $350USD headphones were more than just the IKEA of headphones. 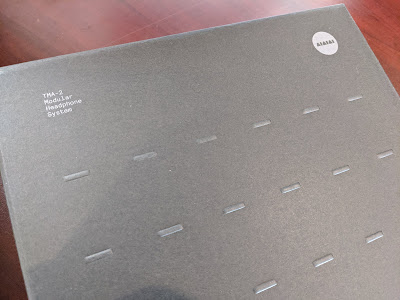 Modular headphones - meaning you can pick and choose which types of speakers, or cushions or what type of band you get, even what headphone cord.  You have multiple options to choose:  5 different speakers / 6 different cushions / 6 different bands / 12 different cords ... 2,160 variations possible (from roughly $145USD - $350USD) 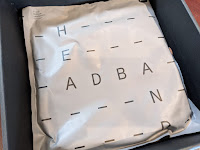 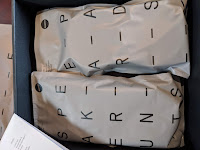 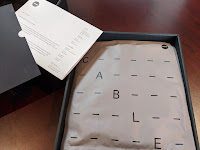 Okay, they're unboxed, assembled (and it didn't take much to do that, very easy to do) and I put them on: 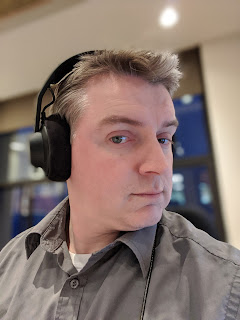 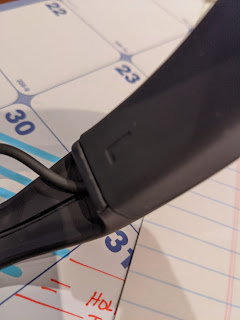 Learning which side was which took a little bit of looking as the lettering was a little too subtle.  Having the cable able to go on either side is a nice touch, but makes it a little awkward to remember which side is which (and they really make sure you connect the red speaker connector to the red cable so you keep L/R distinction.

They feel super comfortable, not so heavy... great feel of the cushion.  Nice.

Plug it in ... and you'll notice that the cable it came with also has that neat little lock and turn to keep the cable in the port.  Cool. 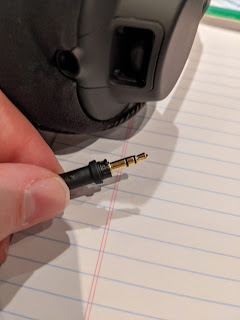 Except that means you can't use any cable for this except theirs.  I have a cable plugged into my Pixelbook that I just pop different headphones onto when I need to ... but because of the lock system I can't put it in these headphones.  And the cable 'sheath' on the other end, it's too wide where the headphone jack is and the port are too big to be next to each other... #firstworldproblems.

So, yeah ... as in the video I say ... I plugged it into my work laptop, and fired up the music and started to crank it.  I wasn't looking to start rating the bass and range quite yet, I like to see how loud it gets.

And it didn't seem to get 'overly loud' or have that distortion or start to crap out you tend to get at the high volumes - instead, it stayed clean and clear.  It was like I had been looking through a dirty window forever and someone just washed it.

I was impressed!  Beyond impressed.  That's when I started to look it up more to get some specs and whatnot that I noticed the price tag.

On paper, the specs didn't seem too spectacular ...

I've seen similar specs ... but they were far surpassing just what was on paper.  Had I been listening to garbage all along?

But, a lot of what I'm using does not have a headphone jack (tho', I'm really enjoying using them with my Stadia remote) - and this band is the Bluetooth option one.

Even better, it uses USB-C to charge up the headphones (and apparently you can even get firmware updates - but you need to have Windows/Mac for the installer). 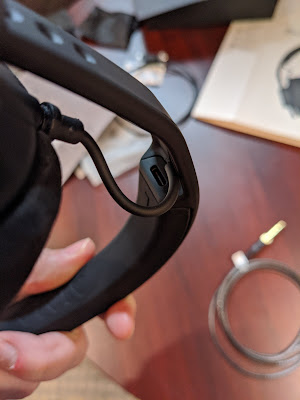 Charge it up and it's ready to pair up to your device, the cable port is just tucked away at the end of the soft part of the band.  Neat, love how it's out of the way. 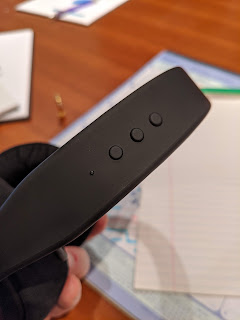 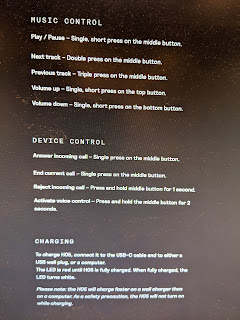 I got lucky because I assumed the button mapping was universal.  I held the middle button down like I would normally ... the first time turning it on it put it in pairing mode so that was easy.

Turns out they do something unique here (is it an Apple thing?).

To turn off the headphones you long-press the top button.

To top off the 'weird' ... well, not weird, different... the buttons are on the top of the band.  Not only are they on the left-hand side (and remember last time I reviewed controls on the 'wrong side') so I'm already a little discombobulated, it's just that extra bit of bringing the fingers to the top of your head... looks like I'm scratching my head confused.  It's not wrong, just different than what I'm used to.

Outside of the awkward controls it works just fine.  Now, the funky part is I find it doesn't get as loud via BT than when it does via cable... not sure I've ever noticed that before.  Hrmm.

No matter.  Battery life is good.  I've had about 3-4 hours of use with them now via BT and they're about 60% left, so I can sense that they'll get about 8-10 hours easy.  They claim 16 hours of use, but I've never met a set of headphones that really meets the battery life, especially with elevated volumes how I like 'em.  Still, that's about a full day at work and maybe a little bit of a commute... depending on your commute.

For me, I love these.  I'm finding that I'm packing them in my bag for work now.  The walk from my back to door to the van, I put them on.  Get in the car, take them off and drive to work.  Get to work and get out of the van and the cans go back on.  I'm listening to all my music with a new set of ears and really hearing all the elements.

It's not all bass like some (the S05 have good reproduction across Treb/Mid/Bass) and it's a great balance of all sounds ... nothing is blocking other sounds as they mixed it.  Sweet.

Now, it's expensive.  Sure.  But if you love music and this is something you really want to appreciate them with ... you'll want these.  If you really love Scotch, you don't drink it out of a sippy cup.

If it's too expensive for you, you can look through the TMA-2 builder and see what the cost would be based on the different features you don't mind sacrificing.  But, wow... I think you'd get every penny of worth out of enjoying the sound out of these.
accessories AIAIAI audio bluetooth Headphones Review video