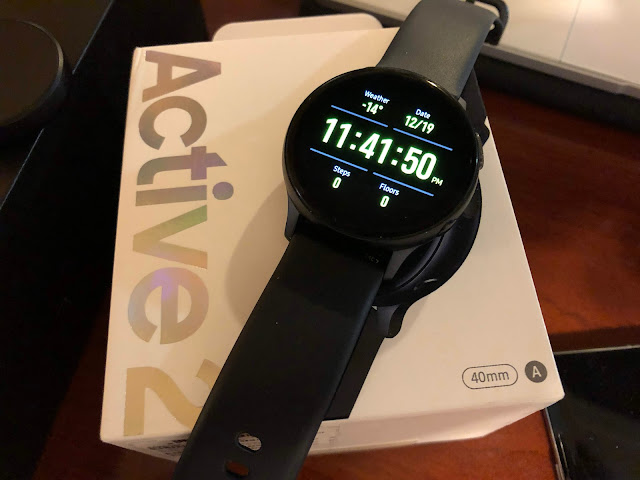 So, it's going to be obvious that I have a little bias with this review.  I do love a full fledged smart watch with mirroring a lot of my phone functionality.  But, then I can also get by with just a minimally supported fitness band.

I can live in both worlds.  I like the Mi Band 4, but I absolutely love my Casio Pro Trek with Wear OS.

So, getting to review the Galaxy Watch Active 2, I was excited to try it out.  I'm entrenched in Google services like Fit, but I can use things like Samsung Health - just wish it would share data like the Mi Fit does.

The TL;DR of the review is going to be that I found this to be somewhere in the middle of those 2 extremes.  It didn't have a lot of the same functionality as Wear OS - but it had way more functionality than a basic activity tracker.

On the sprectrum between the two it definitely sat more closer to the Wear OS end, but what I'd found out in the week or so I wore it was that it definitely had some limitations, and the Tizen OS they built for it was not as user friendly as Wear OS has been.

Let's get into the review.

Okay, this is a $400 watch (for my American viewers this is in Canadian funds remember), which isn't too far out of the realm of most watches out there with smart functionality, and you can usually find it on sale for around the $350 mark, so it's a pretty good buy price.

Let's look at the specs you get for that 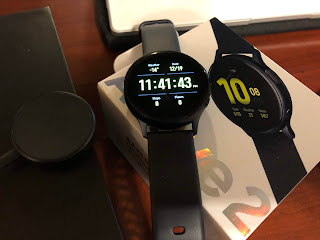 Taking it out of the box, you get the watch and its especial wireless charger.  Now, it's magnetic, but it's not magentic enough to hold it.  It's also no Qi - was hoping to be able to pop the watch on my other Qi chargers, but it wouldn't work there.  It did work with the Note 10+ in reverse wireless charging mode tho'.  Odd.

Getting the watch out you have a nice band, it's very rubbery, but still very sturdy to fit on your wrist.

The weird bit is that the band isn't like your typical band.  The loose end actually tucks in UNDER the other band.  It's a little odd, and I thought I'd have a mark on my wrist from the end of the strap, but never did.  Just felt a little odd to set it up that way.

The round display has 2 buttons on the right hand side.  The top one is the 'back' button and the lower is the button used to power it on or off (if you long press it) or just go to the home screen.

Strap it on, and set up the pairing on the Samsung app you think you're all set.

Neat that it includes a cool few features that I hadn't really seen on Wear OS.  You can back up your watch details for quick reinstall on a new or next one.

You can have special 'smart relay' on the watch so that notifications launch the equivalent phone app.

I liked that it can send your watch photos to the watch for viewing, you can't get that on Wear OS.  And the fact you can have sound on the watch.  So watch Youtube, listen to MP3s (but not Google Play Music tho').

The sound brings in an issue with notifications. You have to pick your ringtone and volume carefully because I'd forget what volume I'd have it set.  Sure you can set it to silent, but I found the vibration for notifications not as good, I felt like I missed a lot of the notifications.  So I set it to the lowest volume and had a soft tone.

Speaking of notifications and feeling like I was missing out on some.

Turns out, unless you're using just the built in Samsung apps for calendar / messages / etc... it turns off all other app notifications by default.

If you use anything else but, you have to go and turn them on.

You get the picture.

Everything is turned off, and unless you think about it you have to go and find that settings to turn it on.

So, continuing on the theme of notifications, the way it works on this watch is that the notifications are on the screens to the left of the 'main screen'.

Different than what I'm used to... but I can adjust.  The problem I have with it is that it is VERY sensitive to the touch.  A slide tap with a swipe upwards deletes/clears out the notification.  With Wear it's a longer swipe to the right/left.  It's petty deliberate at the amount it needs to swipe.

With this a slight nudge upwards deletes it.  Often I wanted to tap the notification for more info, but it would accidentally nudge and then clear.  Garr.... it takes a lot of getting used to.

Swiping to the right of the home screen you get 'widgets'.

Back to the home screen - you can set new ones, but like Wear OS, there are only limited types on the device, and other ones you have to set up from the app on the phone.

Just like the apps themselves you'd want on the watch, you set up from the phone.  I get why Samsung wants to have a separate app away from the Play Store, especially as the Galaxy Watch uses a different operating system it would need to ... but it's slightly feeling like schizophrenic.

Outside that bit, the watch is very responsive, having no real 'stutter' that I'd notice.  Everything worked as it should without any question.

Even better was the battery.  340mAh seems smaller when some of the other watches can be around 400 this watch lasts a long time, well it should get you about 2 days of use.

Even still, I was putting it on charge over night - I couldn't find a good Galaxy Watch sleep app.

Using it for the activity features was great, it was nice for Samsung Health to measure stuff like the number of floors I had climbed.  It was very accurate - especially as I have a 'stairs always' policy at my office (7 floors up).

I just really wish that the Samsung Health would sync with Google Fit.  Samsung really has made tying you into their ecosystem their raison d'etre' ... if you have a Samsung and always stay with it, that's fine - but if you're like me, or most people - you never know what your next device is going to be and losing all those ecosystem specific data is a pain as you start anew.

Sure, you can use Samsung Health on other devices than Samsung, it's just not as easy.

Overall, it's a good watch, doing what you need ... I just found it somewhat odd of it being just slightly off from what you get on the watch, and especially odd as I'm so used to Wear OS.  I found as much as it had all the prospects of being its own smart watch, it was still slightly off the mark and fell somewhere in between a fully smart watch and an activity tracker with smart watch features.