The Xiaomi Mi Band 4 Review - a good thing getting better 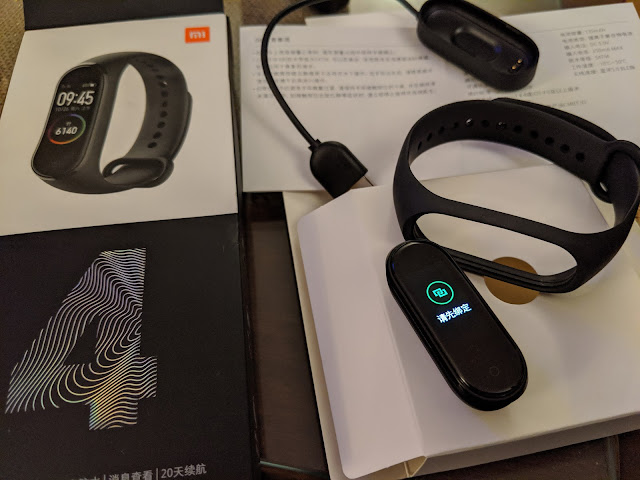 So, I still love Android Wear... err, I mean WearOS.  I do, I just think I need a break from them for a while, plus my new order of the Xiaomi Mi Band 4 just came in.

I'll be honest, because of what this site is, I often end up not having to buy my own tech, but there is the rare time that I'm so intrigued and the price is just right that I go ahead and buy it.

The Mi Band 3 was one of those instances and well, it struck the right chord with me so that when the 4 came out I kept my eyes peeled when I could buy it.

But I found it on GearBest just slightly cheaper, and it was before the Amazon links were up.

Plus, and I can't be sure, but because it's the Chinese version I bought, it seems to have AliPay, not sure if that means it has the NFC built in, I don't have AliPay to test it out.  It does look like there's no NFC (it sets up AliPay to be used with the QR code).  Dang, was hoping to do some hacking and see if I can't figure out some neat things to do with it.

Anyways, it's been bought and let's dive into it!


So for whatever price you're going to pay (definitely under $50, and let's see you try to find some FitBit alternative that is this inexpensive) what do you get?

I could tell you that it's got 32MB storage or 64K RAM, but it's a meaningless feature to how you're going to use it.

The take aways are that it's now in COLOUR!  That's pretty cool, and its no crappy low res colour, it's AMOLED.  Pretty good for it's <1" size.  It's also a slightly larger battery than before.

Let's first talk about battery.  I'm used to WearOS where a day is good, 2 if you stretch it.  This is hitting about 20 days if you stretch it.  About 24 hours of use cost me 6% of battery.  That should amount to 16 days of use.  If you turned off the heart rate monitoring I'm sure it would easily hit 20 days.  I like to have that and the sleep monitoring.  So I'm okay with it lasting 2 weeks.

You're going to like the battery, and depending on the face of it you can always see your battery, so it's easy to monitor.

Even where I was using it for a week of running and measuring, a heavy week of activity .. like 10 days, it was down to 27%.  So that would have meant almost a solid 2 weeks.

Makes it really easy when to charge it up it may take maybe an hour (depending on your charger port).

And that's the first thing I saw that I didn't like.  The charger.  As the unit itself uses the same band holders as the 3, I was hoping that it could use the same charger.  But, nope.  It's got a special new one. 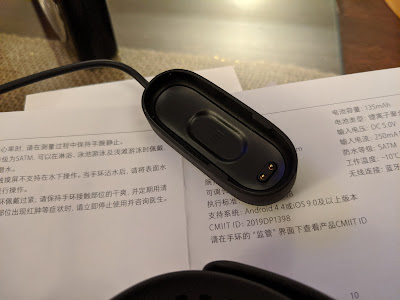 No biggie... but where I'm concerned is that the charging pins are now facing downward onto the skin.  This poses a question of how long the charging pins will last before salt and oils from the skin ruin them (on the 3, they were on the side of the device, meaning they were 'hidden' beneath the band).  I've had issues in the past with my LG G Watch where the pins slowly started having troubles making contact. 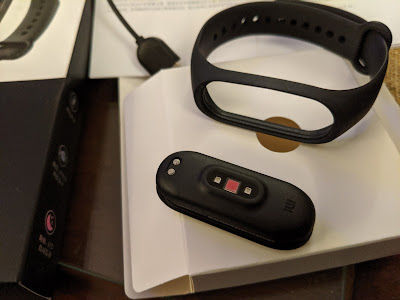 We'll see how it fares over time.

The 2nd thing that kinda irked me about it (and these are the only 2 about it) is the fact that the little 'concave nub' where the button was on the 3 is replaced by a flat chin with just a slight little circle you can barely see.  This makes it super hard to tell which side is up or down when you go to put it in the band. 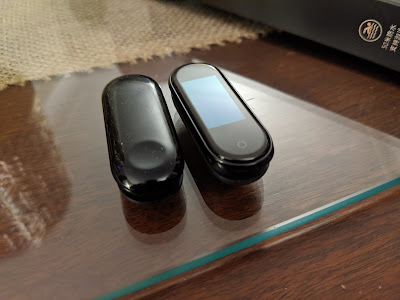 It works fine, just you gotta know where it is, and without that physical indicator, it's a little hard to find at first.

Okay, but tap on the screen and you're met with colour display that looks really good. 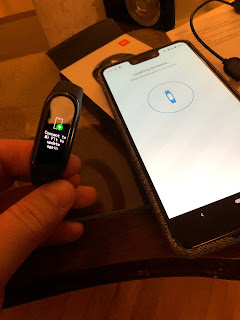 It's the Chinese variant, so you're met with a Chinese screen, but it pairs all the same with the app and then it's magically in English.

The layout is fairly easy to understand, similar to the 3, you swipe up and down to go between the items.  The app lets you control the order.

Tap on an item to see the sub-items.  Either tap the 'home circle' to go back a level or you can swipe Left to Right to go back.

Since I've gotten it there was an update that allows you to swipe through the items and cycle backwards and forwards (when I first got it you could only swipe down to the end or up to the top, but not go back... now you can swipe from the top to go to the bottom, etc...).

However, with sub-items you can't scroll cycle... so if in the 'More' item you want to just swipe up to go quickly to the bottom, it's not possible.  Minor inconvenience.

I had in my original notes that I found the interface a little unintuitive, but after a week I'm not having any issues.

So, new additions to the system (which they haven't included on the 3) are super welcome... first up is music control! 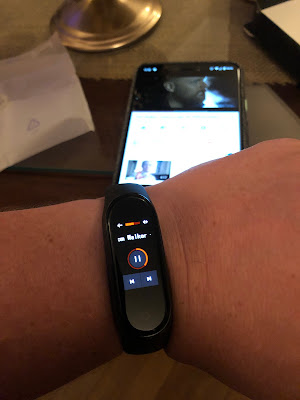 On the main 'screen' you can swipe left or right.  You go to the right and you get the option for AliPay, swipe again right (or go left from the main) you get the music controls.  It shows the name of the song, and pause/skip/volume controls.

That's awesome.  I'm guessing with the improved screen, it's easier to have finer motor controls over what you press.  You see even in the timer section you can set up how long you want to count down in minutes and seconds (whereas on the 3 it just wasn't possible so they only had stopwatch.

The downside to the music controls, or pretty much any of the features is that you can't really 'hit home' to back out of music to check your steps, or while running, can't back out of the exercise tracking to skip a track or see a notification.  That's where I really miss WearOS.

Speaking of activities and its working, the single best improvement to this year's model is the fact that they have more options for exercise.  On the 3 you had 'treadmill' and 'exercise' (whatever that means).

Now, we have 'outdoor running' (oh, and it says GPS too... but not sure I trust it too well, some of the items that port over from Mi Fit to Google Fit, look a little erratic for the GPS), then there's treadmill, cycling, walking, exercise, pool swimming. 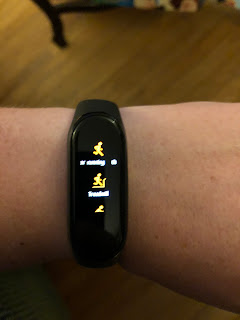 Plenty of options to play with!  YAY!!!

Another nice bonus surprise was that when you put it on charge (it takes about an hour or so) the phone app gives you a little notification to say it's complete.  Unexpected bonus!.

Now, the one rabbit hole I didn't really dive down, because it seems a little ungainly to me, was changing the home screen.

In the app, there's a lot of options, but mostly generic boring or anime / kawaii look... to get your own custom, didn't seem like a super intuitive process.

Some sites talked about going into the Android/DATA/ app files and overwriting one of the options ... doesn't sound fun.

There are apps on the Play Store, but I was a little leery as they're not 'official' and looks to be the same process.

I hope Xiaomi will make that bit easier.

Well, it's a great band, with the 3, and if you have the 3, you may enjoy the updates.  If not the 3 is fine, but still the prices haven't changed, so you may as well go buy the 4.

Now, I'm on the lookout for the 4 with the NFC so I can see what we can mod for it.