Posted by Ryan Moore on December 03, 2019
[n.b. - this article may seem like I'm dissatisfied with the product... know that I'm not ... there's just one aspect that I can't get my head around, and I'm totally ... TOTALLY willing to blame myself for not understanding it - enjoy]

I'm loving turning my home into a voice controlled lighting experience.  Now, it's also the holiday time and there are many out there who want to turn their homes into a decor of Christmas twinkling lights.  I hate setting up the outdoor lights.  Having to get those clips to hook on to your eaves.  I've sort of gotten away with not having to do that by putting lights in our window.

Not the same as around the house, but when you've got fairly sized windows, it's okay for a lazy guy like me.

Why not step those lights I had to hang in the window and give them a modern twist.  Introducing the Philips Hue Lighstrip.  Now there are outdoor ones you can get, but I wasn't fond of still having to go outside and find a way to install them - even tho' they should be still good to work in our bitter winter. 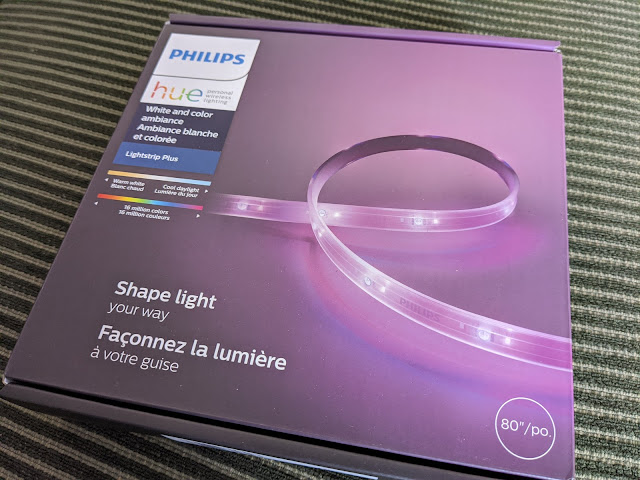 So, let's play with the indoor set, stay warm and hopefully have the same effect.  This $100CDN set will get you 80" to play with.  Let's play!

There is an option for $120 at Best Buy where you can get the 40" extension.  You can see at the end of the strip there is a little 'connector' type strip and extensions will just plug into it.  80" doesn't go as far as you think it might.

Okay, mind out of the gutter.

Open up the box and you'll see that there's the AC adpater, a little cord to plug into the strip's base which helps give you another couple of feet to play with so you can find a good plug in.  Luckily I have an outlet near enough to the window. 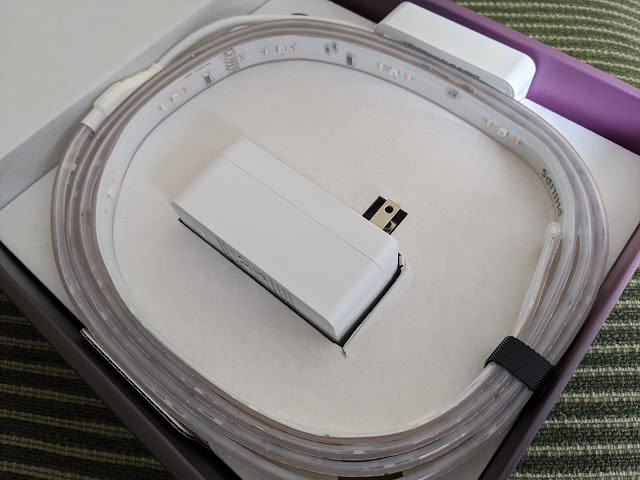 Looking at the LED strip you'll see there's the 3 bundled little LEDs spaced evenly apart for some lighting.  The underside has an adhesive strip, so once you find where you want to put it, you'll get to affix it in place. 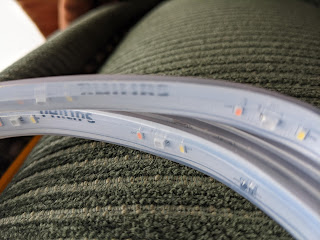 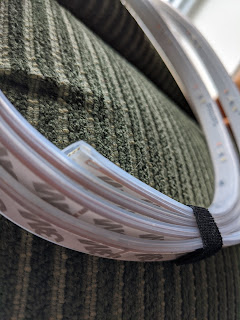 Check the manual to make sure how you put it in place when you have to bend it, as you don't want to bend the strip on an actual LED bundle and break it, and then the rest of the strip is toast.

Speaking of that, if you want to shorten the 80" you can cut it as well.  Do it when it's not plugged in tho'.  Safety is number one priority!

At first I just plugged it in to see.

Set up was super simple with Philips Hue app, just load it up, and go into settings to add a new device and it's already recognizing it, and assign it a room.  I made a new room called "front window" and set it in there.  I wanted it separate from my "Living Room" as I usually start the morning with talking to the mini by saying 'turn on the lights' and if the strip is in the same 'room' then it'll turn that on too.  So this is a way to isolate it a little from the rest. 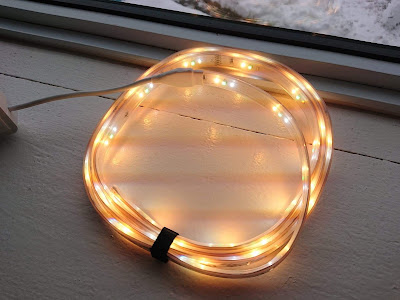 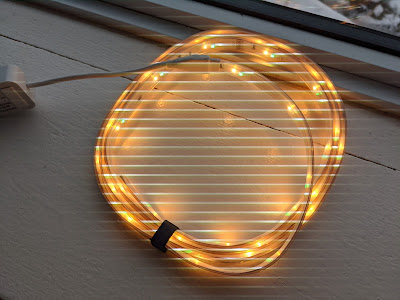 Man, the Pixel has bad frequency banding... the one above this is from the iPhone


And that's it.  You have control now with Google Assistant to turn on the 'front window lights' (or even easier I just named it 'lightstrip' so I can just say turn on the lightstrip).

Awesome.  Lighting in the window is neat.  I definitely need at least another 80" to cover the perimeter of the window without the bottom - and that's just the middle pane.  I haven't stuck it on yet as the wife and I are discussing how it would look best.  As I said, the lighting is neat, because of the way I set it, it's shining 'into' the window and with the drapes closed really makes it look like 'window display' like I need to be illuminating something.

I'll play still and find the right setup before affixing it in place.

All should be good, right?

... it's the holidays.  I want them to twinkle or flicker or cycle through some Christmas colours.

You'd think that'd be pretty simple in this day and age.  The Wiz lights have it as a mode in the app.  Not as simple to control it with the Assistant tho', but it's one touch via the app.

Unfortunately, Philips Hue still hasn't made the 'slightly more than basic' settings of their lights at all user friendly.  Want to turn it on, or set a colour you like, done.  Easy peasy.

Want to cycle colours or something and you'll have to go through the Hue Labs portion of the app.

You go in and try to search - but can't.  You can just scroll and scroll, and heaven forbid you click one of the labs to see if it's something you like and have to go back, you'll be at the top again.  It's pretty aggrevating.

Let alone, you can't find anything that's close to something holiday'ish.

You can just Google Search and you'll find a couple from way back in 2017.  Weird they don't show up in the labs, but they're findable otherwise.  I can sign in on the web, connect the bridge to that browser sign-in, and install the lab.

Should be good to go right?  I've installed a lab for a twinkling tree... so I should be able to just go into the 'routines' of the app and tell it to 'start'.

Sort of works... it's awkward as all heck.  Nothing works like it should, it's not telling me if it's starting or stopping... going into the main part of the app to turn off the light it'll just turn back on.  So I have to go back to the routine and say stop...

But whoah... how do I now have 3 of these routines?  Which is which?  I've deleted them from here and then went to the Labs again, and... they're there?

Delete them from there, back to the routines to ensure they're gone, nope.

It's a lot of wires getting crossed somehow that I just don't understand.  It's VERY confusing.

For something that should be as simple as "alternate between red/green/white".

In the end, I just gave up trying to figure it out.

Googling a solution found many people in a similar situation.

Philips Hue is really THE name when people think of smart lights, yet to do something more than basic controls, you're going to have to be even smarter... it shouldn't have to be this hard.

I love it, just wish that was easier to make it really as you like.

I found several apps in the Play Store where you can pay for a solution, I tried a few of the free ones and nothing still was as easy, so I can't imagine paying for it would suddenly make it easy.

Overall, I love the product... I'm looking at getting more for our windows (really will save me headaches from decorating the outside of the house) - I just wish it were easier to make it sparkly looking.
accessories Hue LED lightstrip Philips Review SMART HOME smart lights