Posted by Ryan Moore on November 11, 2019
Seriously, in this day and age of streaming, keeping cable is less and less of a necessity, and more of a luxury.  If you're like me (and many others these days) you probably have gone and cut cable and switched over to streaming or on-demand services.

When it comes to streaming, it's the age of the streaming wars.  Netflix, Disney+, Hulu, etc... lots of options for services to choose from.  What you shouldn't have to choose from is how to watch it.

Sure, there are apps for your mobile device, but no matter what, lots of us still have that big main TV.  Maybe it's smart, but will it have the ability to stream what I want?  Has Hulu made an app for my LG TV?  We could also connect our device (wired or wirelessly) to the TV, maybe... but then it's 'occupied' with sending that signal.

Best to just get a streaming box ... and when it comes to streaming boxes there's really only one choice... Roku.  I cannot express simply how simple it truly is.  I have countless friends, younger and older that prefer these because of how easy it is.

This year's line up is out now, where they've kept the StreamingStick+ but have new Express/Premiere.  I'm going to review the Premiere, which has the features of the Express but includes the ability for 4K & HDR display for the better TVs out there.  It's only like $5 difference right now ($40 - $45).

So, between the Express and the Premiere, the set up is the same.  They both are 'line of sight' remotes, meaning you'll have to have the 'box' somewhere visible when you have it plugged in.  It comes with both the HDMI and the microUSB cable (for power) in the box.

It also comes with a bit of double-sided face tape in order for you to want to set it somewhere specifically and make sure it stays (underside, or top of the TV, on your soundbar etc...).

The Streaming Stick+  is more like a Chromecast, where the stick is hidden from view, so the remote is then a radio option, meaning you can point it anywhere and it works.

Outside of the physical setup, putting together the software end is the same.  It boots up (will ask for a Wifi connection) and comes up with a Roku link, which you'll need a computer/tablet/phone to work in coordination.  If you don't have a Roku account, you'll set one up then. 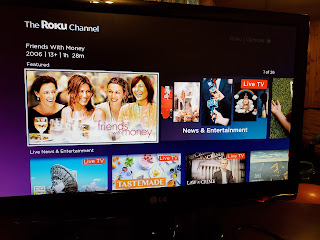 Now, on the non-Roku device you're setting it up with, it'll ask you to set up other channels if you'll want.  Mainly is the new Roku channel, a main streaming channel that helps you connect more easily to the other streaming options.

Outside of that, you're done.

Now just connect the phone app if you wish.

This app is especially useful for when you can't find the remote (the Ultra had the really cool 'find my remote' button), you could use your phone to control the controls.

Additionally, because the past year they've removed the headphone connector, and the voice search option on the remote, you can only do those through the phone app.

Another thing they removed out of the device (and they have made it super cheap, mind you) is the 'A/B' buttons.

Now, those buttons didn't really... really play any purpose before.  The idea was that ... I'm guessing ... there would be games you could play, but I don't think you really need those buttons for that.

We have some, but they're very simple games.

The buttons they do have on there are Netflix, Google Play (Movies & TV), Roku Channel, CBS. 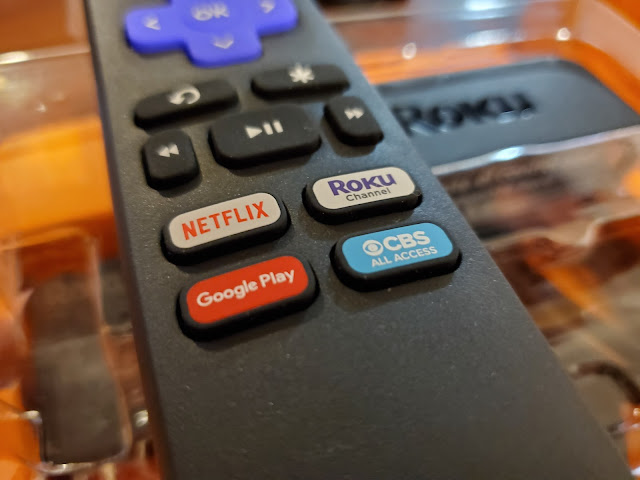 I really wish that they would let you customize those buttons.

I do love that they've kept the "OK" button in the middle of the arrow controls.  When I switch between my most commonly used one, the Roku 3, it has the OK button below.  Slightly awkward, but then I get the headphone jack and I get voice search options.

One thing that you also don't get with it - which for the price, I totally get - is an audio output.  Right now, it's connected to my computer monitor. Great, but there are no speakers there.  So, how can I get sound?  Not possible, unfortunately.  I'd have to buy some HDMI/audio splitter.

If you have some soundbar or stereo, you'll have to take the source audio from the output of your TV.

Something to think about.

Personally, my needs are a little more, and I'm willing to search a little to find another Roku Ultra.  There's an Ultra HD (4K/HDR) out there, but it loses the optical output.

The nice thing is that there's a model out there that'll be right for you.

Once in, the Roku navigation is so simple... you choose from their Channel Store a series of 'channels' that are essentially the 'apps'.

You'll need to remember your logins for those channels. Many are 'free' streaming channels, and don't cost (but you'll probably watch a lot of ads to do so), some require you to have a subscription (i.e. Netflix).

Navigating through it all is so simple, and Roku has worked very well to make sure it's as simple as possible for the user.  It's very intuitive.