I told you yesterday how Roku now has Tidal, but I've neglected to let you know about their 2019 lineup of hardware. 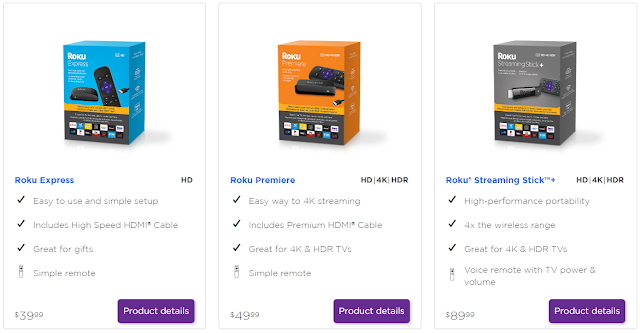 They're going to keep the Streaming Stick+ as it's been very popular, but updating their 2 boxes to be either the "Express" or the "Premiere".

I'll admit, I'm not super jazzed that even their top end player has dropped the radio remote and now it's IR, but then it does also work the volume controls (hopefully it'll be programmable so I can control my soundbar, and not TV).

Still, hands down the best options out there for you streamers.  I can't tell you how many people I've converted to this after they've seen how easy it is to use.

Check out their press release:


New Roku Express is Smaller and Can be Powered by Most TVs;
Roku Premiere Delivers 4K Streaming for Just CAD 49.99
Live Linear Channels Now on The Roku Channel in Canada

“We are delivering more value and improved picture quality across the new 2019 streaming player line up for Canada.The Roku Premiere delivers 4K HDR for a more immersive TV experience,” said Lloyd Klarke, Director Product Management at Roku. “Whether you are new to streaming or demand more advanced features such as better Wi-Fi, 4K HDR and voice search, we have the right streaming player for everyone.”

Roku Express
The Roku Express is 10% smaller than its predecessor, is sleek and designed to blend in and disappear when connected to a TV. It can be fully powered by most TVs to reduce clutter around the TV. With the Roku Express consumers can enjoy easy and smooth HD streaming. In the box a simple remote control is included with popular streaming channel shortcut buttons, a High Speed HDMI® cable and a power cord.

Roku Premiere
The Roku Premiere is a simple way to start streaming in HD, 4K Ultra HD or 4K HDR. It features a powerful quad-core processor and comes in a low-profile form factor. In the box a Premium High Speed HDMI® cable is included plus remote control with popular streaming channel shortcut buttons and a power cord.

New on The Roku Channel: Live Linear
The Roku Channel launched in Canada in 2018 and has quickly gained popularity. No subscriptions, fees or logins are required to access hundreds of free movies, TV shows and documentaries, with a selection of box office hits and TV shows featured every month.

Next to on-demand entertainment, Roku users in Canada will soon be able to access 14 live linear channel on The Roku Channel, from various publishers:

Availability and Pricing
The 2019 Roku streaming player line-up in Canada will be available beginning early October from Best Buy, Walmart, Amazon, Staples, The Source, London Drugs and other fine retailers: