Posted by Ryan Moore on November 15, 2019
Okay okay, settle down fandroids.. pitchforks down.  Yes, it's an Apple product review.  Well, a review for a product for Apple.  But, maybe we need to review this so that we see if it's good so that we could put pressure on the manufacturer to make one that would be for more than just one OEM.  Maybe I'm just being overly optimistic.

Apple phones need to be charged up.  A fair bit. Especially, if you're someone like me who has that battery fear.

I used to like keeping a short little cable, just in case.  But then I either need a battery to take with me, or I need to have a thing to plug in to.  I'm okay, I have a bunch of places usually within arms reach.  But not many people are like me.

I often see a bunch of Apple users who often are saying that they are nearly out of battery and maybe they'll have a cable, but no adapter. 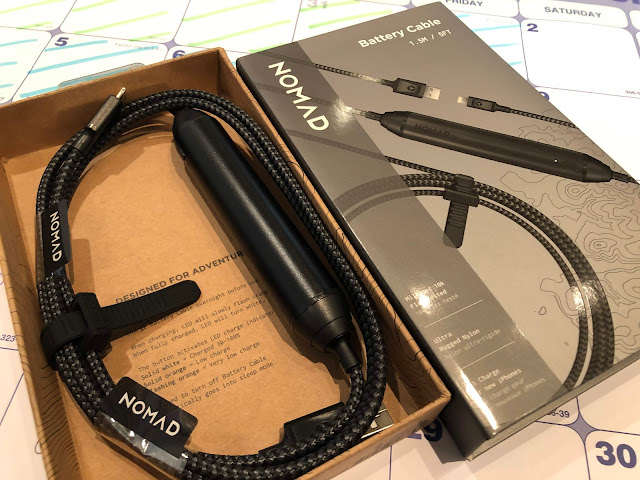 Well, Nomad saw that problem and upped it.  Let's put the battery INTO the cable.  Smart.  I know there was that "MEEM" cable a while back that had memory built into the cable so you can do data backups.  But we have the cloud for that.  We want juice.

So, the way it works is that you plug this cable into ... whatever.  A wall wort, a USB port on a computer, or another battery pack... it'll suck up some juice into its little reservoir and store 2800mAh of it. 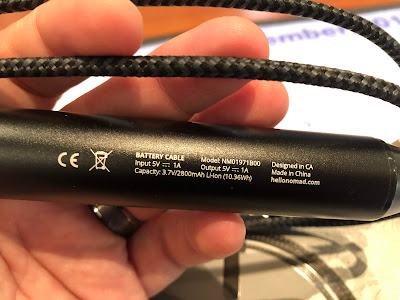 It uses some of the high quality cables we have come to expect from NOMAD (literally all my cables I use now are theirs, I don't really 'trust' much else, they're expensive but worth it) using their Nylon tho instead of the Kevlar.  Still good tho'.  I would have liked to have seen a little stronger housing at the ends, as this is really meant to sit in your pocket/purse and bounce around.

I do like that in order to help keep it organized it they include their heavy silicon cable tie.  These work really well. 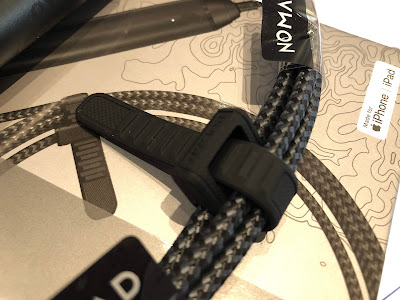 Determining if it is charged up gets a little dicey to tell.  It draws at 1A, so it can take a while to top up.  The single LED it has will have 3 colours. 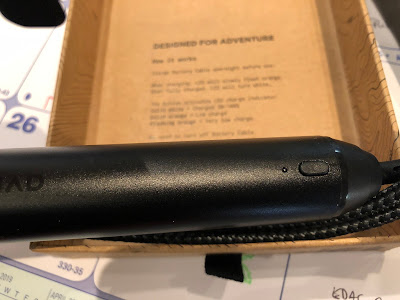 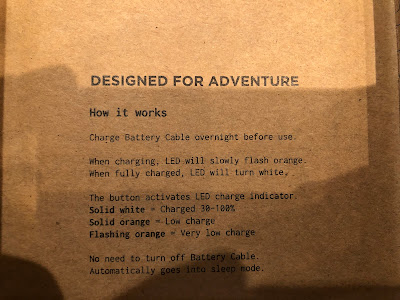 Luckily, more and more the USB ports are definitely more proliferate lately.  So you can always plug it in to charge up.

Then you just plug the lightning end to your phone and let it charge when you need. 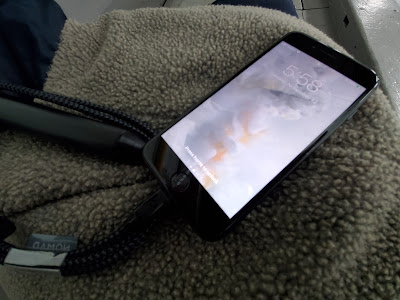 Now this is the part I would have to say they could work on.  I haven't had anything at 1A in a while... not sure... But I had the iPhone at 75% ... 60 minutes later and it had only climbed about 20%.  And then because it was hitting the top end of the battery it really slowed down.  Another 30 minutes later and it was only a few percentage more.

So maybe if you were really low on battery it might be faster on there but about the 90 minutes charging (and not using it too) would get me about 25%.

So it's not fast.  Be warned.  But it's not your main charger tho'... right?  It's the emergency option.