Pixel Buds - a marriage of Assistant and awesome headphones

Posted by Ryan Moore on December 28, 2017
So, apparently, I need a good set of earphones.  I have reviewed several dozen over the years, and I've been really enjoying many of them.

But seeing the Made by Google event it was very interesting to see their take on a set of headphones.  Wireless earbuds that have a connection to Google Assistant. 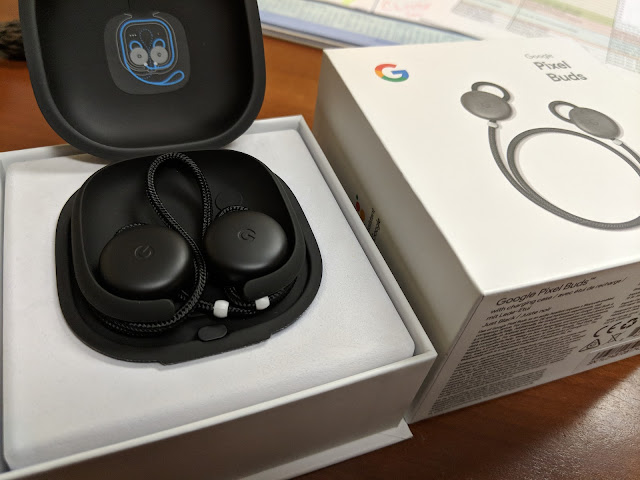 I needed to try it out.

When I saw the price tag of $219CDN they better be damned awesome. 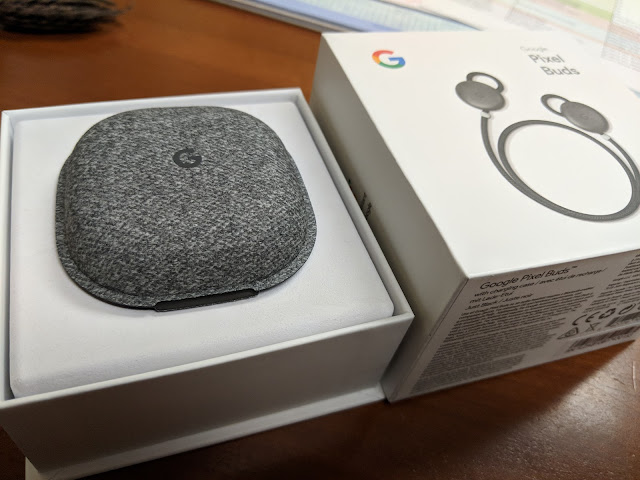 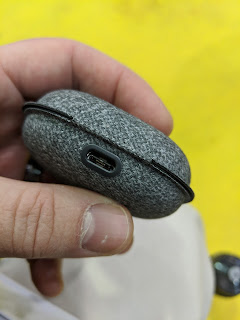 So, they come to me with that very cool 'Made by Google' style of packaging.  Upon opening it you're met with a very simple, mottled grey cloth case.

It's got a little USB-C port on the back to charge up the case (which, in turn, charges the headphones themselves).

The case holds about 620mAh of charge, and with the buds having a 120mAh battery, it should give you about 5 more charges before needing to be brought back to a charging area.

With the buds giving you about 5 hours of use, you'll get almost 24 hours of playback in total (mind you, needing to put the buds back in the case 4 times in between for some charging ... each needing about an hour to fully charge).

The little case opens up and is held in place via a little magnet in the front. 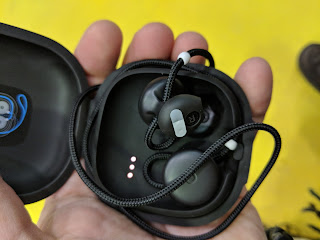 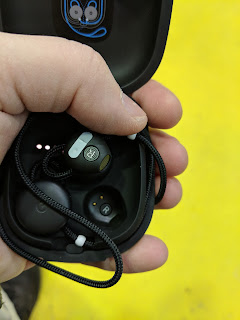 Pulling the case open you see the buds nestled in the case and the little battery indicator shows up.  3 little white dots.  There's also a tiny raised bump of a button to show the battery.

Now, there are little white pull tabs on the battery connections of the buds.  Pull them off and you connect them to their little spots in the case and they'll start to charge.

On the first time of pulling it out of the case (or leaving it in, I can't rightly remember) there's supposed to be a green icon, meaning it's ready to pair up.  With a Pixel, you should see a notification that something is trying to pair with your device.

Unfortunately, I never got that.  I read in the manual that if it doesn't happen you're supposed to put them back in and then hold the button for a few seconds to force pair.

It took me the better part of an hour fiddling around where I was to try to figure it out.

Eventually, you find somewhere deep on the internet forums that there's a hard-hard reset where you have to hold the button for 60 seconds ... then it changes from the white lights to a green one.

Then, I got the notification to connect right away.  If it's not a Pixel, you'll have to go through Bluetooth pairing.

To get the buds out, try to remember the method you took them out so you can remember how to put them back in properly.  There's a bit of a swirl thing to it. 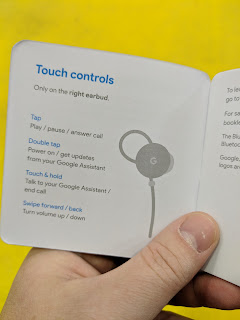 So, let's get to enjoying it.  First up, learn the touch controls.  Similar to the ol' Google Glass, the device had tap and swipe gestures.

Now the gestures all occur on the right earbud.

Tap it and it should start some music (but I've always had an issue with headphones starting up Google Play Music unless it had just been recently been used).  Tap it again to pause it.

I love the soft little 'boop' sound it makes.  It's soft enough to sound organic, but enough to know that it's a 'digital' sound that confirms there was a touch.

Swipe it back to front and it turns up the volume, swipe back and it'll turn the volume down.

There's no 'next' or previous, unfortunately.  Double tapping it gives you an 'update'.  i.e. it'll tell you the time and if you had any new notifications.

Speaking of notifications, when one pops up you'll hear the Hangout 'ding' and then you'll double tap it to hear.  It'll read it out to you and then if you want to reply (if it's that kind of notification) you can hold down the bud to speak and give your reply.

So, that brings us to using the Assistant.  Touch and hold the bud and speak and the Assistant will activate.  You can do all of your typical 'Assistant'y stuff.  Ask it the weather, read some news, answer a question to settle a debate.  Stuff you could do with your phone, but you get to leave that in the pocket and just look like you're talking to yourself! :)

The feature they showed off on stage was the cool option for translation.  Simply ask the Assistant to 'help you with translating X' and it'll start up Google Translate on your phone.  You have to hold down the sensor to talk ... and then your phone will speak it out over the speaker (if they have their own Pixel Buds, I'm sure it'll come over theirs).  When they have to speak you have to hold down the mic on the phone for them to work.

Pretty neat, but really, you could do that without the headphones.  Google Translate already has an auto translate feature.  This is just a different way for input and hearing the output.

So... that's about it for features.  Think of it like a Google Home device strapped to your ears.

But how is it overall?

Well, it's got decent battery.  Some may scoff, but really there's not much you're going to be doing that'll need more than 5 hours of continuous use... really? 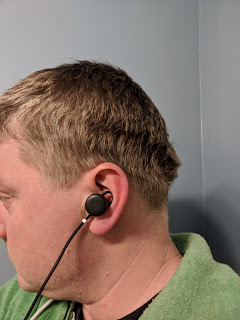 Besides, the way it fits in your ear... at least for me, I don't think I could stand much more than an hour or so.  It's just a little different.

I'm used to buds with a little hook piece going over that little cleft piece in the ear.  With these, there's a loop of the braided wire that you can adjust to how big the loop is and it fits against the 'back' of the ear to hold it in place.

And then with the little 'oval' of the speaker piece sets up against the ... apparently, it's called the 'tragus' and after a while I can really feel it pressing in.  Not that it hurts, but you can feel it has dug in if you move it at all.

Let me just start by saying it is, truly, the best sound of a set of earbuds I have ever listened to.  No really.  They are pristine in quality.  It doesn't get super loud, but what it does push out is the best well-balanced sound I'd heard before.  Rich.  Rich is the only word I can think of that really describes it.

Anyways, amazing sound only takes it so far.  Maybe $100 or so.  The Degauss Labs "Vice" are $125, so we're about $100 shy still from paying for this device.  Well, it also has the charging case that the Vice doesn't, so there's a few more bucks.

Is having the Assistant worth that price jump?  Not quite.  What makes up the difference here is the 'Google tax'.  For years I've joked about the "Apple tax".  The premium that Apple users pay to have an Apple product.  I think that's what closes the gap on price.  If you've got a Pixel this works extremely well with it.  If not, there's a bit more work in setting it up (mind you, only once).

In the end It's a set of headphones that would probably be worth about the ... say maybe $150 range.  Maybe we hadd a few more bucks for style.  But it still falls short on the value.

But, if you're a Pixel user you're going to want a set that matches in with the rest of your 'style'.