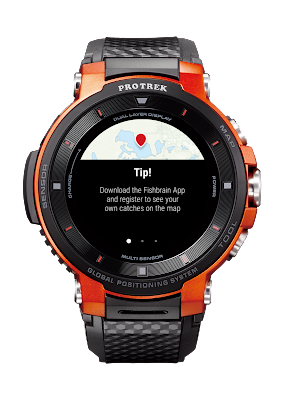 So, it's almost the May Long ... in Canada, the May Long Weekend (Victoria Day weekend), sometimes known as the ol' May-2-4 (it was years before I found out that didn't mean you were required to drink a 2-4 over the weekend), it also signals the opening weekend for Walleye (you may know it as Pickerel).

Very timely that the Fishbrain app (remember them, the Facebook for fishermen) has just paired with Casio, to have their wear app bundled in with the F30 watch.  (You can get it on any WearOS, but it's just included on the outdoors-friendly F30)

STOCKHOLM/TOKYO, MAY 15TH 2019, 06:00 PDT / 09:00 EDT / 14:00 BST - Fishbrain, the world's most popular social network for anglers with eight million users worldwide, today unveils significant updates to its WearOS app, with Google Assistant integration enabling anglers to log catches with their voice. Available as a featured app on the Casio Pro Trek WSD-F30, Fishbrain is also introducing BiteTime™, the world’s most advanced machine learning-powered fishing forecast, to a smartwatch for the very first time, providing premium users with cutting-edge analytical data, accessible on their wrist.

The updated Fishbrain WearOS app is a joint development between Fishbrain and Casio, with its functions being optimized for Casio devices that are designed to operate in widely varied environments, meeting users’ toughest outdoor needs. The new features require limited input from the user, reducing the need for them to take their phone out of their pocket or bag during a fishing trip.

Johan Attby, Fishbrain CEO and founder, comments: “By allowing users to log catches with their voice they can focus solely on the task at hand, landing that dream catch! The introduction of Fishbrain BiteTime™, meanwhile, enables them to digest accurate forecast data. Fishbrain is a perfect match for wearable devices such as the Casio Pro Trek WSD-F30, because often when you’re out on the water you aren’t able to pull out your smartphone, so by having such sophisticated technology on your wrist you are able to fish smarter, not harder.”

Austin Kazami, Senior Sales and Marketing Manager at Casio Smartwatch, adds: “Casio is delighted to be a partner of Fishbrain, and we are very excited to see the new enhancements on Fishbrain for Wear OS, with voice logging, a machine learning-powered BiteTime forecast, and easier map access all being implemented. With this update, Fishbrain is further demonstrating why for adventurous types the Casio Pro Trek WSD-F30 represents a much more practical alternative to a smartphone.”
Casio Fishbrain fishing SmartWatch watch Wear OS WSD-F30