Toast Case makes for a nice woodsy feel on my Pixel

Posted by Ryan Moore on April 22, 2019
Okay, so only recently have I put down my Pixel 3 XL... no matter what there just doesn't seem to be a better phone out there.  But that's a story for another day.

One of the nice things I like about the Pixel is the hand feel, even with the material case.  Well, recently I've tried out a new 'material' for a case.

I used to be a fan of having a naked device.  But, as I'm coming to learn, being able to protect your device is very important.  And aside from protecting it, you are going to want something that's unique to you.

Well, then Toast is pretty unique way for you to stand out - as they call it, "functional bling".  Essentially, it's a little mini 'ikea'/origami project made out of wood that'll wrap your phone.  Plus, they'll plant a tree for every one they sell! 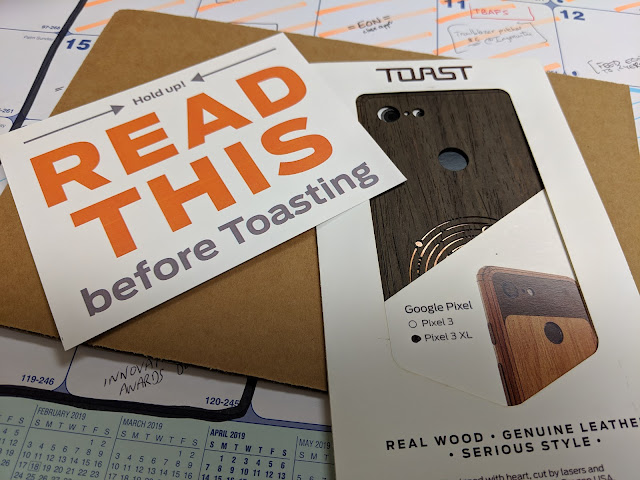 You order and what do you get? 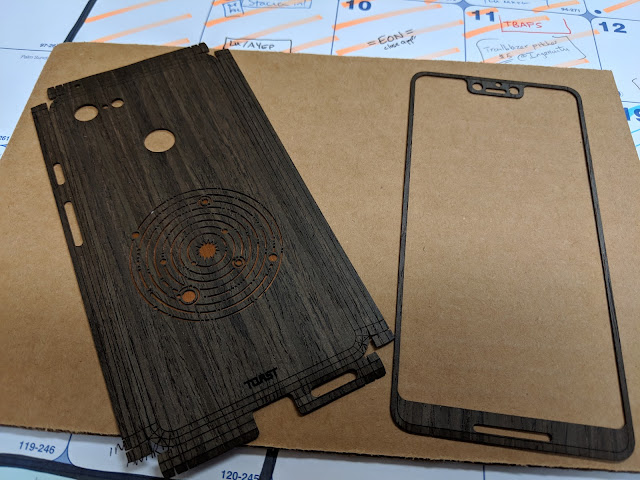 So, yeah, it kinda looks like a little project.  The wooden 'back' has enough wood to cover the back and then wrap around the sides of the device as they have like half grooves lasered in to allow it to bend.  It's pretty slick. 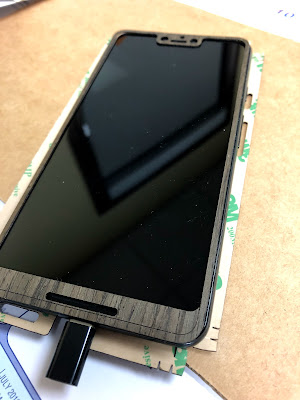 There's a sticker you peel off and allows you to place once you're feeling confident.  But don't worry, they do have a 'butterfinger clause' - essentially pay shipping for an oopsie while installing.

Was neat how they recommended putting your cable in the charging slot while you line everything up.

It was way less stressful than I thought lining everything up was going to be.  On the back there's less ... 'precision' needed than on the front.

I'm still not happy with how my front lined up.

Once you have the adhesive going you then start to 'roll' the device on its sides and edges to get the 'curl' around (take the cable out now).

Once the edges are on, you'll notice with curved corners you kinda have to roll those a little bit to get them to finesse just so. 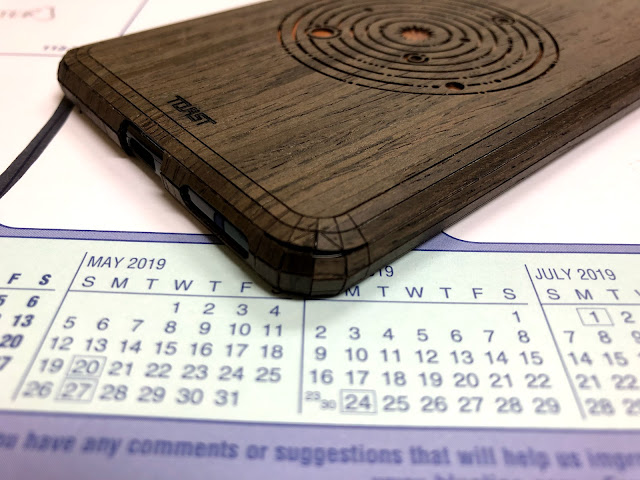 But it's so neat how it kinda falls into place.  Everything felt pretty 'delicate', but it falls in line just so.

And it looks pretty slick. 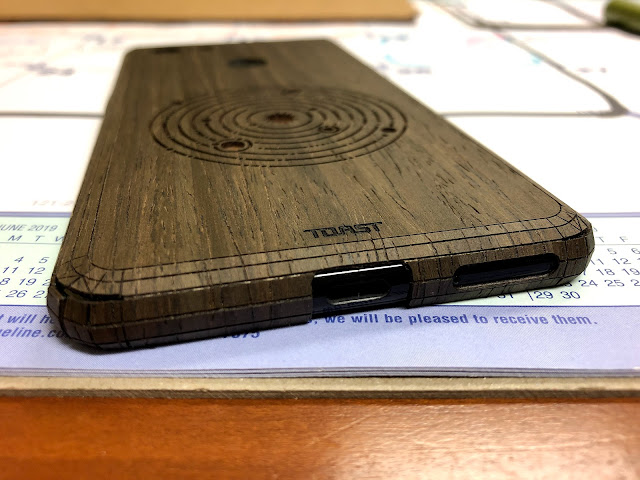 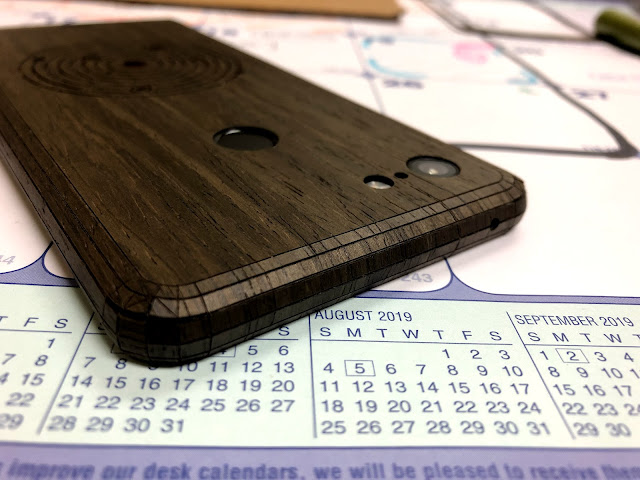 Now, it's not perfect.  Depending on how well I had pressed down there are some bits that look a little like it didn't hold right. 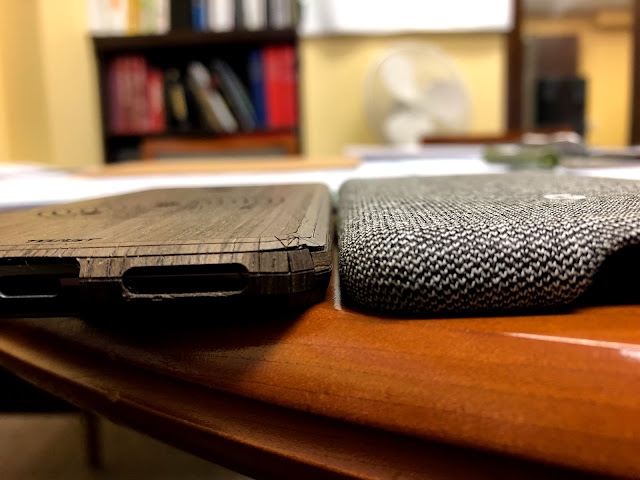 Just because it's not perfect, doesn't mean it's not good.  I hardly notice those little flaws when using it.

Now, you'll also notice that there are holes for the buttons.  It actually comes with little wooden 'stickers' that match appropriately to put on them. 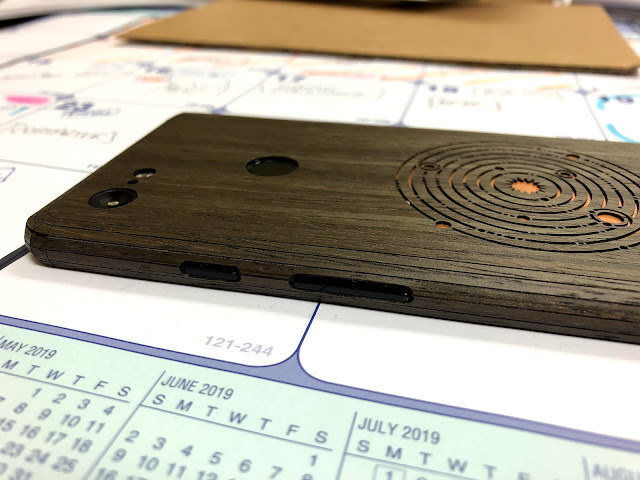 Definitely preferable to having to push buttons that are sunk in a bit of a recess.

I did leave the slat off of the SIM tray as it wasn't a perfect line up (I had to actually tear a bit of the wood off to get the SIM out later) and I didn't want to obsess over lining up that teeny tiny hole up for the ejector.

As you can see from the comparison to the other case, it is pretty low profile and it's a noticeable hand feel different as well as pocket feel.

Now, personally, I would probably opt to not have the front.  A) it didn't line up as good as I would have liked.  B) it really gets lint to stick to the edges on the front [albeit, without the front panel, it would probably stick to where the edge of the back came up].  I did like the fact that I could put the device face down without it resting on the glass.

Now, if for whatever reason you eventually want to remove it, it's fairly simple.  The wood easily will pull away (I nicked away a bit at the SIM tray) and some nudging will remove the back - so I'm told.  The adhesive just probably needs some friction to help clean it up.

It's heavily recommended to remove the button tabs first .. and when you do that, you should try to slide it off the button sideways... don't PULL.  Those buttons may pop out of their holding before the adhesive lets go.

Overall, I like it.  It's unique, it's new... I like the feel of that earthy wood.  It's able to be customized with the design/logo of your choice, and you can have other options of colours.  Plus - you can still wirelessly charge through it.

As a Canadian, the exchange and shipping can get a bit high, but there's nothing else out there like it.  So ... as they say with Android: "be together, not the same" - meaning be unique.  You do you.

I think this is a good option.