Posted by Ryan Moore on March 27, 2019
This took me a bit to get out there, there's a bit of self loathing here.  I could have been at the sneak peek in New York ... and I could have been there in Paris for the announcement.  Bit of a situation meant that I couldn't get to go (I'm not upset, it's really been a hectic time and it was the right decision in the end for me).  Le sigh...

That doesn't mean I'm still jacked to see the device in person when I get the chance.  Huawei (yes, I know that Huawei) has just released their new P series phones, the P30 and the P30 Pro.

I liked the P20 Pro - great battery, minimal notch, IR port, awesome camera.  Pair it with the ZeroLemon case and you have a decent gaming phone.

So how is the P30 going to top it?  Personally, I was hoping to get QuadHD display out of it, it was still going to reserve that for the Mate line up.  But, they improved the camera (added a whole new lens), gave it some more ram, included Qi and the cool fingerprint under the screen and reverse wireless charging!  All at the expense of just the IR blaster.

Let's take a look at what they launched:

First up the specs.  I'm going to compare the P30 to the P30 Pro and then give you a comparison to the P20 Pro to see what went up or down


The device is coming to a bunch of Canadian carriers for April, so have a look at your carrier and see what their specific pricing will be (and it looks like a few of them even have a deal for a free watch!!).

We'll be getting the Black or 'Breathing Crystal' colours. 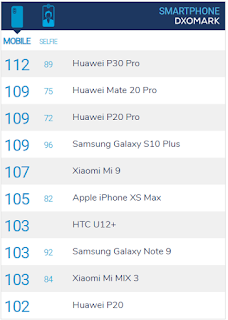 First up, the big advancement is that the camera is now the new DxOMark king.  Man, I don't even  see my Pixel 3 on that list any more (okay, it's #2 for selfies).

For those of you unfamiliar with DxO, they're the 'benchmark' folks that really evaluate cameras and come up with the ratings getting them a score and then show you the rankings for that.

What you'll notice is that they have their 3 lenses as per last year.  The telephoto version this year now has jumped up to 5x optical zoom equivalent.  That's going to be cool to play with.

What you may not notice is that the new 'lens' is a TOF sensor.

Without getting too 'fancy' in the explanation is that 'time-of-flight' helps with the ability for the camera to judge distances to the lens.  This is going to help with recreating appropriate Depth of Field shots, face recognition or any AR type work

There's also a new RYYB sensor on their camera.  Typically, camera sensors were RGB... like most monitors (personally, I still don't get how RGB works as those are the primary... but anyways).  This RYYB sensor has yellow (okay, now we have the 3 primary colours) sub pixels, which will allow more light into a situation (they say up to 40%).

This will allow better night time shots and stunning colours (really looking forward to pitting it against the Pixel 3). 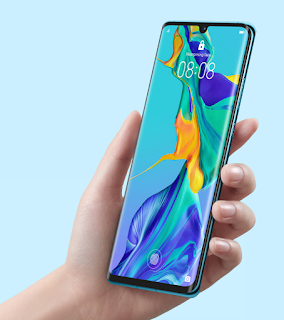 Additionally, what you'll notice is that it takes its hint from the Mate 20 where the fingerprint sensor is now embedded under the display.  I found the little bar last year to be someone cumbersome.  Plus the added advantage that you get MORE SCREEN for the body of the phone.

With the Pro model you'll also get Qi charging and similar to the Mate20 as well, the neat trick of reverse wireless charging.

So I could plug in my P30 Pro, and then turn it upside down and charge my iPhone 8 via the P30 giving off Qi.

Not bad at all!

Best of all, for those that are hating 'the notch', it's a very VERY minimal little 'divot' in the screen.  Similar to the Essential little blip.  So, it's hardly even noticeable.

I'm very much looking forward to this making its way to my hands.

PARIS—March 27, 2019—During an exclusive launch event yesterday at the Paris Convention Center, Huawei Consumer Business Group (BG) unveiled the HUAWEI P30 and HUAWEI P30 Pro. The HUAWEI P30 Series builds on the HUAWEI P Series DNA in design and photography and is the company’s most advanced series of smartphone cameras. These devices feature the innovative HUAWEI SuperSpectrum Sensor, an optical SuperZoom Lens, a new HUAWEI Time of Flight (ToF) Camera, and enhanced optical and AI image stabilization technology. With these revolutionary technologies, the HUAWEI P30 and HUAWEI P30 Pro capture incredible photos and videos in every scenario.

Richard Yu, CEO of Huawei Consumer BG, said, “the HUAWEI P30 Series is a fundamental breakthrough after decades of digital camera technology development; it will rewrite the rules and reshape everyone’s perception of mobile photography. Innovations such as the HUAWEI SuperSpectrum Sensor and SuperZoom Lens allow us to push the envelope of both photography and videography—a frontier long overdue for disruption. The HUAWEI P30 Series will set the pace for the next generation of smartphones by empowering people to capture the true beauty of the world around them through a device that fits in the palm of their hands.”

The HUAWEI P30 Series will be available in Canada from the following carriers: Bell, Rogers, TELUS, SaskTel, Videotron, Fido, Koodo and Virgin Mobile. Canadians can pre-order the new devices immediately.

The HUAWEI P30 Series will change users’ expectations of smartphone photography. Achieving a record-high overall DxOMark score of 112, the HUAWEI P30 Pro is equipped with a new Leica Quad Camera System, including a 40MP main camera with the HUAWEI SuperSpectrum Sensor, a 20MP ultra-wide angle camera, an 8MP telephoto camera, the HUAWEI ToF Camera and a 32MP front camera that takes selfies to a new level.

The 1/1.7-inch HUAWEI SuperSpectrum Sensor looks at light in a fundamentally new way. The RYYB HUAWEI SuperSpectrum Sensor deviates from the traditional RGGB Bayer filter by replacing green pixels with yellow pixels, yielding a high maximum ISO rating of 409,600 on the HUAWEI P30 Pro and 204,800 on the HUAWEI P30. This fundamental shift in sensor technology, combined with HUAWEI AIS, OIS and the HUAWEI P30 Pro’s f/1.6 wide aperture, delivers extraordinary photography and videography experiences across a wide range of scenarios and lighting conditions—including extreme low light—producing images with enhanced detail, colour and clarity.

The HUAWEI ToF Camera unleashes the imagination. Unique to the HUAWEI P30 Pro is a HUAWEI ToF Camera that captures depth-of-field information to deliver accurate image segmentation. Precise distance measurement allows for the simulation of multiple levels of bokeh. The Super Portrait feature captures even the smallest details, such as individual strands of hair. It combines depth information and proprietary algorithms to produce outstanding images with defocused backgrounds and highlights the subject of the image in any scenario.

Huawei AI helps users bring it all together into the perfect shot. AI HDR+ enables the front and rear cameras to combine multiple photos taken in quick succession to eliminate overexposed and backlit images.

Two views are better than one. HUAWEI Dual-View Video 1 can capture two perspectives of the same scene at the same time by using multiple cameras simultaneously. The HUAWEI P30 Series provides a full view of a scene while also capturing a close-up of a subject, unleashing new and exciting possibilities for video.

A Heritage of Stunning Design

Innovation is core to Huawei’s DNA. The HUAWEI P30 and HUAWEI P30 Pro are packed with industry-leading features that set them apart in power, performance and efficiency: