Posted by Ryan Moore on February 14, 2019
Okay, my son recently bought himself a Nintendo Switch and one of his favourite games for it (aside from Fortnite, obviously) is Human: Fall Flat. 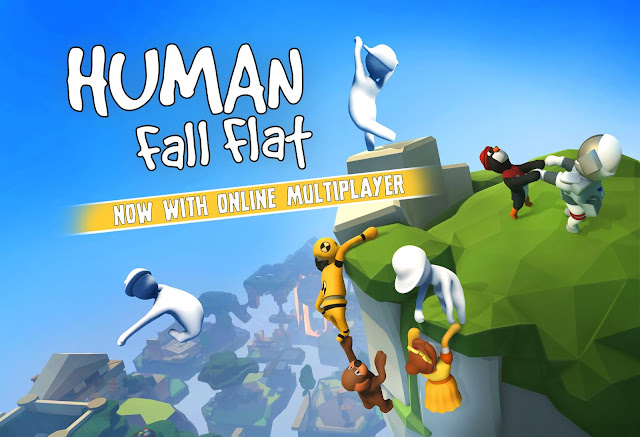 It's an absolutely ridiculous game with a simple premise... move some amorphous blob of a humanoid figure around to solve puzzles.  But similar to games like QWOP or Octodad - you don't really exactly have the greatest controls and it's hilarious watching you flip flop around trying to do the simplest of tasks like pick something up and place it somewhere else.

My son loves it on the Switch as he and his friend fight and just have a blast laughing at all the stupid things their 'human' does in the game.

Well, he's going to love it even more when he can play it on his phone - or get me to play it on my phone as it's going to be released on mobile soon.  (I wonder if we can local play across platforms?)
The game developers, Curve Digital, are partnering with 505 Games (which you'll know from Terraria, and Portal Knights, etc...) to bring the game to mobile.

Check out the presser below:

Originally created by No Brakes Games, Human: Fall Flat has found a huge global fanbase on PC and home console systems as a hilariously inventive 3D-platform-puzzler where players find ever-more creative and hilarious ways to steer the iconic but anonymous “Bob” to the exit of increasingly complex environments, alone or with friends.

“505 Games are proud to bring our vast experience of faithfully developing and publishing on mobile platforms to help our friends at Curve Digital bring one of their major IPs to an even broader audience,” said 505 Games President Neil Ralley. “Through our experience with Terraria and other mobile projects, we know how to optimise PC and console games to play on touch screens and ensure that the gameplay inputs and user interfaces are as intuitive as they are on other platforms.”

“Curve has sold over 5 million copies of Human: Fall Flat on PC and console, so we’re delighted to work with 505 on the mobile version. Their experience in marketing premium games on that platform is really important to us and No Brakes Games, the developer,” said Dominic Wheatley, CEO of Curve Digital.
The mobile versions of Human: Fall Flat are currently in development with Dutch developer Codeglue who was responsible for the original Terraria mobile ports.