Posted by Ryan Moore on December 09, 2018
Last year I really loved the Pixelbook, it even held up over time and it's my go to device when I get home and want to write out an article or bigger screen work (media, more in depth social media work, photo editing, etc...).

Then Google announced their new line up of "Made by Google" and I was hoping for a Pixelbook 2, but they released the Pixel Slate. 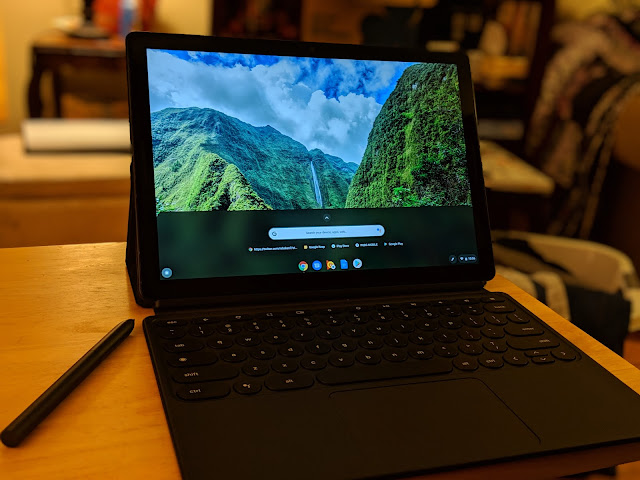 But is it worth it?


$1700 ... but let's see what you get.
So, that is the set up that I have that costs that much.  There are cheaper variants (less space or slower processors) and more expensive models too.

But let's talk about this thing.

At its base it is a tablet.  A huge tablet.  Without the keyboard case, it's a little unwieldly to be used by itself.  In my opinion at least.

Looking around the tablet it has a USB-C port on either side (it's hard to call it top or bottom in that mode) - they can be used for the adapters for HDMI out or for charging.

Typically, I rarely use the wall wart that's in the box, because I have a bunch of adapters everywhere, all over the house.

But with the Pixelbook unless I used specifically a PD charger, it would remind me that I had a 'low power charger' and it would be super slow in charging (if at all).  It was kind of annoying.

With the Pixel Slate if it wasn't THE charger, I wouldn't even get that notice.  Very odd.

Keep looking around the device there's volume control (but not headphone jack ... there's an adapter in the box for that, should you need it), but the best of all, there's a fingerprint sensor. 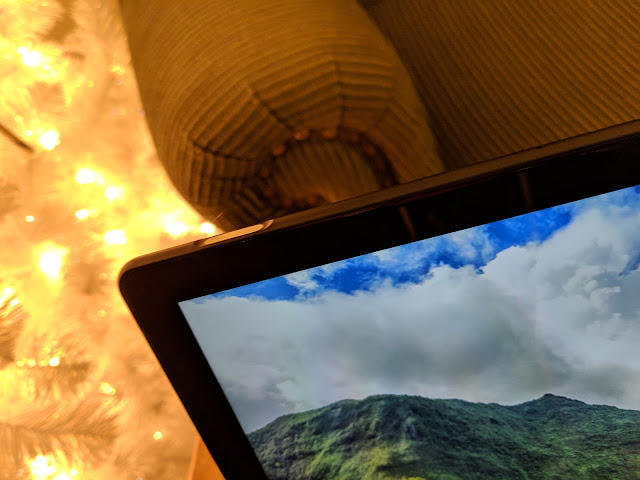 But, let's get on to that keyboard case.  Make, using it a little more manageable.

This thing is THIN 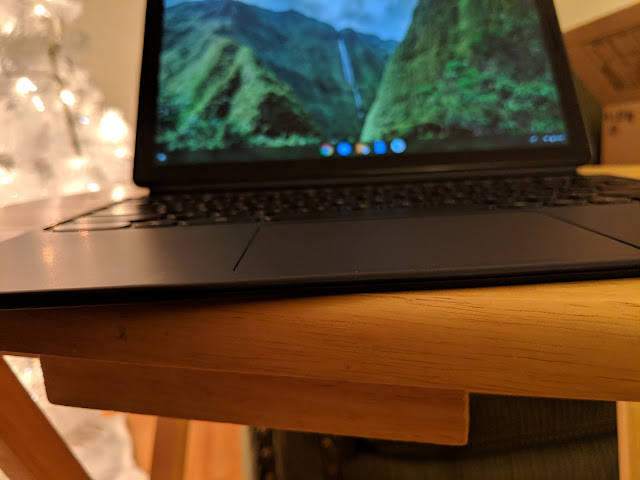 Like super thin.  It barely adds anything to the thickness of the device.  All said it's barely thicker than the original Pixelbook... but definitely thinner than toting the Pixelbook in that sleeve. 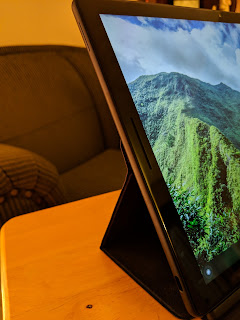 You fold the back part of the case so that you and prop up the display.


The magnets are very strong, well strong enough to not let the angle slip.

In the beginning, it's a little awkward to try to get that smooth motion of opening up the case and folding the back in the right way, but you find your groove eventually.

The downside of the configuration is that the 'hinge' of the case feels a little 'flimsy' on the flap. I'm sure it's fine.

But if you ever need to move the tablet you have to pick up and support both the tablet and the case or it'll flap some.

The keyboard itself is great. Having all the control buttons you need is great, and not just some of them.  The keys are sized just right for fingers.  No mis-hits. 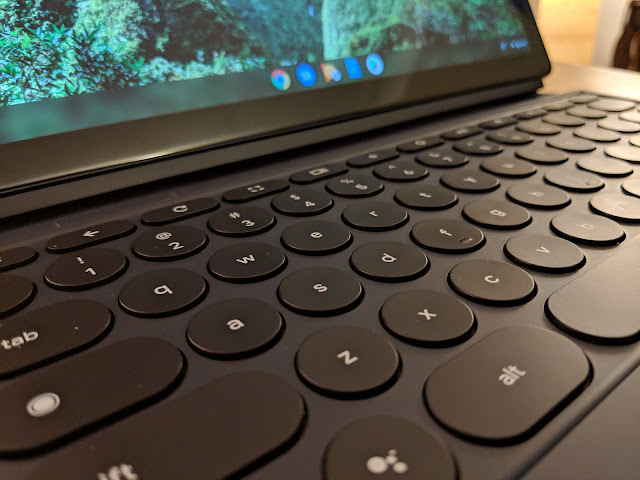 Best of all, it has a trackpad.  Not having one with others is highly aggravating.

The downside to the ultra portability is that with the way that the case props up the display it needs a few more inches on the back end.  This makes it much longer than a typical laptop. 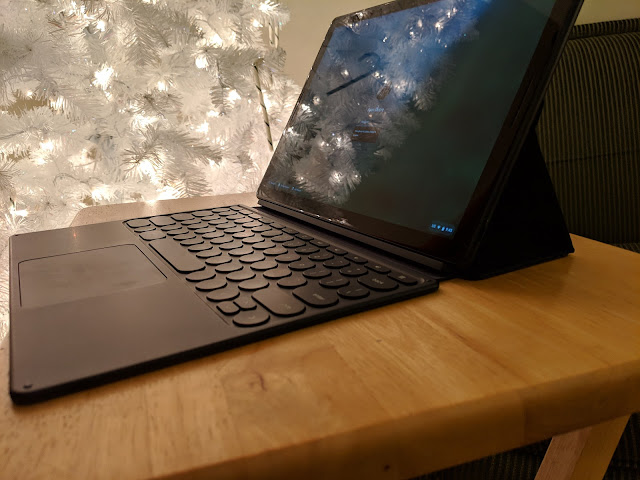 On a desk, it's just fine... but using it on your actual lap, or the arm of a couch, just forget it.  The hinge being a bit flimsy and the overall length makes it awkward to try to use.

Now, using another of the accessories, the Pixel Pen.  It's a great navigation tool and can do cool things like using it to direct where the Assistant can find info to search, or just for drawing and screenclipping.

But what to do with it when not in use.  With the Pixelbook Sleeve there's a holster for it.  With the Slate, there's no such option.  So, you've got to hold it like a regular pen and hope that putting it in your bag or pocket doesn't ruin the nib.

Okay, but how does it perform?

The display is... well phenomenal.  Really gorgeous screen... ultra high resolution!  Funny enough, if you go into the settings and ramp up the res (well, the 'apparent resolution') everything just gets SUPER tiny.  So I have it simulated to look like almost 1/4 of the resolution.

It's super responsive... then again, most of what I'm using are web apps, so not a lot of mystery there.

But it plays PUBG just fine (it is hard to play on such a large screen a game like that).  I tried to play Fortnite, but apparently to sideload APKs with Chrome OS you have to put it in developer mode and I just didn't want to wipe it all out (weird, I know, because everything is entirely synced with the cloud, and I'm not really saving anything to the hard drive that I wouldn't already have on the cloud.

The battery is also phenomenal - it definitely has some chops there, which is impressive as it's like even smaller than the Pixelbook.

The only issue I've run into was for some reason when I tried to do the instant mobile connection with my Pixel 3 it didn't seem to 'stick'.  I had a couple times where I was trying to show off how simple it was, it would connect after some steps, but then say it was disconnected.  If I set my phone as a hot spot, and connect the phone to that WiFi it worked fine.

Funnily, of course, it works fine in the video above.  D'oh.

Overall, this is a top end device.  But for the price, you're going to need to justify that cost.

When Google announced it they mentioned how they had given it to filmmakers who were astonished by it.  They need that ultra high resolution.

If you can swing the cash for it, you will not be disappointed by this beauty.
Google Pixel Slate Review tablet video