For me Qi is ... well, not a deal breaker for a phone, but such a sigh of relief when it exists.  You forget how convenient it is when you don't have it.  I've updated my work iPhone to the 8, just so I can use the wireless charger for either phone (or both).

All my daily drivers now can charge by Qi (Pixel 3 XL, iPhone 8 and my Moto 360 Sport, but it's a little harder to get on those pads).

So, when the Pixel announced not only Qi capability, but a dedicated accessory I was excited.

The Pixel Stand is ... well, a Qi charging stand that not only charges the Pixel 3 XL (and my iPhone 8) but has some tricks up its sleeve.  Well, that it should, seeing as it's $109CDN ... way more than just any Qi stand charger.

See, the stand charges rapidly for the Qi (still slower than USB charging mind you) on the Pixel 3 XL - clocking in at 10W, but it also has 'something' in it that allows the Pixel to enter in a special mode while it's 'docked'.

First up, I have to remind you to use the charger they provide.  I have this habit of leaving cables and chargers in the box because I have a ton of alternatives in the house already.  But ... nothing else worked with that.  Even my PowerDelivery wart for my Pixelbook ... don't know why.  Plus, I need to take that charger with me so I can't leave it with this stand.  At least they give you 1.5m  (~5ft) of cable for it.

Plopping the Pixel 3 in it brings up a special lock screen which gives you some more information than normal.

It can recognize the time of day and have a button for 'routines' with the Assistant. 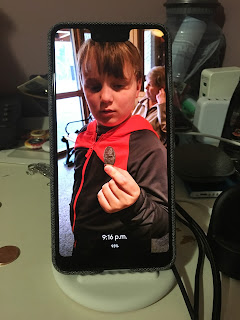 My favourite feature is that it turns the device into a slide show of photos.

How it chooses those photos, I don't know, it's a good random mix.

Thankfully, it also knows when it should and shouldn't be showing off and has no display while I'm trying to sleep.

It can also respond to your "Hey Google" questions while in the stand, just like a Google Home mini.

There's also a sunrise feature, where it'll start to brighten up the display before your daily alarm goes off to softly waken you.

To me, it's a glorified photo frame.   The assistant stuff I have handled because my Home mini is only a few feet away.

The sunrise feature is moot to me because I use the app Timely.  It doesn't brighten the display but has a gentle wake feature.

The premium to go from a normal Qi charging pad to this doesn't really justify it for me.