Qi ... it's one of those things that apparently you love or hate.  Especially if you've not used it.  Most people I run into say "wireless charging, meh, I don't need it" ... and then they get it and go "yeah, okay, that's pretty awesome."

For me it's become one of those... well, not deal breaker, but definitely something I put high on my priority list.  Just plop something down and it'll keep it charged?  Cool.  It's a little slower?  Sure, but if it's just going to sit on my desk anyways, why not charge.

When I need a top off I have a cord somewhere that's faster.

So, I mentioned having something just sit on my desk, and at my office, it should look like something that 'belongs' in an office environment (even in my messy messy office).

Nomad is just the company to make things look sleek and practical.  Today's product is the 'Base Station' (hub edition) and it runs for $100USD. 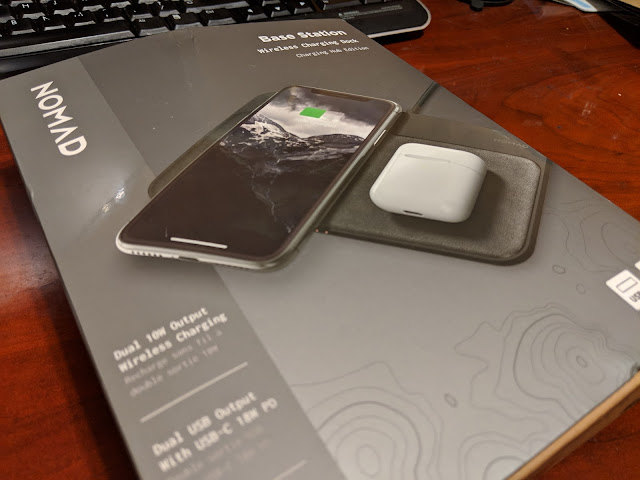 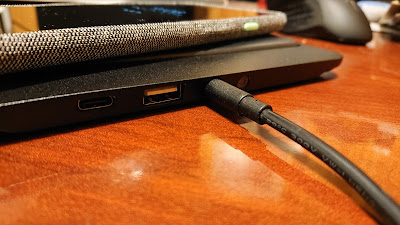 The main 'base is a 10W wireless charger made up of 3 coils.  These are so that either you can use it for one phone laying across it, or 2 phones on each 'side'. 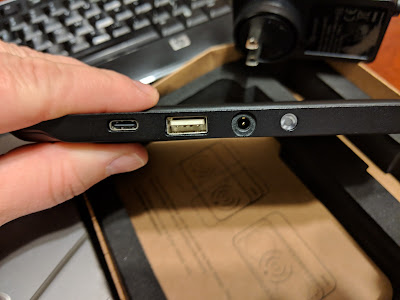 Which would be cool, I'm using the Nomad Wireless Hub currently and it's a little utilitarian at the moment and I still have a few cables spitting out of it.  I'm hoping to change my work phone to the iPhone 8 while I have the Pixel 3, so I could wirelessly charger both phones and then have a cable only if I really needed it.

So, how does it work? 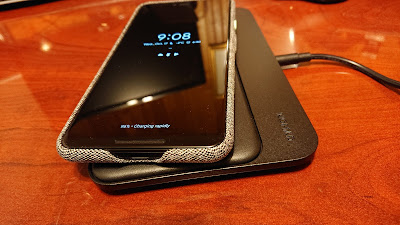 Putting the Pixel 3 on it took some finding to get the right spot. For it.  My Sony XZ2 has a real tough time finding the right 'angle'.  Getting it to lay horizontally and getting it in the right spot wasn't so bad.  Having it on the side took more finessing, mostly because the XZ2 just likes to slide around.

There's a little 'sensor' on the back to gauge the level of light in the room also to determine how bright the little charging indicators would be, which is great if I end up using it for my night stand charging. 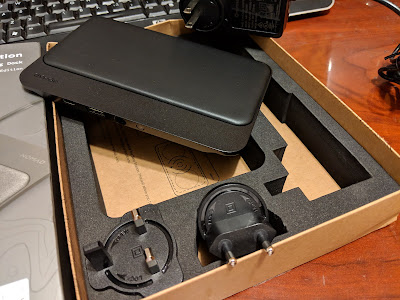 It needs to be plugged in, 'obviously,' and it's a huge honker of an adapter.

It even comes with the extra adapters for other countries.

Now, I would be remiss in mentioning this bit... and I must admit I'm cautious in talking about it.  I'm sure it's entirely really a concern and it's probably a one-off...

When I got mine, the box was a little beat up, but it was fine.

It would weirdly work occasionally, but never with both.  In my testing with the Pixel 3, moving it around the base to see if it would start to work, eventually caused my P3 to shut off... and it never came back on.  No matter what I tried.

I'm waiting on my replacement from Google to send them this to see what happened, and I'm sending the original base to Nomad for testing as well.

The 2nd base they sent me had no issues whatsoever.

They're so confident in their base that they sent me a 3rd for me to give away to one lucky reader.

So I'll be setting up a giveaway soon if you're interested.

It is a really nice charger.  The nice leather pad of the 'base' and low profile makes it a nice addition to any desk.  Having the ability to charge 2 Qi items is something that not everybody would need, but is definitely a bonus.
accessories Base Station Charging nomad Qi Review wireless charging