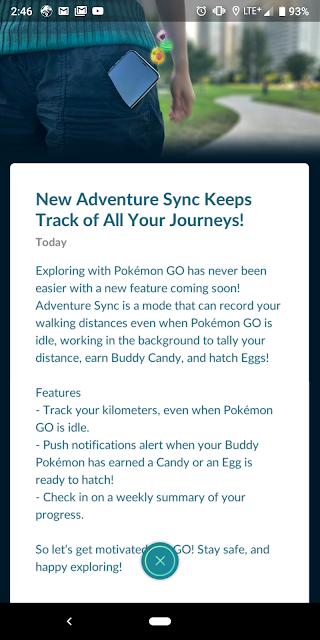 Okay, of course AFTER I have finished my kid's football practices.

See, while he was at practice, I promised that if he stuck with it, I'd stick with it and do laps.  So, while I'm moving so much I figure I might as well get some Pokemon eggs to hatch.

Problem is that unless you keep the app open it will stop tracking distance ... and 8km of running isn't something I'd like to miss out on.  The trick I'd come up with is to start Pokemon Go and then open the Pokedex... for some reason on that screen, it wouldn't let the display go to sleep and thus keep me tracking the 'kliks'.

It means having it on, somewhere in a pocket and hope that I don't accidentally click away from that screen.

An update today means that we won't have to worry about that.

It looks like Niantic's recent update will let you use Google Fit distance tracking for theirs... so the app doesn't even have to be open for you to earn those candies for your buddy or hatch an egg.

Here's hoping there isn't any further drain (because, yeah, that 8km it really would drain the battery).  But seeing as I'm already using Fit to track my moves and it's just taking that data, there shouldn't be any extra drain.

I don't see the feature yet, but hopefully soon.

The weekly summary will be available in your profile.
Games Google Fit Update