Keepsafe Unlisted - get a throwaway number

Posted by Ryan Moore on October 02, 2018
So, I don't know about you, but I've had this phone number of mine since I was like... 20.  This is the number that is ME.  But maybe ... like when I'm selling something on some site and I don't want to give them my real number.

Looking for ways to get a 'burner' number these days are sometimes important.  My son isn't going to get his own cell phone plan, but certain apps like Duo, Allo or Whatsapp need to have a cell number in order to work (I used a service a long time ago to get Google Voice), so getting him a number would be important for that (but you might need to make sure you have the number accessible later, keep that in mind).

There are plenty of options, but the one we're looking at today is from Keepsafe, who makes a bunch of apps, all around privacy, like a photo vault, a VPN, private browser, etc... including this app called "Unlisted".

As the name implies, it's about getting an 'unlisted number'.  They have a set of numbers accessible that you can choose from in US and Canada.

$2.99/month gets you access to that number and 10 texts or phone calls.  That doesn't seem like much, but if it's to get you access to a service for my kid ... no worries. 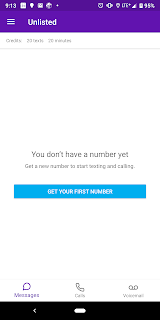 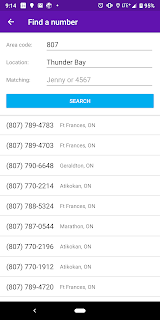 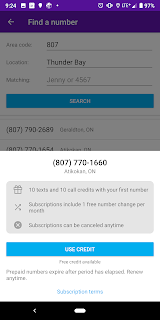 So now you have the number and the texts available to send or receive (kind of a burn that receiving texts - that you can't control - will eat away at your credit).

If it's not enough you can buy more. 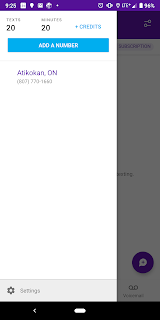 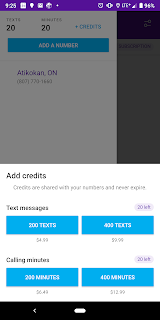 It'll come down to determining how many texts you think you'll be using.  Depending, you could look at an actual plan, but the point here is that you may not have one... or ... maybe you want both; like giving out a 'burner' number for selling online, or for those who are on the dating scene, not wanting to give out your real number.  Maybe you are starting a business and want a number that isn't tied directly to your personal line.

I had a client once who wanted to keep their out of town cell number but had to put a local number on their new business website (there's a feeling that someone with an out of town number isn't a local).

Something like this service would be a simple solution without having to get a whole new phone service.

Now, there are some apps out there that you can do the same but for free ... but without paying for it, then there's a ton of ads that pop up ... and the price to stop the ads would potentially put you at the same price as this.  Others for some reason really BURN through battery.

And it's nice that it's put out by a developer that has put privacy as part of its manifesto.  Makes sense.

For me, it would make sense to get this for my son.  Just sucks where we are as he can't get a local number (Tbaytel has a bit of a strangle hold on numbers in Northwestern Ontario).
burner keepsafe Review unlisted