Share photos on the wall with Photospring digital photo frame

So, it's no secret that nearly nobody prints their pictures anymore.  We shoot way more pictures than ever, yet they just sit on our phones, or sometimes on a website.

Sure, it's really easy to share those photos to each other, but then they sit on that person's phone... or computer.

Well, one way to enjoy your photos in the past was after you printed them, you would hang them on your wall.  Now there have been digital photo frames for a while, but they weren't exactly easy to use (I reviewed this thing 7 years ago and just not user friendly at all).

Photospring fixes all that.    They've dedicating themselves just to this sphere of electronic gadgetry and they definitely know who their target demo is ... people who like looking at photos but don't want to tinker.  So they've made their recent Frame super simple.  And they're on sale, just in case you know of that certain someone who would enjoy seeing photos but may not be as tech savvy as you are. 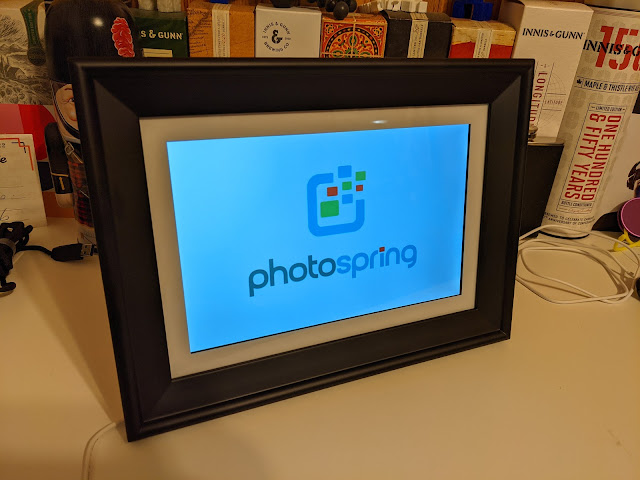 It'll run $159USD, which isn't too bad a price.  There is a cheaper 8" model, but if you're going to put something up in a room, trust me, you'll want 10".  There is also a more expensive Pro model, but from all I can gather it just has the built in battery.

But let's dive in.

So that's the first thing you notice when you get this box open.  For the 10" model, not only is it a decent size, but it also comes with a frame... a frame for your photo frame.  And it's a simple looking kinda wood style, dark frame.  It can fit just about anywhere.

You can take it off if you want just the white bezels, but keeping the frame on gives it that look of 'authenticity' of a real photo for your home.

There is a cord, so if you didn't spring for the Pro model, it will need to be plugged in.  So, either it'll sit on your desk and you can hide the cord, or if you want to hang it, you'll have to think about where so that you can plug it in still. 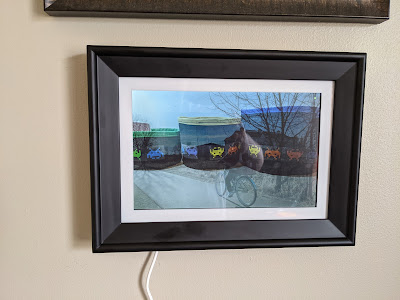 That was a real issue for me.  Not only does a bit of an unsightly cord dangle, but is it long enough to get somewhere hidden.  This will take some thought on your part.

Easiest is to set it up on a desk or end table near an outlet, and then it has a 'leg' you can screw on to the back to help it like a kickstand.

Going around the device we see there's options for a thumb drive, if you want to manually load it up with photos, an SD card slot and even a microSD if you wanted to plug it directly into a computer.

The options are nice, but remember, this has Wifi and is meant to sort of 'live on the cloud', which should make putting photos on there easier than fenagling with something physical.

You'll also notice there are speakers on there.  There is an option for it to play video.  I'll admit, it's something I'd never thought was necessary, but I can see the neat feature idea.  I didn't try it out with a video in the slideshow to see whether or not sound would come over.  I think that would be an annoying thing that once a loop suddenly there's "HEY SMILE FOR THE CAMERA".

But, let's press that power button and turn it on.

It's powered by a heavily skinned version of Android (so that means there's got to be a way to hack it and make it a low powered tablet)...

Heavily skinned as PhotoSpring really wanted it to seem super simple.  And it is.

But, while it's booting up, let's go download the accompanying app.

This is straightforward enough - sign up for an account with your email, and by then the frame is ready and is displaying a code that you enter on the app and blammo... they're paired.  Identifying you, holding the app as the 'owner'. 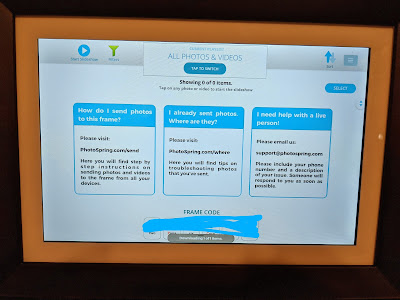 Next you get to pick an email address for your frame.

Now, they really make it clear that you're going to want to be careful with that frame's email.  In the wrong hands, ANYBODY can upload photos to it.  My son has been enjoying emailing random pictures of corn for some reason.  Yes... *C*orn.  He's 13.  Weird kid.

So, you have a frame at the ready and a phone app itching to go.

What can you do now?  Well, from the app you can just start picking photos and sending them on to the frame.

Or, give the email to someone and they can email it a photo.

Obviously, the email method is fairly slow, but even the upload process is also slow, because remember what's happening is I'm uploading the photos to PhotoSpring's cloud, the frame pings the cloud periodically to see if there's anything new and then downloads it.  So definitely not instantaneously like I've come to expect with just something as simple as say, Google Photos.

Speaking of Google Photos, you can also make a specific folder in Google Photos that will sync with the frame too ... 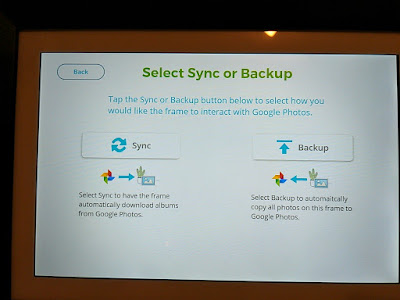 ...tho', it's not as simple as that, essentially you'll want to make a sort of 'intermediary' account, as once you connect a Google Photos account to the frame ALL photos start syncing.  So, they suggest you make up a separate account, link that sort of 'shell account' to the frame and then you can share from yours an album that's shared with the shell one.  They have a little write up here: https://support.photospring.com/hc/en-us/articles/360012725972-Connecting-with-Google-Photos-to-Display-Photos

Once you start getting photos on (and it's pretty neat to see that it knows new photos are there and has a little downloading icon at the bottom) you'll have your main 'gallery'. 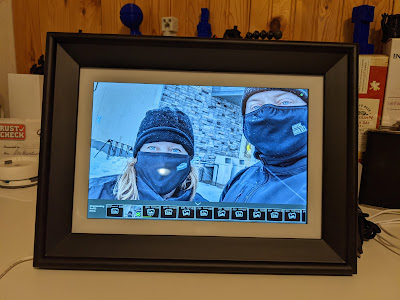 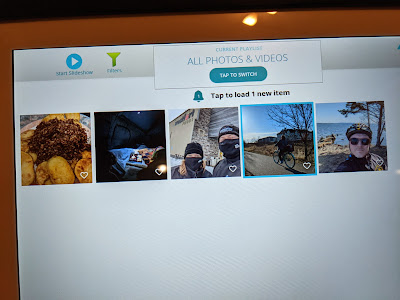 There you can arrange or sort, even put into folders (tho', I couldn't quite see how to view said folders you create). 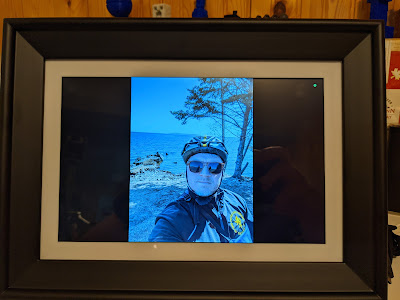 Tap a photo and you'll start the slideshow. 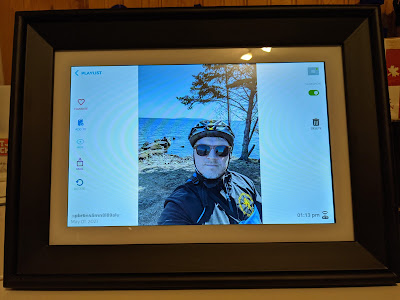 While in slideshow mode, tap the screen and you'll see the basic options appear around the photo (i.e. go back to gallery, etc...).

And that's the basics of it.  IT's a photo frame ready for you to have just a slideshow of whatever you upload or have emailed to it.

But what else can we do with it while it's up on our wall?

Well, in the gallery feature we can assign 'favourites', and then use that as a filter to only display your favourites. 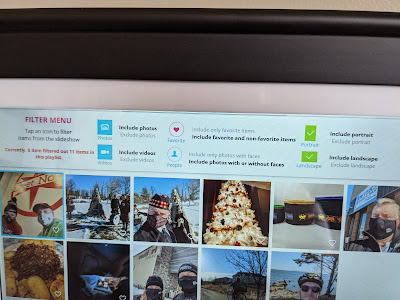 Like if you had a Thanksgiving dinner for family but only wanted to show specific photos instead of all of whatever was one the frame.

If you set it up, like say - give it to your mom - and then give all your siblings the email address, so we all send her a bunch of different photos, and there's a photo she thinks one of the others would want (because unless you'remade an owner or co-owner, you can't see the photos on it in the app, so you're just blindly sending), there's an option to send from the frame to someone else. 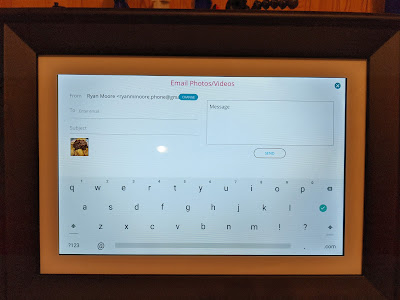 Remember, it essentially has it's own email address to send out from.

There's also the option of setting up a schedule.  Essentially setting up when you want the frame to go to sleep, you don't need it shining a light of the display at 3am. 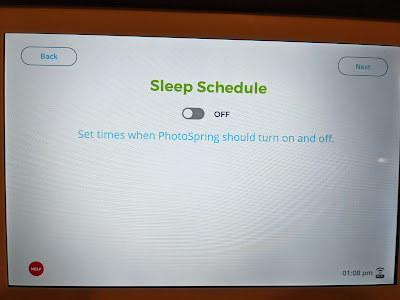 So just set up when you want it to 'turn on' and hten when it's to 'turn off'. 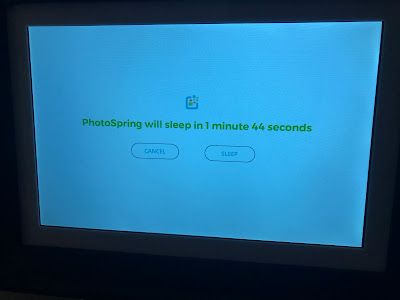 When it comes to the time to shut down it displays a warning, like if you had wanted to keep it going a little bit longer.

Overall, it's a decent quality resolution frame (not that you'd really see a difference across the room), decent size for most walls, and it has a really nice frame to fit in just about any decor.

But most of all the biggest feature about this is how simple it is for an absolute wide array of types of users.  So for a techie type person like myself it's just easy to use.

For someone like, let's say a mom (yeah, moms like to look at pics of their family ya know), it's just stress free use.  Nothing worse than giving someone a gift that causes stress - this will definitely not be that.

It'll make a great gift, and having multiple ways to allow people to interact with it is the secret sauce.  Not everybody's going to be accustomed to using an app.  An email realy makes sure more people are able.

Now, the trick is do I set it up as is and set it as a gift and make mom a co-owner ... or reset it for her?  (Giving it as a gift would mean they'll have to set up the wifi anyways, so might as well start from scratch on it)