Posted by Ryan Moore on August 05, 2014
Android is everywhere these days, and that's a good thing.  Everything we start to use is becoming more 'smart' and connected.  Take, for example, the digital photo frame.  Really popular over the past few years.  But most of them were simple.  Just load up photos and it'll show them. 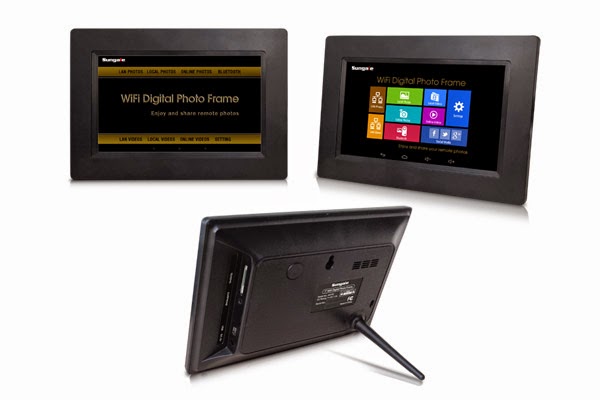 Now here comes Sungale's Android powered photo frame.  Not only does it have a storage of up to 4GB built in, but you can load it up with an SD card.  Not super differentiating, but it does come with Wifi and Android.  Couple those together and you have a Smart Photo Frame.

The Android allows for some customized user interface, and the Google Play Store platform to throw in some other apps.  Wifi allows you to bring in the cloud feature.  Now it's talking my language.  This is a photo frame I can get behind!

I got to admit... I'm one of those shoot and archive type photographers.  I take some photos (not a lot, but some) and then they get put into archive and I rarely ever look at them again.  We all know printing them would be a waste (expensive, and if I'm never looking at them on my devices, I'm not going to pull out a single use photo album either).

The Sungale option is nice that it does have the Google Play Store, so that almost equates it to a real 'tablet'... except it's dedicated to showing pictures.  It does have sound option if you want, but the single core 1.2GHz processor just isn't up to the task to handle regular tablet usage (you can see how it performs in the video below).  Then again I can be a little overly harsh as I'm used to the latest, screamingly fast, flagship devices.

It can display all your local content (files you transferred via miniUSB or SD card) or with WiFi tap into your LAN and see shared content.  You could also look through the Play Store and find dedicated photo apps to set up as a slide show; they've included "DayFrame", which lets you set up your slide show using local and online content (they've got plugins for G+, Facebook, Flickr, 500px, etc...).

I've found that if I try to plug in my Google account that it slows the already sluggish device down (probably because it turns on the background syncing for ALL my data... and that starts to bog it down a lot), so be careful you add it to the app and not to the "Accounts" in the device.  I liked setting it up with 500px's cool photography (way better than my own), but you could set it up to read from a specific Dropbox folder you set up (I didn't look at the settings and then it started showing ALL of my crappy photos... so definitely set up a specific folder and tell the app to just watch that one).

All in all, it's a pretty decent frame.  Sure on paper it doesn't look that good (single core processor, 1024x600, etc...) but it really beats looking at your pictures on paper.  You can find the device for just under the $100 mark and it's not badly priced when you see others out there


What I'm reviewing is the 7" model, but there are multiple versions out there; a 10.1" version and there's even a 14.1" size that comes with a remote as well.