It's been just about a week today playing with the new phone and I do have to say I'm impressed.  Couple it with the deal for a free TV when you buy one and it'd be hard to say no. 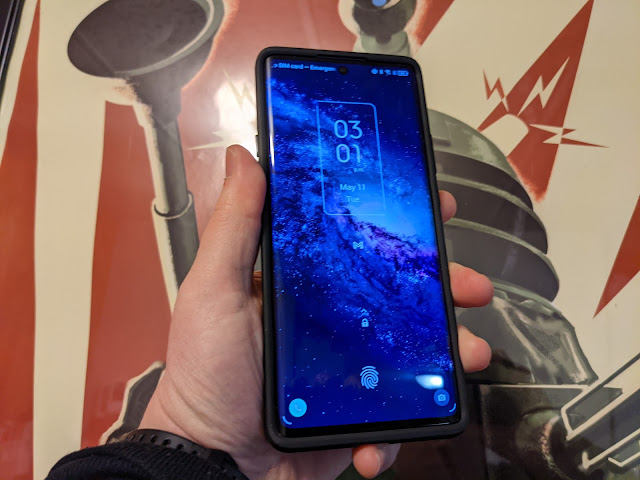 Let's have a look at it.  This isn't a FULL review, rather a quick overview of some of the initial thoughts of this $750CAD option.

So far, my simple comment about it is "tall".  Maybe I'm just so used to the Pixel 5 and my work iPhone 8 that anything is BIG now.

But not only tall, it's got so little bezel to it.  Feels immersive.  It also feels a little slippery in the hand, so put on that case.

The phone is pretty well stock but some minor customizations.  Like the app drawer is default set to 'category', or you can sort it by colour if you like.  Or how some apps have a little animation when you exit them back to the home screen.

One of the noticeable customizations is the 'edge'  that you can swipe out from a side and have apps or contacts at a simple grab, or you can even use a ruler there.  That's neat.

The display is good enough, it's not as noticeable it's not QuadHD, and it's fairly vibrant.  I did notice that some times when I'd use it that it looked to be adapting to light shifting from a bluish to a yellowish.  I also notice a a slight blue tint at the bottom when it's a white screen at an angle.

It's not terrible, nothing that's a deal breaker, just not 'perfect'.

It performs well enough for normal things, but I did notice some stutter on games like Fortnite and PUBG.  Fortnite noticeably so. Anything else was totally fine: watching Youtube, reading websites, scrolling social media.

Speaking of playing games, one thing I've noticed is it doesn't seem to have true stereo, no opportunity to use the earpiece as a speaker, so PUBG trying to find out where enemies are approaching from by sound alone is not going to happen.

The camera - for all the 4 eyes it has - I foudn to still be a little lacklustre.  It's good enough, but I've lived with Pixel cameras for so long that I'm used to stellar.  Most pictures had a bit of a cool, lower contrast feel to them.

So, yeah, there's some sacrifices, especially as one who comes from a 'flagship' sort of lineage.  But, the upside ... it's about half of the cost of a true flagship.  Only $750.  And it has 256GB of storage, so lots of space.

Then there's the battery - 4500mAh (and it's Qi to boot).  It seemingly is holding for a long while.  I would expect a little further, but it is a huge screen.

Well, that's it for my initial impressions, I have a few more days to collect my thoughts and put out a full review.  If you have any specific questions, just let me know what you'd want to hear about.