There's just an absolute huge need for mobile computing these days.  Whether it's to conduct your remote school class and change from bed to desk to living room couch; or you want to enjoy your next zoom meeting in your backyard in your hammock.  Having a device that moves with you is important.

And there are just a ton of options out there.  I like having switched entirely to Chrome OS and the simplicity it serves, tight integration with my Google services, and really good price points.

Case in point, this here is the Acer Chromebook Spin 514. 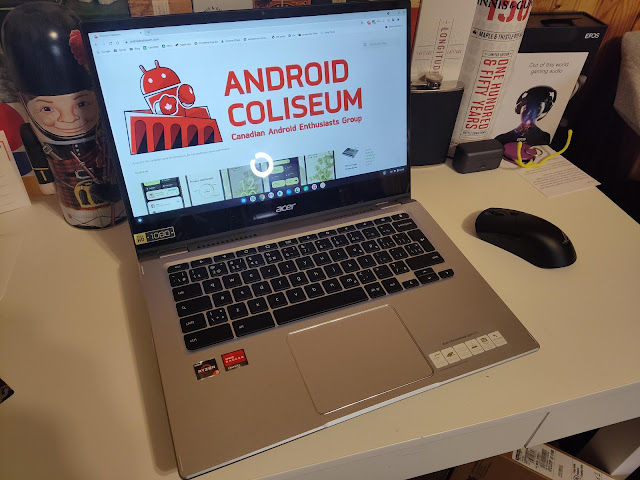 It's only $600 - which for laptops is a really decent price neighbourhood, so how does it stack up?

I gave it a 'spin' (pun) and also gave it to my son for a whirl while he navigates his remote learning for school - let's see if this option is worth its money.

First, let's run down what specs you get from shelling out $600CAD 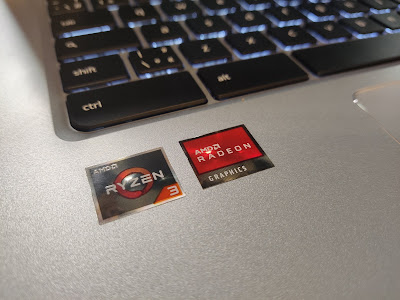 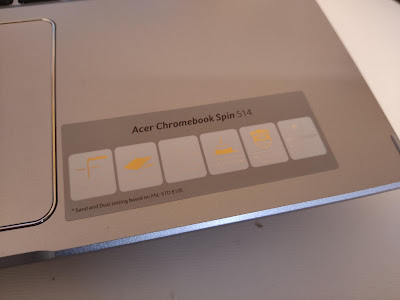 First up when you grab this laptop you're going to be surprised at its heft. It's chonky, but doesn't look it.  Sure, it's a little thick near the hinge, but that's mostly because it does have that 360 degree flexibility.

It's a lot of metal, which lends credibility to the fact that with the metal built frame it has a MIL-810-STD rating - meaning it doesn't need to be treated with kid gloves.  Nice.

Opening up the hinge you get a 16:9 wide screen and it's nearly all display with pretty small bezel.

The display is good, it's higher resolution than you'll discern and colour reproduction is good.

But let's look around the device.

Immediately, I love the fact that they put the USB-C power port on both sides.  I think that has to be a given on any future laptops.  Nothing proprietary, and accessible on both sides.

It's also got USB-A on both sides. 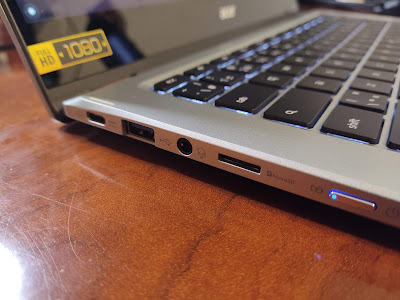 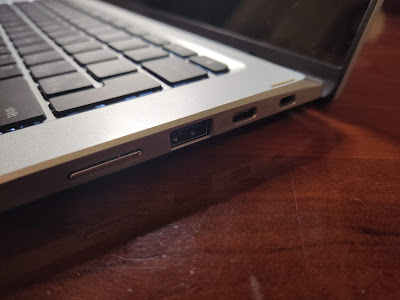 Power button on the left, volume on the right, rounded out by having headphone jack and microSD all on the left with the power.

It has the 360 hinge, not that I really ever use it, I just love the 'ability' to use it if needed. 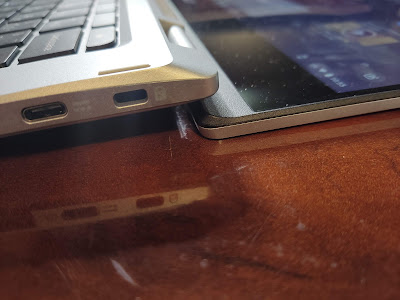 Not sure if that's just something someone overlooked or not, but you would think that you'd want it to lay flat.

So let's use it now.

Like most Chromebooks, it's get everything you'd need.  Plunk in your Google account credentials and all your Chrome apps show up, favourites, etc.. simple.

In moments it was working just like any other Chromebook I had used.

With just a funny extra bit.  Normally, you can set up your device to use your Google password to log in, and then once logged in, it can convert to using a PIN.  I do that with my son's older Chromebook so I log into it for him once a day and then until it reboots he just uses a PIN (long story where once he knew his login he racked up some expenses on the family account).  Here, it's an either/or scenario.  Once you've logged in,  you can go to the settings and make it so that you ONLY ever use the PIN ever again.

Kept playing around and would notice intermittently my mouse disappear or jump from monitor to monitor. I chalked it up to "it's still setting itself up" and kept plunking away with some of my work on it.

It kept happening.  I'd be writing an article and suddenly the cursor would stop blinking and my typing wasn't responding.  Hrmm... ultra weird.

Once a week we have a Facebook video chat with some friends and several times in the couple hours the screen would just 'refresh'... like it would exit out of the window.  I thought it was just a Facebook app window thing (really actually played havoc with the Messenger, saying I left the call, then re-started a new one).

I chalked it up to "Facebook's being weird".

But, continually as I used it, I noticed some slow down and stutters.  Something my kid kept calling "lag spikes" he noticed when using it for school, tabbing between Docs and Teams and Discord etc...

I found quickly that if I just had one tab doing one thing, not a big deal.  But add in a tab for YouTube or a streaming service, then a couple more for social media, blog writing, and flipping between them all it would really start to weigh the device down.

And I'm not talking about really bogging it down with something heavy.  Something like a music streaming, a few tabs... light 'work'.  Maybe at most a medium load of work.  Medium, and it still was having some difficulty being able to chunk through the effort.

My son didn't even try to use Steam on it for Minecraft, which aside from the ability it as showing it lacked, the space is another issue.

Sure, 64GB is a lot if you never save anything physically, everything's in the cloud, but sometimes there are apps you may want to download - you really will have to watch what you put on with 64GB.  I mean most phones START at 128GB nowadays.  Sure, you can have the microSD card, or plop in an external drive - but you can't easily install apps on those as well.

Anyways, all this to say that I was unimpressed with its lacklustre performance.

It started out feeling like it would be a good contender.  Looked good, sleek... felt hefty (and I never did even mention how much I liked the keyboard)... yet it clearly has some limited boundary on its ability.  It barely outperformed my son's older Acer R11.  I mean, it did out perform, clearly it did.  But what's the real issue is that it seems to zip along just fine and then irritatingly hit you with lag and then frustrate you for that second or 5 where you don't know what's going on.  In about a few hour work session on it, it happened way too often for it to just a 'glitch'.  I was definitely pressing it into areas it didn't do so well.

Which is a real shame.  Great price, good looks ... but only good if you're a light user.  If you want to push a little harder, be prepared for a little more cost.